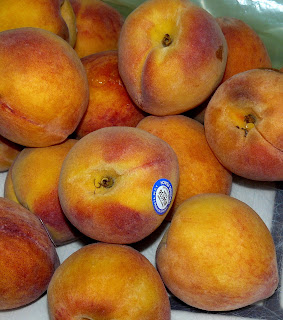 Once upon a time, a long long time ago, Texas Monthly ("the National Magazine of Texas") featured recipes on the last page of each issue.

While the series ran, I always turned to the back of the magazine first thing to see if what was there that issue would be anything I'd be interested in attempting. The recipes ran the gamut, from exquisite gourmet appetizer supplied by an up and coming chef to tried and true down home favorites, like a little beauty of a recipe for peach cobbler.

The Gourmet Gals' Hill Country Peach Cobbler recipe, which ran in the July/August 1989 issue, was a treasure that quickly became THE way this family would eat peach cobbler from that time forward. I nearly went crazy(er) waiting to try it, though.

The magazine with the recipe came out well past when it was easy to find peaches at my local grocery store. This being 1989 it predated the steady stream of peaches now available from around the country, much less around the world. Farmer's markets were scarcer than hen's teeth and roadside stands were all shuttered up for the season.

I had nearly a year long wait until local peaches were available again before I finally had my chance to reproduce the cobbler. That I held on to the recipe and managed not to lose it in the disorder that passes for my kitchen is testimony to how much I wanted that cobbler in my repertoire. As I dug the page torn from the magazine out of a pile of "important papers", unfolded it and carefully smoothed the creases out I remember thinking to myself, "this better be good...".

Was it ever. I've since prepared this peach cobbler recipe for friends, family, and fellow Lutheran church members in four different states over the course of the nearly twenty years since I first laid my hands on it. It is as good today as it was then, and the only difference between the way I fix it now and the way I fixed it then is that now I insist upon organic ingredients. Truth be told, since the peaches are peeled, I'd make it with conventionally farmed Texas peaches in a heartbeat rather than do without. It just isn't a proper start to summertime without a few batches of peach cobbler. 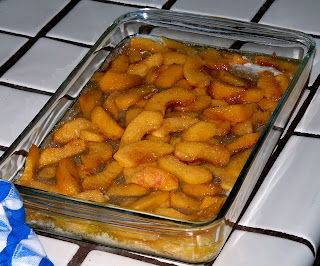 Here is the recipe the way it was printed in the magazine.

According to the description that precedes it, "From a small catering business in Amarillo to their present incarnation in Austin, where they've feted British Royalty (Prince Charles) and Texas common folk, Gourmet Gals are all over the map. This simple cobbler has an appealing, almost puddinglike consistency. "With the trends in Southwestern cuisine, we've kind of overlooked simplicity" says original Gal Betsy Nozick. "This recipe is so just-what-it-is." 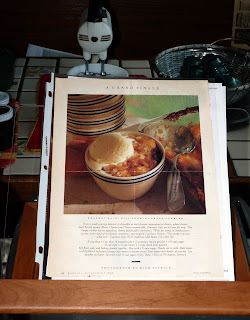 Gourmet Gals has since expanded, moved from their original Anderson Mill Road location and is now dba Gourmet Gals and Guys Catering and Events. Betsy Nozick and Tricia Henry have co-authored a book, "Texas Tuxedos to Tacos, The Mystique of Entertaining in Texas". Their newly expanded version has been recently released and is available from their website. 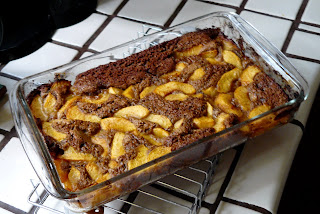 One note: I used unbleached unrefined cane sugar in this batch which is why mine has such a deep brown crust. I thought the additional layer of molasses-ish flavor in the unrefined sugar paired well with the brightness of the peaches, and to my great relief  it worked out great.  In all honesty that was luck, not skill.  I used that sugar because it was what I had on hand.

I've told you I am not a patient woman.  That first year I spent waiting to find peaches so I could try the recipe nearly killed me.  That was all the waiting for cobbler I could stand.  Once I'd made my mind up to have peach cobbler today I just went for broke rather than waiting until after a trip to the market.   Me, wait for cobbler?  No no no no no.
You may think you already have a peach cobbler recipe.  I am here to set you straight.  If you aren't making this peach cobbler, you might as well give me your peaches and let me show you how it is done.  Or save us both the trouble and just make this peach cobbler.  Right now.  Go! The only hard part of this recipe is waiting an hour for it to bake.
Quick postscript:  I contacted Tricia Henry to ask permission to share this cobbler recipe with you here.  I'll admit when I heard back from her nearly immediately I was surprised. Folks, I gotta tell you she is about as gracious as a summer day is long.  I suppose you don't have to be a generous and sweet person to create a great peach cobbler recipe, but in this case, that is sure enough the way it worked out.
Posted by TexasDeb at 6:30 PM

Yum: I have not made cobbler in eons, and this looks fab. I recently tried a peach tart tatin and thought i'd died and gone to heaven, though! looks delish, especially that caramelization. :)

CandQ, welcome! The cobbler is indeed delicious and if you try it I can promise you won't be sorry. Hop to it while the fresh peaches are plentiful however. Wouldn't want you to have to wait to try this one.

I too ripped this page out of a magazine. Except I live in California and it was from the July/August 1989 edition of Domain Magazine. You're absolutely right, this is the only peach cobbler recipe that you need. Thank you for posting, I'm too lazy to open my cookbook so always look for it online. :)

LetUsEatCake: I'm glad you were able to find this here when you needed it. It is an all time favorite of ours and we all get a little extra excited when we know fresh local peaches are heading to the markets here.