OVERPOWERING GARLIC ALERT/ADDENDUM!! CODE RED - SOUND THE ALARMS!!! The recipe that follows calls for what we here at AustinAgrodolce, in consultation with Significant Others Who Shall Remain Nameless have determined is too much garlic. WAY too much garlic.

So much garlic in fact that, if Sookie Stackhouse tried this recipe (it could happen!) her vampire boyfriend Bill would drop her like a silver cross. It is our considered opinion that you try this with one clove of garlic and add more only if you think you need to. This is supposed to be a cool sauce after all and the 4 cloves of garlic moved it over into hot garlicky territory. Not awful, just not tzatziki.

It was also agreed upon in further discussions that the "chop finely" instructions for the cucumber did not specify that the degree of teensiness desired from the chopping would be as if you ran the cukes through your food processor and stopped just when they were at risk of stopping being discretely tiny bits and becoming a cucumber mash. In other words - use your processor to chop the cucumbers very very finely. We clear on that now? Good. Proceed! 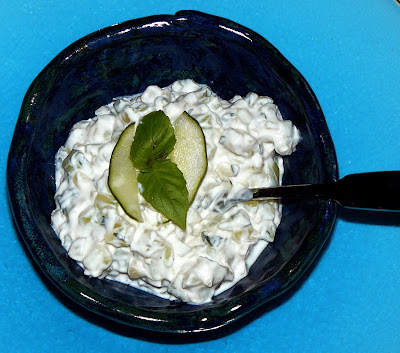 You know how sometimes trying something new completely gives you the heebie jeebies?

So much so that you find all sorts of reasons (appearing to rational outsiders as "excuses") not to ever actually try the recipe out?

These are those recipes, you know the ones, where you pretend you will try them only to actually read them and discover they involve two hours of something sitting dripping into a pan. Or they require a specific kind of vinegar or a special whisk or something, anything, so long as it is something you don't have or forgot to get, so you bail.

Over. And Over. Again.

This heebie-jeebizing is what has kept me from making tzatziki sauce for months now.

At first I didn't have plain yogurt in sufficient quantities and I was concerned cutting the recipe in half wouldn't yield a reasonable amount. I also didn't have a very sharp knife and it calls for a lot of finely chopped bits. The Hub often doesn't like tangy stuff much. LawSchoolGirl doesn't particularly care for mint.

So why, you might wonder, did I keep thinking I wanted to make tzatziki? Because, that's why. Because when I had the sauce with gyros in Salt Lake City Utah where we used to live 148 years ago I really really liked it. 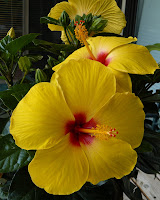 Because it is summer time and in summer time I like to eat cucumbers every possible way. Tzatziki sauce is, after all, at least partly about the chopped cucumbers.

Because everywhere I turn for the past two weeks; newsletters, Food Network shows, you name it, I have been bumping into lamb or other Greek style burger patties served with some version of a tzatziki sauce. 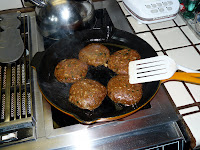 Wheatsville's Gurus of Meat now offer seasoned lamb sausage patties that look scrumptious so I bought some. I wanted something authentic to serve with them and tzatziki sauce isn't just fun to type and fun to say it was screaming at me that it was JUST THE VERY THING TO SERVE WITH LAMB PATTIES FOR DINNER. IMMEDIATELY. IF NOT SOONER!

Of course I'd forgotten you have to let yogurt drip for at least two hours first so I bumped the lamb patties from dinner one night to dinner the next night to allow sufficient time over the bowl.

I have a great new knife (thank you again from the bottom of my chopping block, chef son!) so the many finely chopped ingredients in tzatziki now represent a joyful aspect to the recipe prep rather than a challenge.

I have basil growing out back which I feel is a decent substitute for mint for my non-mint fan in the house.

I have a few Hawaiian sweet bread rolls on hand I need to use up, rolls that are foods of the gods and will serve as the perfect foil for a seasoned lamb pattie with a tangy sauce, sooooooo.........

Having knocked all my potential objections out of the way, tzatziki sauce time it is. I put the recipe elements together so they could rub shoulders and do the Vulcan Flavor Meld in the refrigerator all day.

It is nearly dinnertime now and I did a followup taste test an hour or so ago and noted the garlic was absolutely kicking ass. I did use one ginormous clove as two of the suggested four cloves and in so doing I may have inadvertently bumped up the garlickity quotient of the flavor profile by about 80 percent.

Hey - that is a risk I, as a committed garlic lover, am quite willing to take. Not much of a risk really as I think the flavor of the lamb can stand up to as much garlic tangyness we can throw at it honestly. Especially in combination with buttery couscous and a Hawaiian sweet roll.

Just at the moment I can barely type for my stomach growling in anticipation. My mouth is watering so much my keyboard is in jeopardy. For whatever reason, after months of playing with the idea and coming up with lame excuses not to? Now that I have finally made the daggum tzatziki sauce I am absolutely chafing to have it be dinner time already [!!!] so we can just eat some for heaven's sake.

Can anything live up to the hype my feverishly anticipatory brain is concocting? Man, I sure enough hope so.

I hate recipe letdown more than you can imagine.

At the moment however everything is all sweetness and light and Man I Can't WAITness. Dinner Tonight: Seasoned Lamb Patties from Wheatsville served with Tzatziki Sauce, Buttery CousCous, Hawaiian Sweet Bread Rolls and sliced fresh fruit. Yum yum yum yum yum. I think.

Here is the recipe I used - Alton Brown's version from the Food Network. I let my yogurt drip overnight so may be slightly short the 1 1/2 cup mark but what I've got is pretty close. I've thrown other substitutions and notes in parens. In several other recipes I found they suggested at least a two hour resting period in the reefer so as previously noted I made mine this morning so it could sit.

TZATZIKI SAUCE
•16 ounces plain yogurt
•1 medium cucumber, peeled, seeded, and finely chopped
•Pinch kosher salt
•4 cloves garlic, finely minced (I used 3 because one of them was HUGELY large)
•1 tablespoon olive oil
•2 teaspoons red wine vinegar (I got a little splashy with this - may be closer to 3 tsp)
•5 to 6 mint leaves, finely minced (I subbed 5 large basil leaves from the garden)

Place the yogurt in a tea towel, gather up the edges, suspend over a bowl, and drain for 2 hours in the refrigerator. Place the chopped cucumber in a tea towel and squeeze to remove the liquid; discard liquid. In a medium mixing bowl, combine the drained yogurt, cucumber, salt, garlic, olive oil, vinegar, and mint. Serve as a sauce for gyros. Store in the refrigerator in an airtight container for up to a week.

And, drumroll please.....HOW did it turn out? Great, thanks! LawSchoolGirl noted most gyro sauces are more blended than chopped so I may give the sauce we have left a whirlygo in the food processor and use that in pita pocketed lunch versions of the leftover lamb. It was pretty durn garlic intensive but garlic is good for you, and we will happily be in Vampire Avoidant territory for a day or so as a result. Maybe mosquito repellent as well. 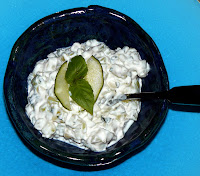 I am not sure why I have such trouble learning and holding on to the lesson that trying a new recipe is more often fun than terrorizing, even if it does not turn out precisely as planned. There are areas in life where I consider myself to be a quick study, but learning to be more adventurous in the kitchen is not one of them, obviously. That said, Tzatziki sauce is no longer a stranger in this household so I look forward to many many more visits. Opa!
Posted by TexasDeb at 5:10 PM

Thanks for the recipe. Newflower market on Manchaca @ Wm. Cannon sells their own sliced Gyro meat in the deli section, but their T. Sauce is pricey.

Welcome, Frank! Hope you like the recipe. I chose the most basic model I could find. There are plenty of others out there with additional ingredients if you decide you want to dress it up a bit. I'd love to hear back if you try this.

I was like that for the longest time about making bread from scratch. I didn't do it for YEARS becuse of a fear of yeast, it was too hard, it wouldn't taste good, it takes too long, etc...

BUT, in the last year I have made several breads, and home made english muffins, and they all came out great! Face the Fear!! That's become my motto!

I just came to your blog for the first time. My brother is Charlie from Back to the Fridge, I saw you on his blog roll. I'll be checking back to read more!

Jenn - it is great to have you here! I still harbor dark thoughts about yeast breads after watching a show that was a breadmaking troubleshooting episode and noted that the loaf I'd been happy with featured fully 3 of 5 "most common failures" of home baked breads. Sigh. I like your motto and am inspired to try to conquer that fear now.....once it cools off a bit again (safely well into Oct.). Please drop in any time!

kudos to you for making tzatziki! I absolutely never knew that you had to let yogurt drip for two hours. I would never, ever do that. It is way too much of a PITA (pain in the you know what) for me these days in my life, being a newly graduated law school girl myself

BUT, since you seem to like that flavor so much, and you love to eat cucumbers every way just like I do, you might like a sauce that I do: I often eat thick cucumber slices in a yogurt sauce I make with just some minced or chopped garlic, cumin, and lemon or lime juice. Also add a little salt, if needed. It is also a really great dip for sweet potato fries if you don't make them sweet and make the fries with a rub of, say, cumin, paprika, s&p and a touch of cayenne.

You can use that type of yogurt sauce on tacos, too, in place of sour cream. I have mostly switched over to yogurt sauces in our house for health benefits and find that it is delicious when blended that way.

Thanks for sharing the recipe!

Siren- thanks for sharing your own recipe tips here because you're spot on. I love cucumbers any which way and your sauce sounds great. Hope you'll drop in any time.