A dear friend of mine organized and leads a once per week session of yoga exercises at a nearby church.

Though I don't attend worship services there or attend the yoga sessions either one, I remain on the email reminder list for each session, because I don't want to miss the gentle urgings that are delivered right along with the class meeting times.

Each message reminds me to slow down, pay attention to my body, and gently care for myself, all as part of my caring for the world around me.
Most recently the class reminder included the observation that (and I'm paraphrasing here a bit) "when the third Christmas cookie did not satisfy, I slowed down enough to realize I had never been hungry for the first.".  This slowing down and taking in, he went on to say, is an ongoing part of yoga practice.

Yoga is, for him, intentional attention, a "practice of noticing".  For my friend when it comes to yoga, his goals include a degree of presence and attention that moves the class sessions from exercise to meditative spiritual practice.

It struck me this morning.  The way my friend approaches yoga is the way I approach gardening with native plants in order to attract local wildlife.  For me, gardening this way requires more practice in noticing.  Working in and around the earth becomes, on a good day, a meditative spiritual practice.

Happy Holidays to all.  May your days be merry, bright, and filled with the wonder of growing.

Cloudy with a chance of Sulphurs

Winter arrived in Central Texas, took one look around, and apparently decided to wait a little longer before unpacking its bags.  Thanksgiving and the span of days immediately after were sunny and warm, blustery in ways that may have been challenging for our fluttery friends, but at least one local was not discouraged from doing what Momma Nature called upon her to do. 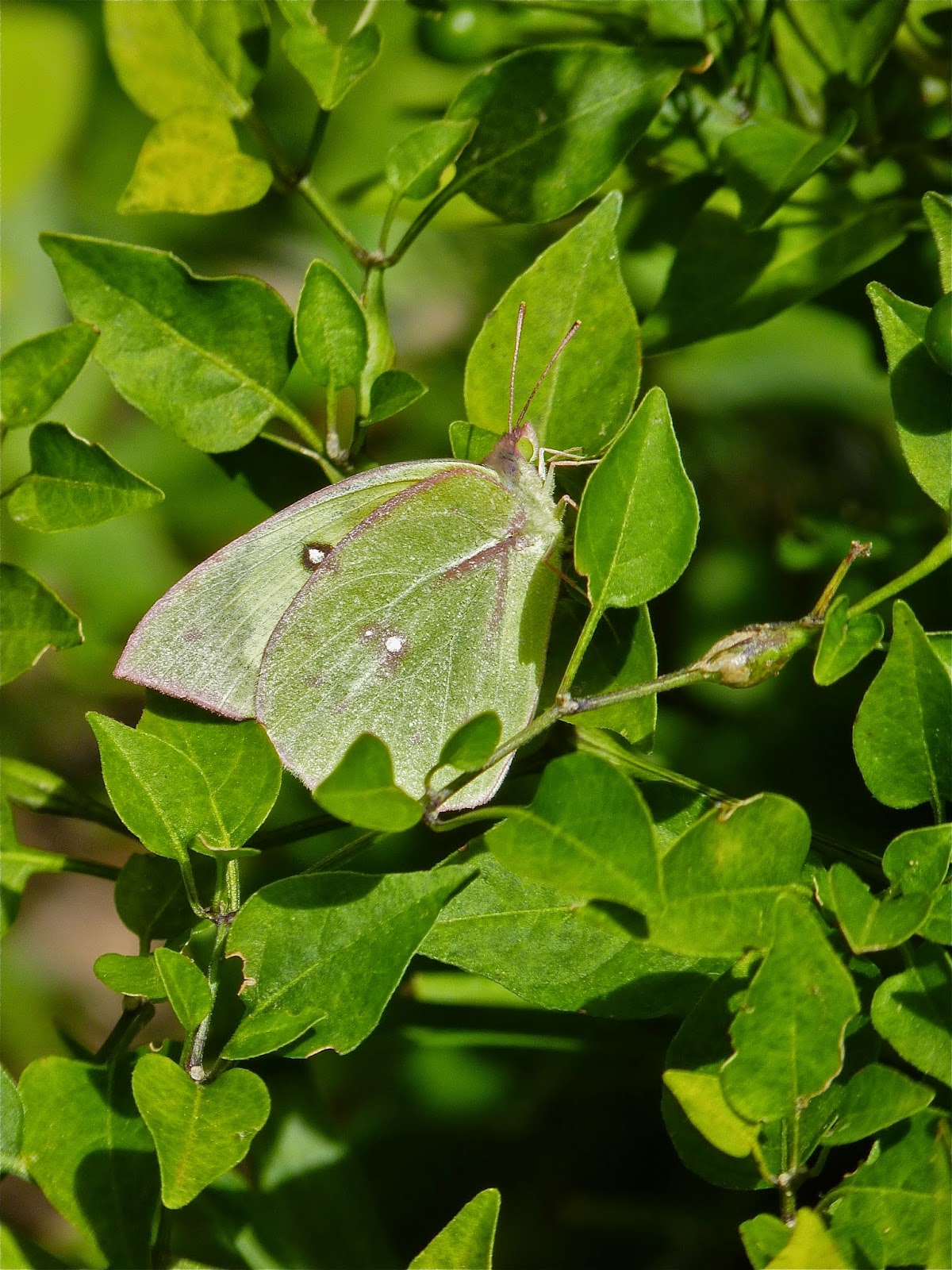 This Colias philodice, or Clouded Sulphur, was one busy lady. Nectaring at tropical milkweed was followed in short order by ovipositing in a thick stand of ruellia plants.  I'd had plans to dig that clump out, but when I looked closely and saw the multitude of butterfly eggs there, I decided to let it ride a while longer.  I don't fancy myself as a Destroyer of Nurseries. 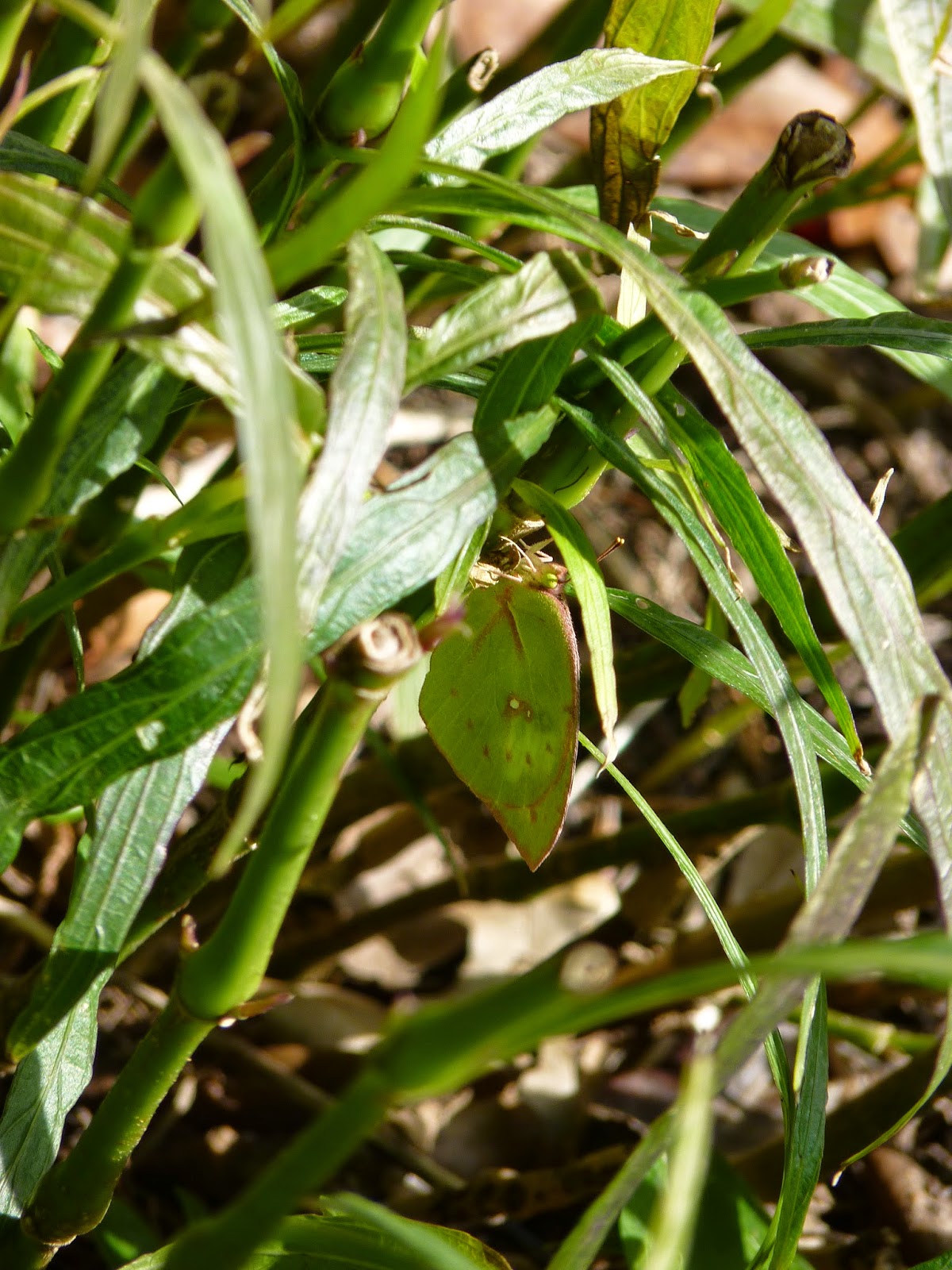 This butterfly is quite well camouflaged in a Central Texas garden on a windy day in November. 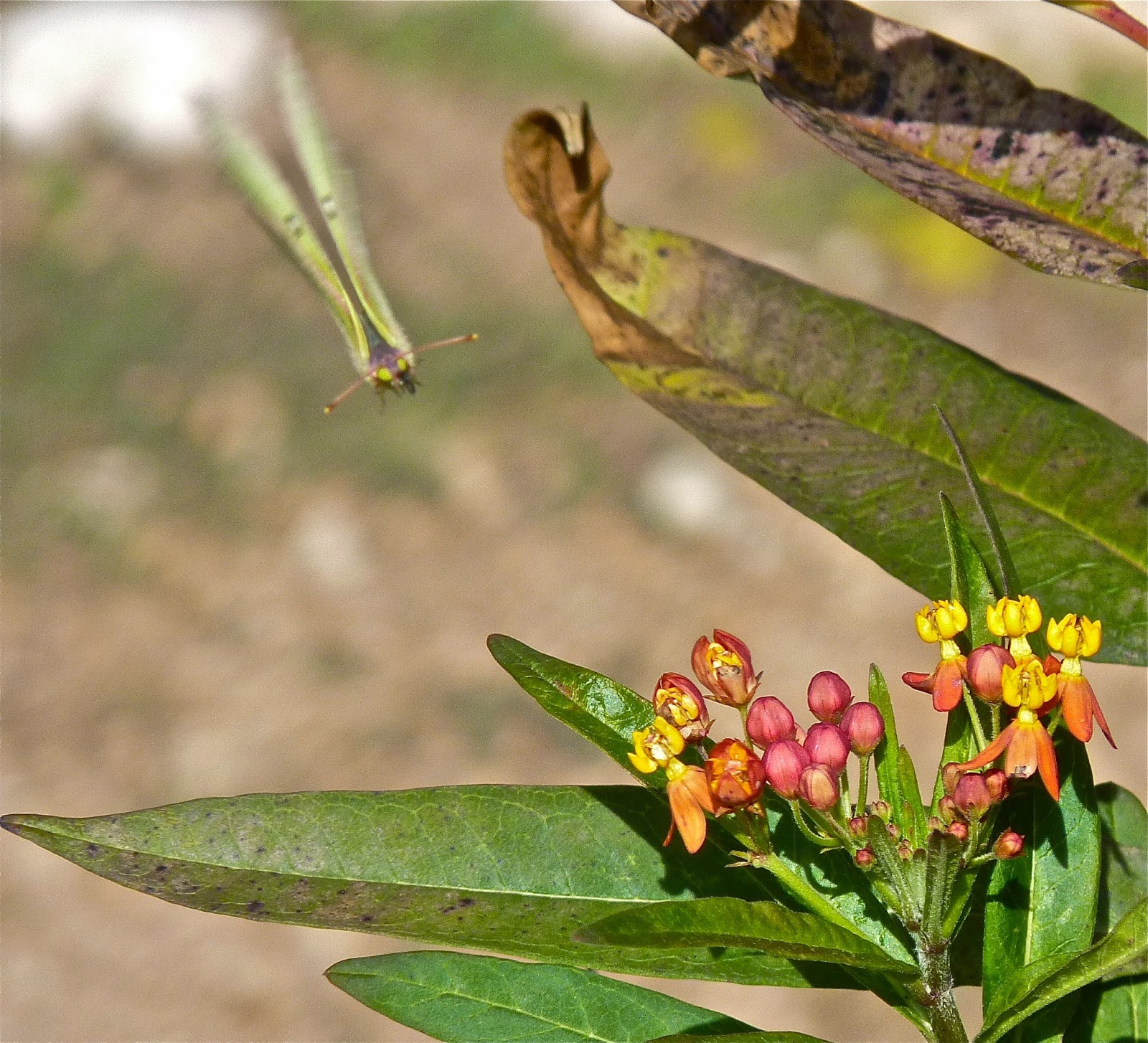 In flight she resembled nothing so much as the golden leaves falling towards the soil. 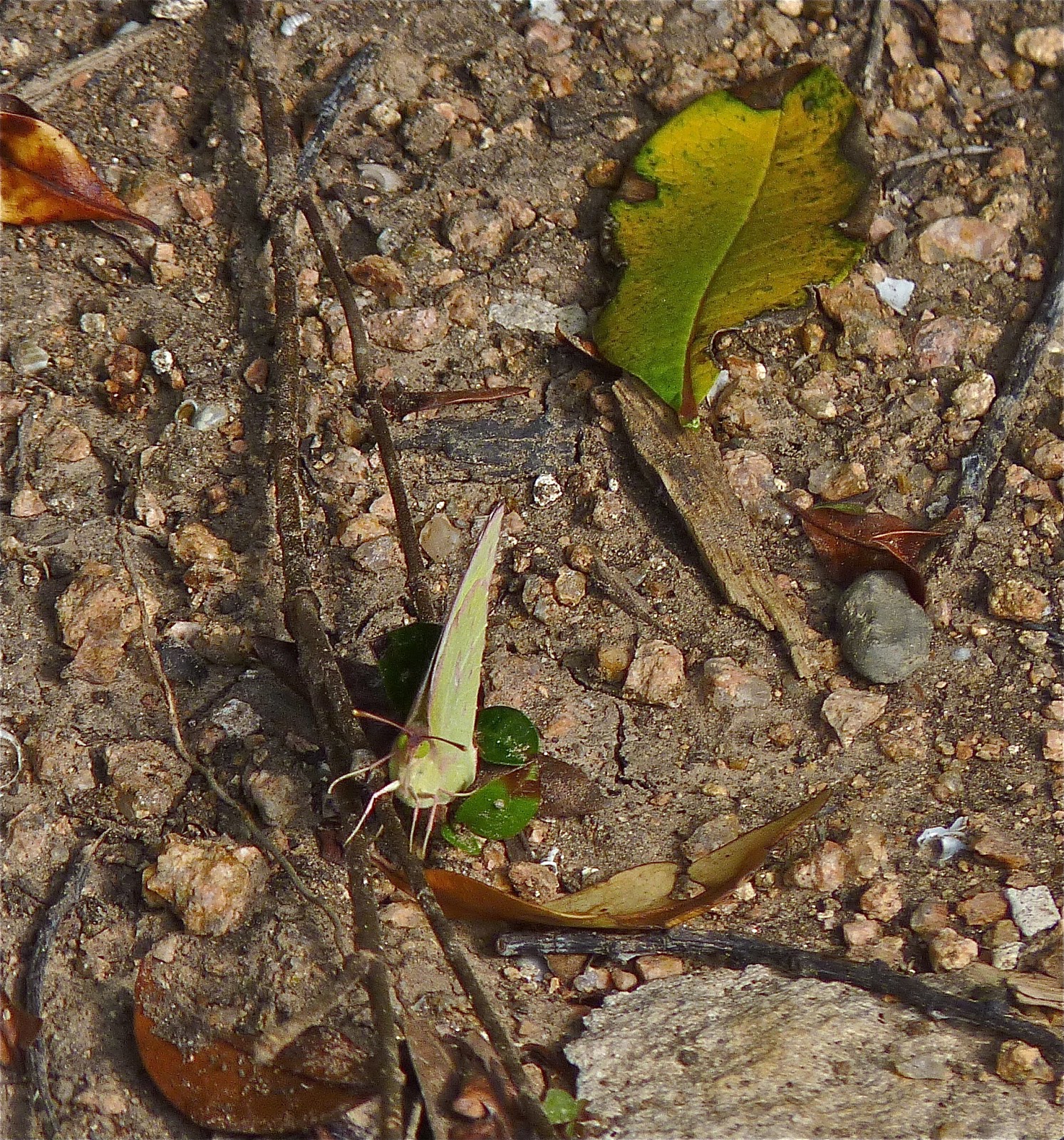 Wherever she landed, with her light green wings folded, she often vanished into whatever plants she'd chosen as temporary refuge.

Which was a very good thing, as I had another guest, a very energetic and curious puppy, on the day this butterfly appeared. The puppy found the butterfly's flight pattern an irresistible invitation to give chase. As a result I only grabbed a few shots and felt it wise to keep more than usual distance. But the fun we all had dancing around that windy warm afternoon! It is a memory I'll cherish long after winter's cold and gray have settled in for good.

Even the intermittent occurrence of freezing and near freezing temperatures means a change in the garden's recurring cast of characters. With native plants on hand, doing their work to provide shelter and forage, experience teaches me we'll still have plenty of visitors.  The locals, gardeners and wildlife alike, are well familiar with our now-it's-warm/now-it's-cold prologue to winter. Native plants that evolved in tandem with native and migratory wildlife throw out their own versions of a welcome mat and buffet table, all the year 'round. I just love the idea of being a gracious hostess, don't you?

If you haven't previously shared a WW post?  I respectfully suggest you think about joining us with a contribution this coming January.  Don't be shy, there's plenty of time between today and the first Wednesday of the coming year. I guarantee you'll have fun keeping a close eye out for critters as winter's cold throws most of the garden's work back to the garden itself, rather than the gardener.  You could make it your New Year's Resolution!

Happy Wildlife Wednesday to all, and thanks as always to Tina of My Gardener Says for hosting.
Posted by TexasDeb at 6:00 AM 17 comments: