I won't be taking any anytime soon apparently.

After a particularly graceless exodus off a high ladder perch yesterday, I landed awkwardly (read:heavily) on one foot and thoroughly cranked my ankle.

We are talking a sprain of epic proportions unfortunately which may see me stuck with one non-weight bearing leg for quite a while.

Today I am ensconced on my side of the bed, using the Hub's laptop, crutches tucked to one side, pillows lip gloss, water glass, OTC anti-inflammatories and book all crowding the bedside table.

Me being the imaginative type, I spent much of yesterday assessing the pain and swelling wondering anxiously if I'd "only" sprained my ankle or if I'd also broken bones and/or done tendon damage.  Today the pain is both better and worse, having settled into an area I am trying NOT to decide indicates something more than a sprain.

Oh - did you not know I am a free lance faux physician in my spare time?  Yeah - I went to the lifetime school of observational Mommy medicine and though I am short a degree OR admitting privileges at any health care facilities I can at least claim I have not killed anybody under my direct care.

Fear not - I am monitoring my situation extremely closely and at least know enough not to research online the consequences of my fall/injury as part of the process.  I'll want a nap later which won't be possible if I am fighting a full fledged anxiety attack hatched by the horrors so often unveiled by web searches for medical information.  I have loving family around to fetch and fuss over me and help me keep my decision tree reasonable as to when it might be time to head out for professional intervention.  You know, of the went-to-school and got their degree type physicians.

For now I am laying low (except for that one elevated leg) and I'll be back in a few days, hopefully with glowing reports documenting an astonishingly rapid recovery.

I'll leave you with this one thought for today...  Do not for one moment take for granted the ease with which you currently are able to push away from a table and chair, stand, and walk around your home/office/environs to do the thousands of things you do every day.  That mobility is an absolute gift, one you should (and at least I now do) cherish for as long as it is yours.

One Small Step for 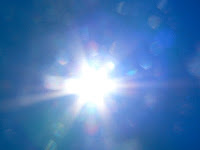 According to all the usual indices, it is full on summer time here.  School is out, the forecast keeps rotating between 95 and 75 for our predicted high and low temperatures, and on the interweb I see more and more recipes featured of the outdoors grilling and picnic treat variety.

Which is fine by me.  Foods that will tolerate being made ahead and transported to a gathering are among my favorites.  Including the upcoming beauties that we made not for a picnic, but to have as a special treat to celebrate the return of an HBO favorite to the lineup.

Vamps and shape shifters rejoice...taken from a recent copy of Martha Stewart Living I'd like to introduce you to the delights of....  Marshmallow Cookie Sandwiches. 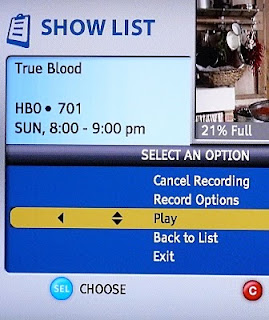 Based upon the original Tennessee Moon Pie (introduced in 1917), the recipe graciously allows either the use of home prepared or store bought graham crackers.

Y'all may recall I noted previously I have several bags of specialty flour already languishing in the freezer, so I opted to go for a box of honey grahams from the store.

Truth be told, even if you go the home made route you'll end up with squares rather than that evocative moon shape, but the eating is no less delicious for all the corners involved.

We started these fairly early in the afternoon noting the marshmallows require at least three hours to set.  It was fun working with the block of set marshmallow.  We took to heart the hint to use powdered sugar on our knife to help get a clean cut and once we got used to the plasticity of the mass, it was a kick cutting the squares and then powdering the edges to make them easier to handle.  Cutting them was almost as much fun as eating them... 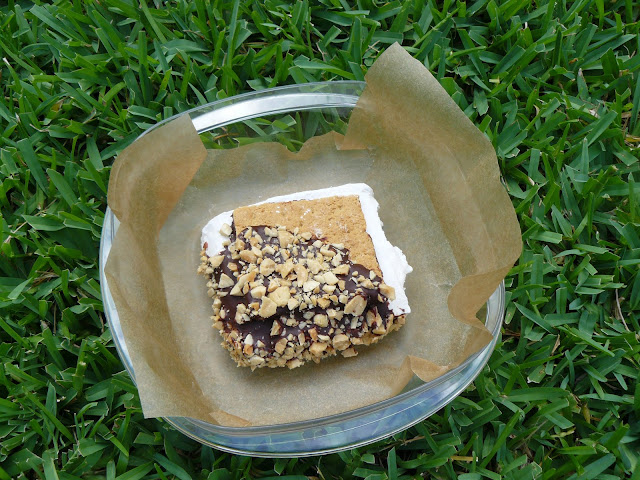 So without further ado, the recipe for Not-So-Moon-Shaped-Pies.  The only change I would suggest, especially if you go the route of store bought grahams?  As rich as these flavor combinations are I think a pair of single crackers providing a smaller rectangle would make a more reasonable serving size.  That way you'd end up with 18 one by two inch rectangular treats, rather than 9 two inch square behemoths.  Either way, you'll be drawling and drooling up a storm.

Here is the recipe: 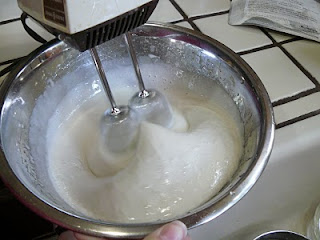 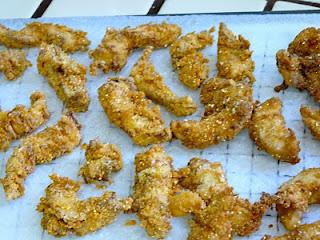 I was enjoying what passes for "our version" of fried chicken for dinner while watching a recorded episode of Iron Chef America recently.

After the episode's secret ingredient was revealed (cauliflower) challenger John Fraser announced his decision to forgo the assistance of sous chefs, prompting Iron Chef Michael Symon to do the same.

During the course of the hour the two chefs were allotted to cook, it was stated over and over (and over) how especially difficult this battle would be for them, working as they were to prepare the five dishes required to present to the judges all ALONE.

Finally I could stand it no longer and said aloud "This is something most Moms do every night for dinner and nobody makes a big deal about it".

I heard in response the somewhat expected objections - this was a different level of cooking than expected for home dinner, it was a contest, there were judges to please, etc.. 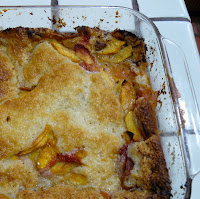 I'll yield the points to some extent, I do accept there are differences, but I stick with my original assertion.

Every night, in homes around the world, people sit down to eat a meal that was prepared for them by somebody who probably spent around an hour to make various dishes that they will most certainly be judged for.

Maybe a little longer than an hour if dessert is included.  This peach cobbler is a favorite of ours but it takes an hour in the oven so I like to bake it ahead of time.

Meal to meal, these home cooks will probably also hear all sorts of opinions expressed about what they've cooked.  [If not out loud, then the plates going back to the kitchen, with or without food left on them will pretty much say it all.]

The biggest difference I can see between home cooks and the occupants of Kitchen Stadium is that the home cooks probably also shopped (and paid) for all the ingredients and they will be the ones expected to clean up any messes made (well, eventually).

There are no lifetime bragging rights or special recognition that goes with the success of any of a home cook's efforts AND in around 24 hours no matter how good a job they did before, they will be expected to do it all over again.

I'd like to see the Iron Chefs tackle that challenge.