We talk a lot about the weather here in Texas.  A LOT.  On the face of it, the weather is at least a topic less contentious or divisive than politics or religion. Additionally, as subject matter it is a bottomless well of content, for as the old saying goes "If you don't like the weather in Texas, wait five minutes and it will change.".

And at no time is that more apparent in Texas than in October.  One day will be hot and dry, the next day cool and cloudy, periods of drought are often followed by torrential rains and all within the span of one brief month.

Thought of as the beginning of a "second Spring" in gardening circles, October is a turning point, a pivot between endless heat and the cooling to come. October provides easier growing conditions and last minute growth spurts along with pleasant working conditions for gardening chores.  For wildlife, October is a time to eat, to reproduce, a time to migrate, or just to hunker down.

The visitors here in the hills just west and south of Austin last month were mostly of the winged variety, though a few walked in.  Daily in October, unless it is pouring rain, wrens fuss-fuss-fuss, cardinals tick, jays shriek, and mockingbirds guard "their" berry sources.  Everything seems to enjoy the final loosing of Summertime's hot dry grasp.

Berry eating locals were well represented by Northern Mockingbirds. Here one is shown making an afternoon feast off of Rivina humilis, or Pidgeonberry plant. 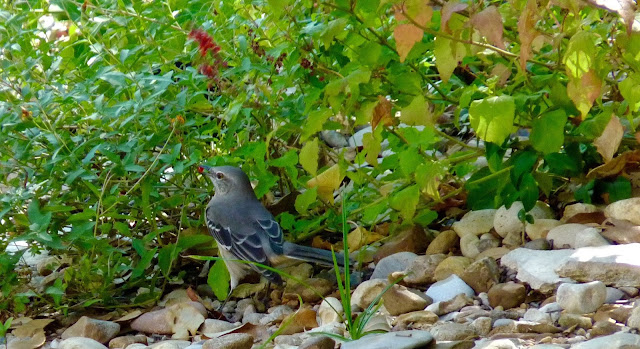 This bird was hopping up off the ground repeatedly in a neat maneuver designed to snatch a single berry at a time off the top branches of this low growing plant.  Try as I might I was not able to catch the bird in mid-hop.  (I may or may not have taken and discarded upwards of 40 shots, ahem!).

Other winged creatures were appreciated as they flittered, fluttered and fed. A rare sight here, this black and yellow lichen moth (Lycomorpha pholus), was nectaring on mint. And yes, black and yellow does seem to be a misnomer, but in the face of such an attractive creature, why waste time quibbling? 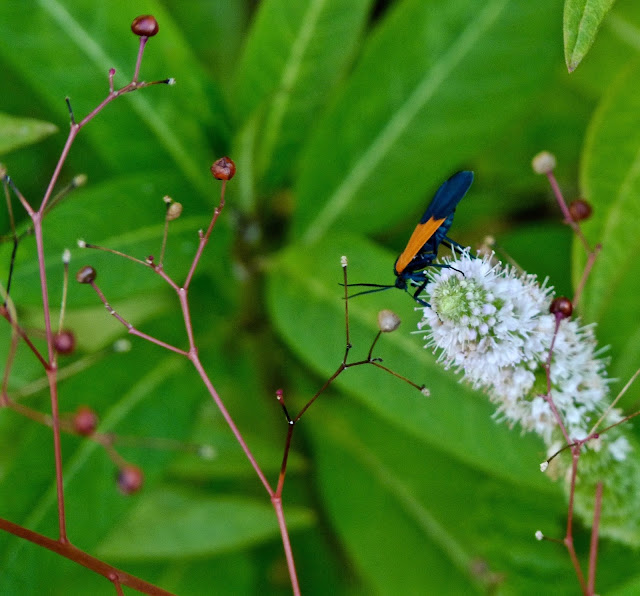 That protective coloration had me thinking this was some other more pestilent variety of visitor at the start.  After a careful capture and subsequent identification effort, I was relieved I didn't try to eliminate this slow growing and thematically appropriate October drop in.

More common visitors appeared to keep us company while outdoor October chores were tackled.  Skipper butterflies were most numerous, as has become usual for our spaces.  In October we saw (and as with all Skipper identifications - these are only best guesses!) various Duskywing Skippers... 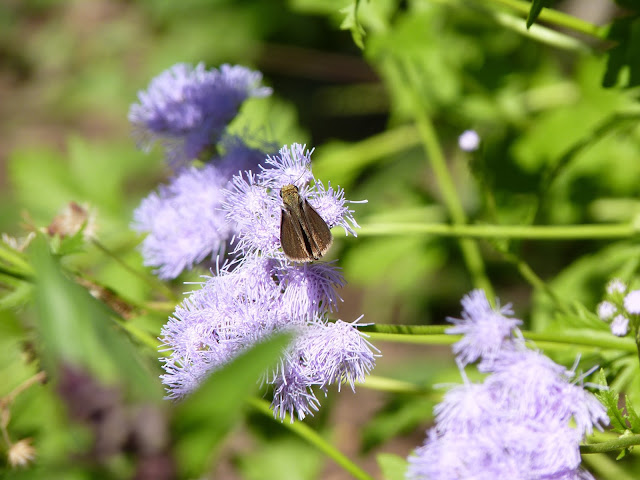 and a host of Fiery Skippers as well. 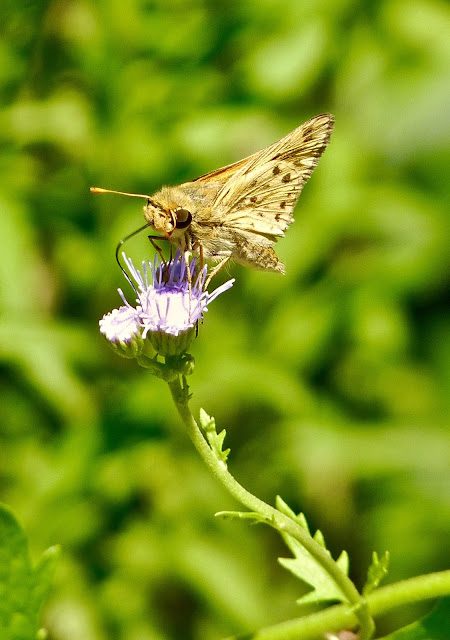 We were at long last graced by royalty, with one documented visit by a Queen Butterfly, (Danaus gilippus) and even one single Monarch, though I was not able to get a reasonable photo of that migratory wonder. 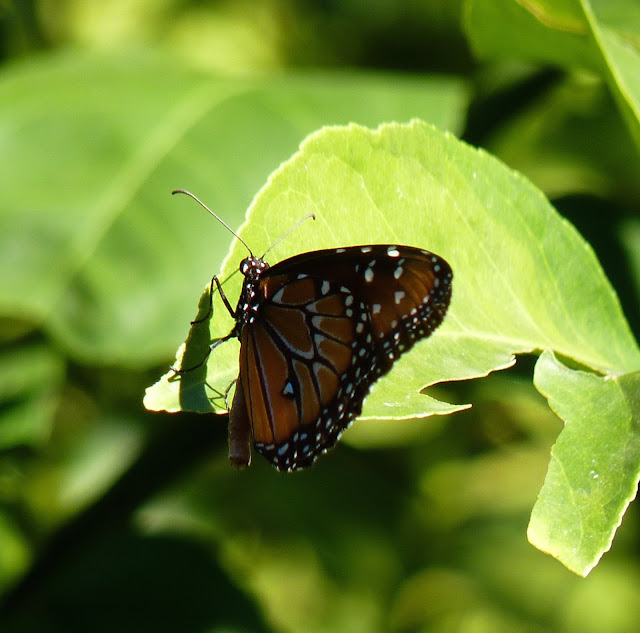 No less lovely for their small size or protective coloration, the presence of many adult lacewings is the logical result of various aphid infestations.  Aphids having provided a steady food source for their larvae earlier this year, it was rare to prune or move aside a branch in October without dislodging one or more of these lacey beauties. 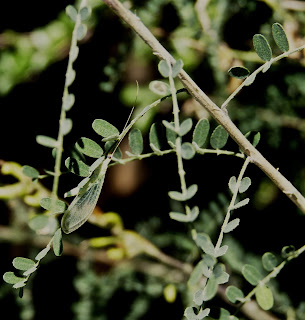 Not quite so tiny but just as beneficial, paper wasps, Polistes exclamans, continued their ongoing hunt for caterpillars of all sorts to feed their young at the nest. 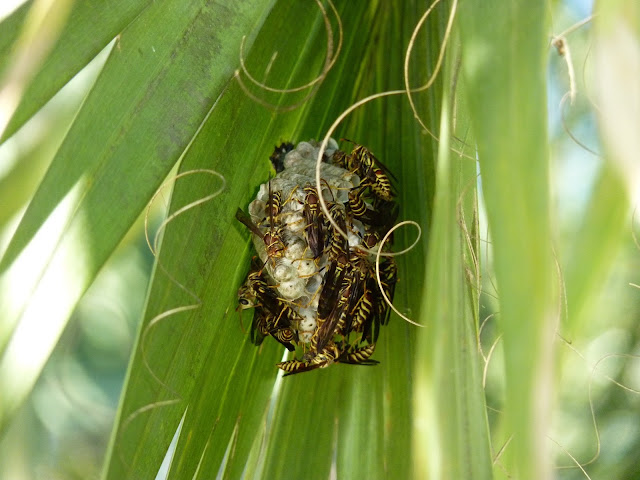 Shhhh - naptime in the nursery....

Gangly and apparently caught between coloration decisions, this Walking Stick (Phasmatodea) displayed the typical head bobbing designed to help it visually scan its surroundings for threats or snacks. 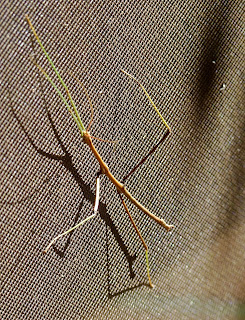 Finding neither on our deck door screen, this insect entertained our two indoor cats for the span of a half hour or so then abruptly disappeared.

The most fascinating saga for October had to be the appearance of two Manduca Sexta or tobacco hornworm caterpillars, feeding on a large Datura plant right off the front porch.

Tobacco hornworms are differentiated from the visually similar tomato hornworm by their seven white stripes, linear (like cigarettes).  The tomato hornworms have eight V shaped markings (think "V" for vine-ripened).  These caterpillars are able to successfully consume various toxins that they mostly excrete in droppings.

That said, it was hard to imagine they could consume such a toxic plant without experiencing any of the hallucinogenic effects.   Especially this one that took on the task of chowing down on a seed pod.

These caterpillars are able to sequester and release certain amounts of the toxins they consume via respiration, a form of "toxic halitosis" that is thought to deter spider attack.  They reportedly also click their mouthparts when attacked.

I'll take those reports on good faith.  Any caterpillar able to consume two long branches' worth of Datura leaves and the occasional seedpod is best left to conduct its own business undisturbed.

And that about wraps up this month's catalogue of visitors here at austinagrodolce.  Perhaps not an exhaustive list, but certainly representative of the majority of the usual suspects.

Our use of native plants in combination with attempts to avoid chemicals and allow a natural balance between predators and prey to evolve here have rewarded us with both an ever increasing variety and number of wild visitors to enjoy.  They are all quite pleasant company to keep as we work to ready the garden for whatever-comes-next.  We garden for them, they work in the garden with us, it is all pretty much sweetness and light in this most pleasant of times.

Thanks as always to Tina of My Gardener Says for hosting the Wildlife Wednesday meme each month.  Do take time to check out her always informative and entertaining chronicle of gardening with natives.   While there, be sure to link to your own Wildlife Wednesday post in the comments section of her November Wildlife Wednesday offering to share with wildlife lovers world wide.  We'll all be glad you did!