I'm not weighing in with any particular viewpoint or lessons learned today, other than thinking it advisable to start keeping better track of what is blooming, and when.  So, without further ado...what is blooming in this middle of the month of June, 2015:

I may have missed one or two but that's the vast majority of the floral action at the moment.  I was surprised to note how there are flowers in every color at play - I always have the impression my garden beds are predominately purple or yellow, when the truth is I have lots of white, a bit of pink, orange, and even a a few plants with red flowers.  So what's my color story here?  "Rainbow" will have to be my answer.  A little bit of every color, and every one appreciated in turn.

Thanks for indulging my wish to take stock and tolerating the flower "show".  I hope to be back soon with a little more content to accompany the photographs.  In the meantime, we had over an inch of rain already in June with more promised as a tropical storm heads our way.  There is nothing typical about the weather this year and I hope to take full advantage, rearranging and adding plants well past the usual "stop work" dates for central Texas.  Could there be some "before and after" fun lurking just over the horizon?   There could, there certainly could...
Posted by TexasDeb at 8:15 AM 26 comments:

After the big wetting down our area experienced last month I'll venture everyone in Central Texas, gardener or not, has begun keeping a closer eye on the weather long range, and the skies, short term.

We've all turned to various sources for updates and information in attempts to understand what happened and why.  All except for the wildlife, that is.  Long lived denizens or one season wonders, the various populations of wild creatures in our area are all coping as best they can with fluctuating local conditions, one day at a time.

Native bee populations have been significantly shifted due to the ongoing presence of standing water where usually there is nothing but dry ground. Carpenter bee numbers seem relatively unaffected, and I've seen many of them out and about whenever the sun shines.

This one, a male judging by the large size of the eyes, is probably Xylocopa virginica.  It seemed to be satisfied to simply hang in mid air, without working nearby flowers.  Perhaps it was eyeballing fence posts for potential new habitat, or was simply stretching its wings after having spent days cooped up in brood galleries while heavy rains fell.  I empathize.

After recent rains I could not wait to get back outside, but once I did I was not always happy with the welcome I received.  Mosquitoes in particular seemed happy - SO happy! - to find me.  I was surprised to read that there are several different species of "flood mosquitoes" (Psorophora, Ochlerotatus, and Aedes genera) who lay eggs well above normal water lines.  The eggs wait in dormancy up to several months until waters rise and trigger immediate hatching.

These mosquitoes emerge swarming and hungry, but are not typically the carriers of any serious illness.  A second wave of flood mosquitoes can be expected 10-14 days after the initial rise of waters, so we have that to look forward to.  I'll warrant there is currently not a single flood mosquito egg left high or dry in all of central Texas.

Though it is significantly annoying to be relentlessly attacked by biting insects with each foray outside, this "bloom" of bugs serves as a boon to all the many insect eating creatures, who are all working with rain scrubbed habitat and the potential depletion of many of their other ground dwelling meal tickets. Mosquitoes as a silver lining to recent clouds?  It all depends on what you like for dinner.  Or who...

Recently my eye was caught by a flash of white in a patch of Virginia creeper (Pathenocissus quinquefolia). 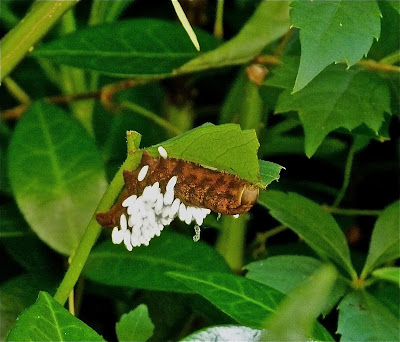 What I believe to be an Achemon sphinx (Eumorpha achemon) caterpillar is carrying the spun silk cocoons of developing larvae of a parasitic wasp, Cotesia congregata.

While I was vaguely aware that some wasps utilize caterpillars as hosts for their developing larvae, I had the idea the caterpillars were paralyzed as part of the process.  That meant I was especially startled when this caterpillar began to move slightly after I relocated it into a sunnier spot for close-up examination. 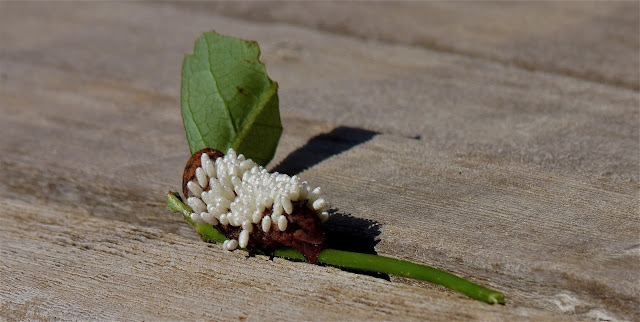 Achemon cats are one of several "hornworm" caterpillars, and are known for a defensive whipping back and forth motion, used to startle predators into dropping them to the ground.  This caterpillar was exhibiting a very faint version of that defensive mechanism but if I'd have been holding it up, I'm pretty sure I would have dropped it in a big hurry.  Realizing the caterpillar was not only alive but responsive, and seeing that the creeper stalk it attached to had been chomped on fairly recently, I knew I had some information gaps to fill.

What I found out was equally disturbing and fascinating.  Cotesia congregata wasps inject their future nurseries with genetic material that seems to both slow the host's metabolism, allowing it to eat (and eat) without moving forward in the metamorphic process, and to simultaneously provide interior hosting space for the wasp's eggs without triggering an immune response.

After a period of time the wasp eggs hatch and the larvae exit the caterpillar, attach, and spin themselves a silk cocoon for pupation. Eventually the adult wasps emerge from the end of their silk cylinders and fly off to begin the cycle anew. 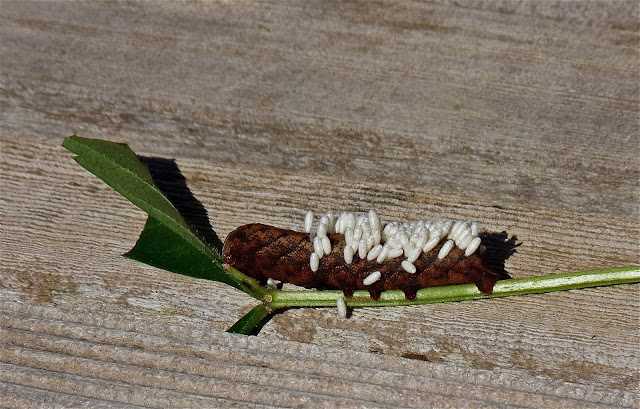 As hornworms can cause major damage to vulnerable cultivated crops, these wasp hitchhikers are considered beneficial insects, one of nature's many checks and balance systems.  I'm not growing tomatoes this year and though we have wild grapes they all fruit high in surrounding treetops, so these hornworms have been welcome to feast undisturbed, except for this one.  After taking a closer look I carefully relocated the caterpillar back into the creeper undergrowth, where the wasp cycle will complete without further interruption by curious humans. 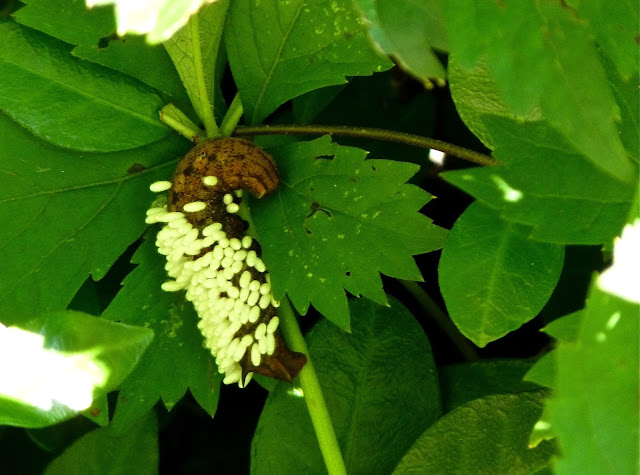 Nearby a backlit small garden spider, (Argiope aurantia) had established its web for the day.  Notable for the stabilimentum, or stabilizing denser zig-zag silk center, these spiders reweave that portion of their web each day, after having consumed the silk, potentially to recycle the chemical components. 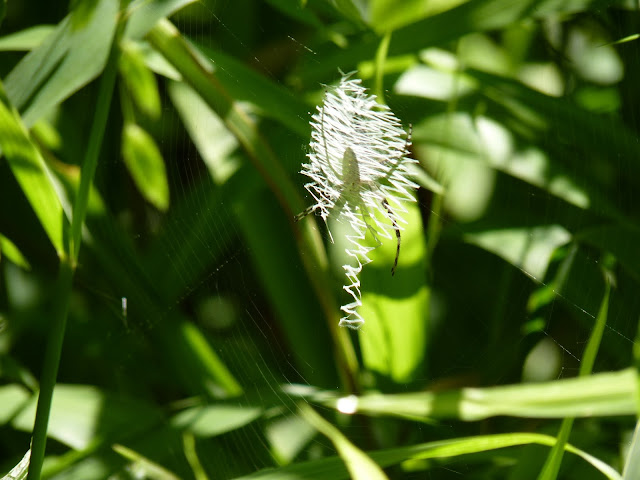 If she has chosen well, this spider will continue to use this location for the entire season.  I'm looking forward to having this lovely spider as company in the garden, weaving her daily web centers in amongst the inland sea oats (Chasmanthium latifolium). 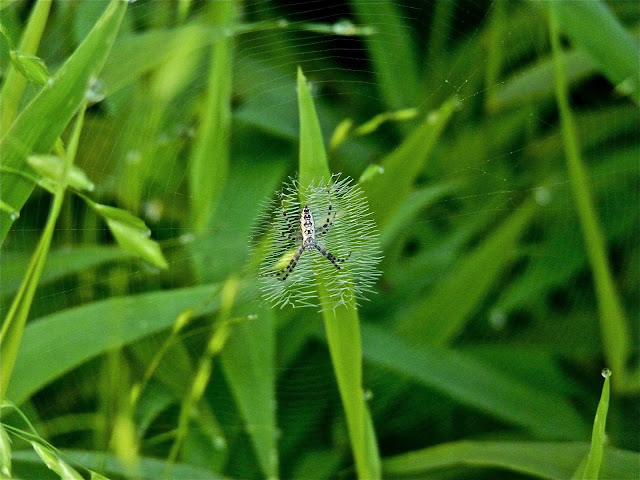 Not so beneficial, Aztec spur-throated grasshopper babies (Aidemona azteca) are numerous and causing damage to leaves and blossoms all around the gardens again this year.  While I've managed to capture and dispatch a couple of the dowdier brown adults, these brightly colored early instars often perch like tiny insouciant jewels, glittering in amongst the holey damage created by their incessant eating. 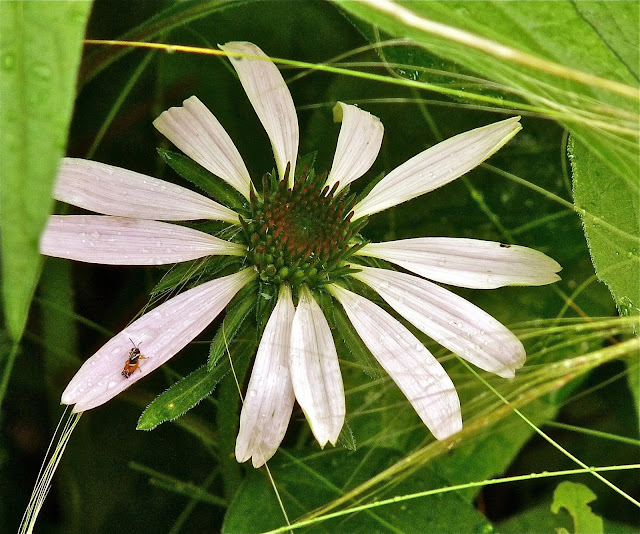 Also appearing in larger numbers than ever before, snails of every size and shape have been taking full advantage of a temporarily wet and therefore more easily traveled world. 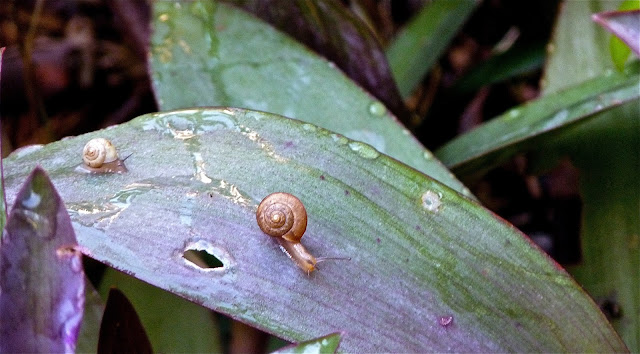 It has been impossible to walk around the paths without accidentally crushing some with every other step, the telltale crunch giving them away even when their size is too small to easily detect.

Well hidden by placement and coloration rather than size, this fritillary chrysalis continues to develop, whatever the weather.  Watching this one develop during the course of some of our rainiest hours, I am encouraged that native populations have developed good coping mechanisms for all the worst the Texas weather has to offer. 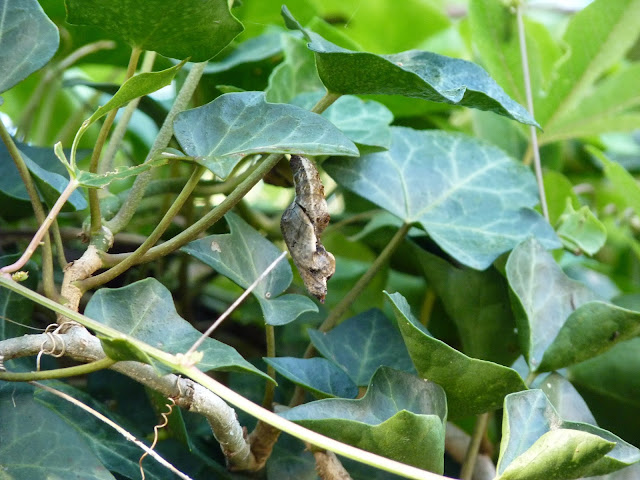 And here is a mystery yet to be revealed, or perhaps unraveled...  This tiny ball of what appears to be an insect silk of some sort, might harbor spider eggs, or it might be silk cast off and set aside for some other purpose.  After admiring it I resisted the impulse to open it for inspection, choosing rather to try and check it daily to see what develops.  Anybody seen one of these before? 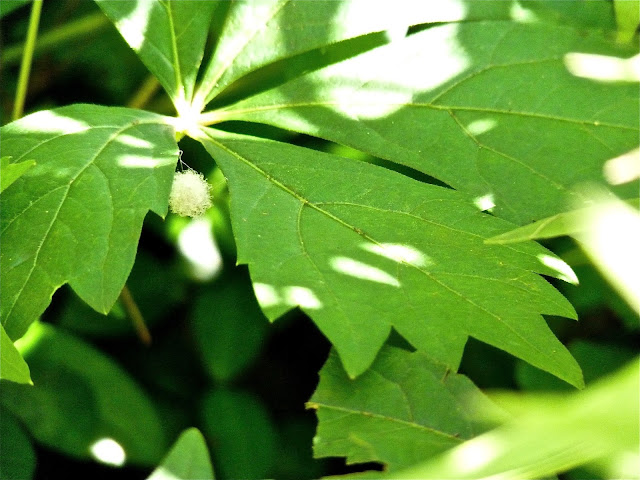 We've had the usual assortment of avian visitors, many of them overheard more than seen.  Wrens, mockingbirds, blue jays, cardinals, woodpeckers, tufted titmice, golden finches and chickadees, all are out and about, enjoying a return to more normal circumstances.  Including this non-feathery familiar... 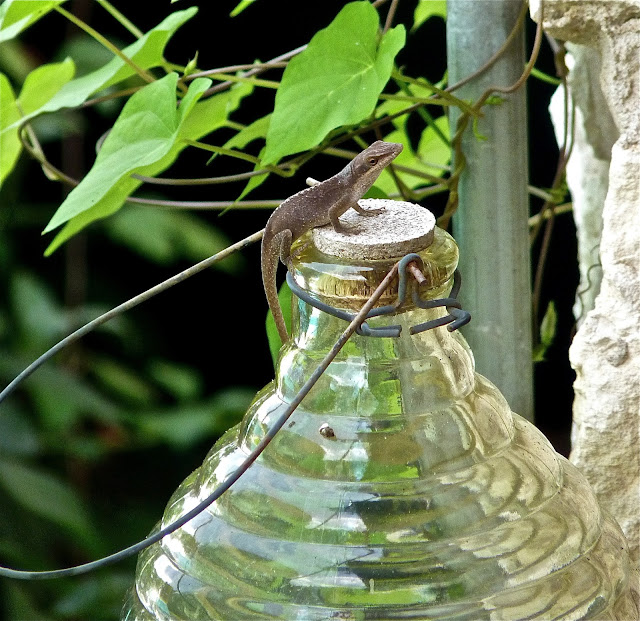 who joins me in wishing you a most pleasant June!

Thanks to Tina, of My Gardener Says for hosting Wildlife Wednesday, the first Wednesday of each month.  Please visit her site to read her post and other contributors as linked to in the comments section. In fact, we'd love for you to join in all the fun.  Please consider sharing a post of your own, as we observe and salute the myriad wild creatures who so generously share their spaces with us.  Rain, or shine.
Posted by TexasDeb at 10:17 AM 24 comments: