Aspiring to the Habitual

I went out into the garden this morning.  Not to weed, not to water, not to deadhead.  Not to assess what needs to be transplanted or pruned, not to look for pests. 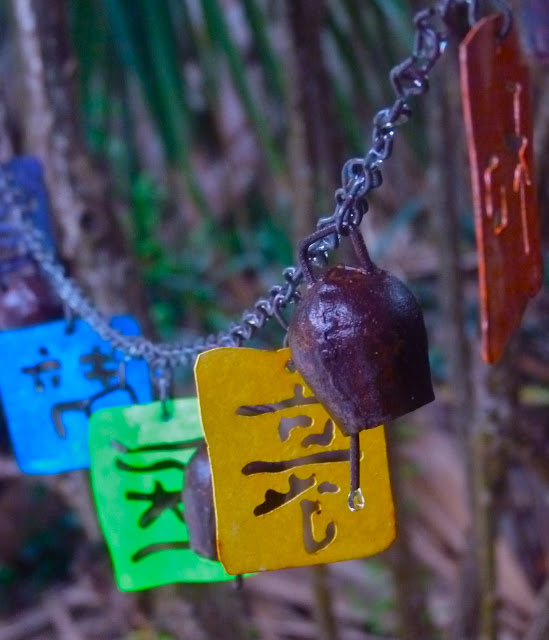 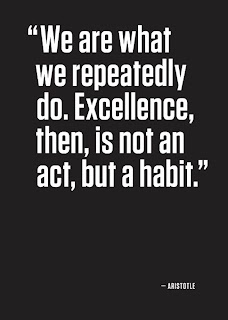 Recently the forecast for our area advised that conditions were ripe for violent thunderstorms, including the usual bad weather hat trick, damaging winds, dangerous hail and possibly, tornadoes.

Here in Central Texas we are used to our neighbors to the North getting pounded by bad weather.  More typically our area's major concerns surround rain - either way too much or way too little.  This forecast implied we might be in for a taste of what it means to live in the tip end of Tornado Alley for real.  That got my attention.

All of this followed a day when I'd read a short article speculating why there were so few violent storm systems being generated in tornado alley for this year. It was only a few days later that the season kicked into gear, with tornadic activity in Granbury, Texas shortly followed by the massive twister that flattened much of Moore, Oklahoma.

I decided to take the warnings seriously and went out into our planting beds with an eye towards relocating items that might be damaged by large hail, and/or putting away items that could, in high wind situations, become damaging projectile missiles. 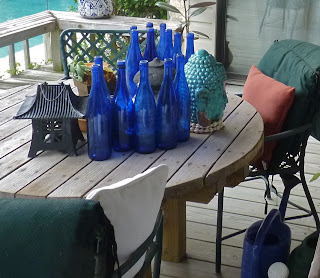 The bottle tree was my first concern and as I denuded it of empties I realized several pieces were in jeopardy of being broken or launched. 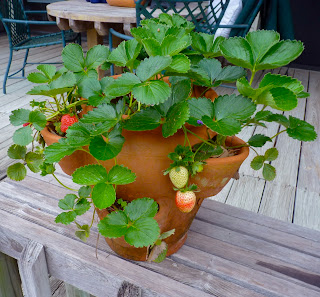 A strawberry planter needed to come in under cover, and all our lightweight plastic watering jugs usually stored atop the rain barrels needed to be safely corralled.

As I walked around I realized with a sinking sensation everything was at risk.  Three Meyer lemon trees were heavy with fruit. 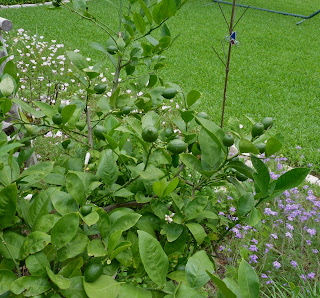 A tomato plant which has so far not produced any fruit was yet still blooming and MIGHT make tomatoes if I could remember to water and feed it sufficiently. 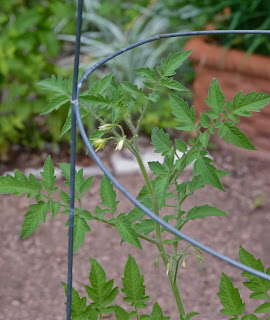 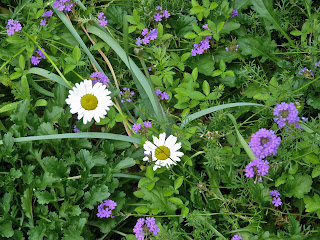 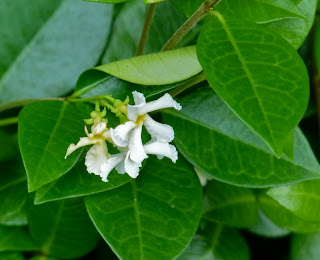 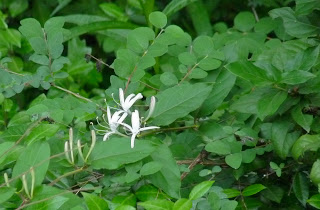 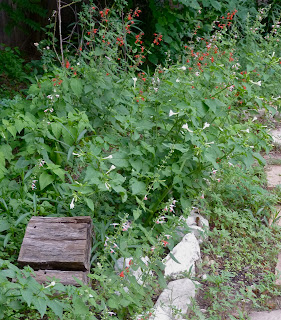 There were flowers everywhere and I wondered where the small feral cat we've been feeding would shelter if the projected severe weather developed in our area. 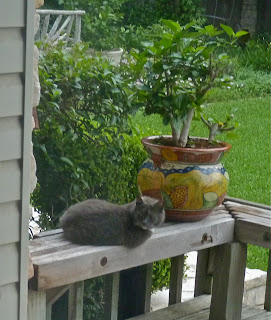 Most of the time I eye our garden spaces with the view of work yet to be done.  I scan quickly across blooms or fruit to focus on pests or weeds or watering.

On this particular morning I decided it was time to slow down and take a closer look at all the beauty and bounty and rightness that was essentially sheltering in place right under my nose. 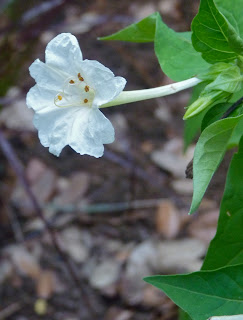 As it turned out we did not get high winds, large hail, or a single drop of rain.  The storms all went well to the north of us, as is usual.  I'm working to hold on to my gratitude and the feeling of being surrounded by precious and fragile life in all its beauty. Weeds and pests and undone chores inclusive. 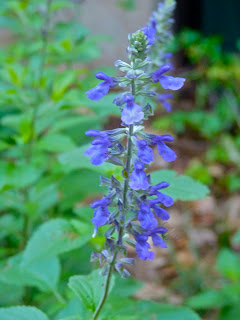 We went through the process of qualifying as a certified wildlife habitat a few years ago.  We did so as part of our move away from supporting a large standardized suburban lawn.  The process served mostly as a sort of checklist for us that we were doing everything to promote diversity we could.  There are no rewards of obtaining certification other than the knowledge you've done a little something to help out your wild(er) neighbors along with the potential privilege of observing a wider variety of fauna up close.

Over the years we've been delighted and fascinated by most of our unexpected suburban visitors, especially after we transitioned from having two dogs running loose out in the back. Since then, with only indoor cats in the official menagerie, we've left certain areas of our lot alone, created and maintained specific habitat supports, and happily observed as the numbers and varieties of visitors increased.

Some nocturnal regulars are observed indirectly by the tell-tale signs they leave behind, such as the dirty mess when local raccoons raiding our compost heap and bird feeders wash up their spoils on the top pool stair.

Armadillos as well, have left behind any number of grub hunting holes, though we'd rarely see them lumbering about.

This morning however, the Hub and a litter of four young armadillos were mutually surprised as he was working on the pool and they were emerging from a burrowed hole that is beneath the rock work around their "pond". 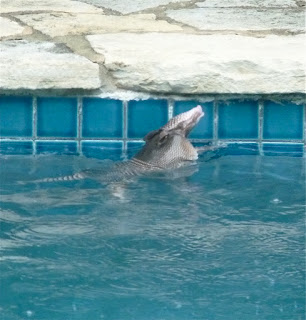 As he yelled his surprise, the four young armadillos immediately jumped into the water and then began swimming around in what looked to our untrained eyes as somewhat frantic fashion.

To our relief and despite our attempts to herd them in any particular direction, one by one they all found stairs at either end of the pool and clambered out.  All while the Hub and I expressed anxious mutual dread at the idea they might tire and drown. 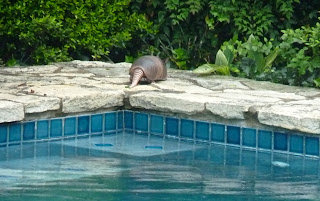 It turns out our state small mammals are excellent swimmers.  Armadillos can inflate their intestines in order to stay afloat and potentially swim long distances (otherwise their heavy carapace weighs them down).  They are also capable of holding their breath for up to six minutes, which reportedly allows them to sink and walk across creek and river beds.

Nobody, human or otherwise, was harmed by the swimming pool surprise this morning  (if you don't count the adrenaline surge the Hub experienced).   We're not thrilled to have what is apparently an active burrow so close to the pool, but the shy creatures are more typically out and about at night so there is no immediately obvious reason to try and relocate them.

That's a most interesting lesson I keep learning from our wilder neighbors.  No matter how we arrange our beds and paths and features, they have their own requirements and their own ideas about where is ideal to set up shop.

I remind myself these are historically their spaces - they were all around long before our houses intruded, and will remain around long after we've moved on.

I may just have this who is providing habitat for whom thing backwards.
Posted by TexasDeb at 11:25 AM 5 comments:

I doubt you could be unaware. Everywhere there are constant reminders to do this, plan that, buy this, that or the other, all to celebrate the love expressed between mother and child. 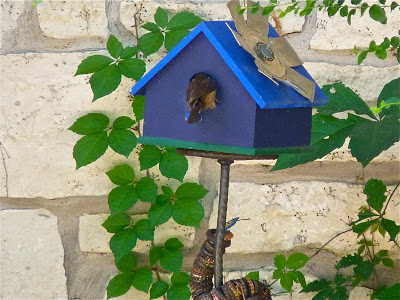 This year I am thinking especially of a couple of women I know who are freshly suffering the recent loss of their own dear Mommas.  I am hoping they will feel not only the inevitable pain and loss that the death of a mother brings, but also joy and gratitude for the love they did share. 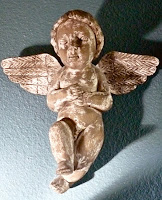 Whatever their relationships with their mother, they were shaped in so many ways, and continue to be who they are directly as a result of who their mother was and how she loved them. 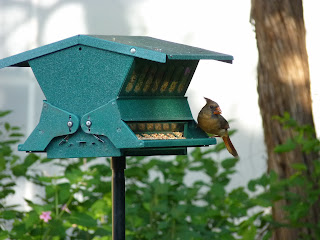 I believe with every ounce of my being a mother never really dies.  Her children and then their children will go on to echo her life as long as the sun rises and the birds build new nests in the Spring. 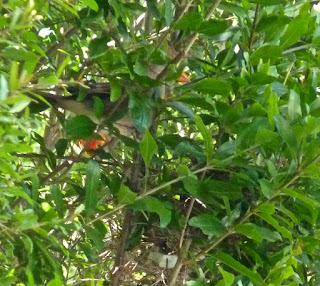 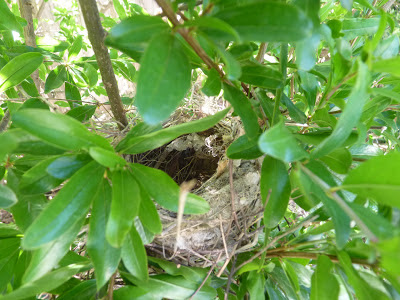 However you celebrate, whoever you remember, Happy Mother's Day. 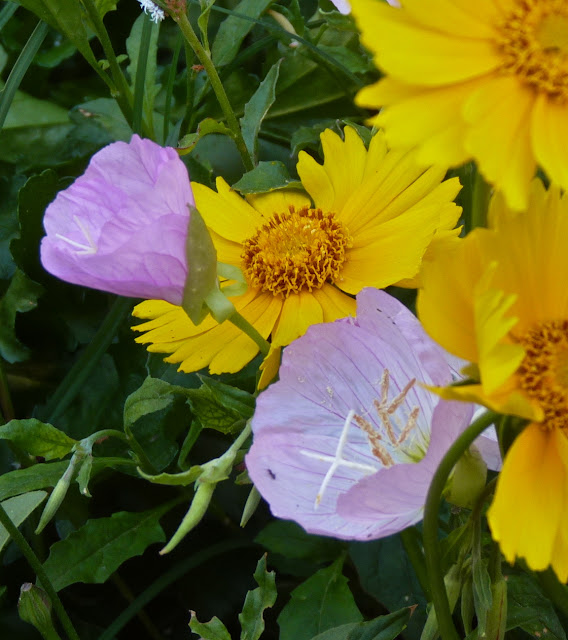 Day before yesterday I was enjoying another varied and fun post from Philip of East Side Patch, wherein he was describing, among other adventures, seeing and snapping a close up shot of a baby jay that had apparently flown the coop.  Or nest, rather.

He reported the jay was relatively unconcerned with his attention though it did have its limits.  After posing for a couple of patented ESP blog close ups, the baby jay made its way over to safer, or at least less populated with paparazzi territory.

Yesterday, I was out to sweep off our front porch, partaking in that annual frustration fest otherwise known as trying to keep ahead of the oak tree pollen piles, when I noted, underneath a small table to the side of our door, a concentrated pile of another sort.  Hmmm.  It looked like.... bird poop?

I leaned over to get a closer look (yup, that's me in a nutshell folks, there is what looks like poop on the porch and I LEAN IN to get a closer look out of curiosity).  In so doing I startled yet another baby jay, this one not quite ready for prime time flying.  It gave out an unearthly squawk of terrific volume and starting hop-skip-jumping down towards the driveway. 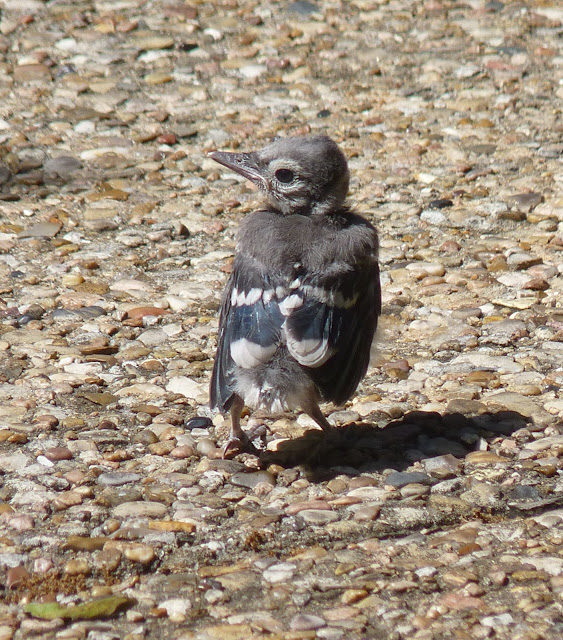 I managed to get this one shot from afar, not wanting to distress the young bird any more than being grounded while its Momma was in the tree yelling (support? accusations? directions?).

Later on while my daughter and I were out appreciating the weather and the blooms out front, we overheard a conversation between a father and his young daughter, walking over to the neighborhood park.  He was clearly fielding questions about baby birds that had fallen out of their nests.  She was remarking, "when I fall out of MY bed the first thing I want to do is get right back in!".

This has me wondering.  Do Blue Jay nests come with built-in ejector seats?