It is hot and it is going to stay hot until at least mid to late October.

Cooking becomes such a chore under these circumstances and yet, despite the heat, folks still keep getting hungry and demanding to be fed. This puts a morale whammy on the cook designate because motivation is difficult when every move you make seems to be sapping the little bit of energy you might have left at the end of yet another long hot day.

Right about now is when a few new recipes that yield surprisingly good results with delightfully little effort can really pay off. I was lucky enough to find two such recipes recently and naturally wanted to share them both with you.

First up to bat we have Elise at Simply Recipes offering us a wonderfully simple preparation for breaded and baked chicken.

We eat a lot of chicken so I am always on the lookout for another good recipe. Dinner here can feature chicken as the main protein up to three times a week. The only way I get away with that is to make certain I have significantly different presentations in the lineup so it doesn't get too boring.

The original recipe features chicken drumsticks, but since I am the only one around here who typically eats the drumstick, I decided to swap out for chicken thighs. I will let you grab the particulars from the original recipe on the website with the following words of encouragement. 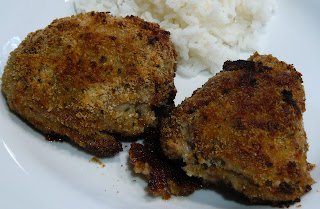 This is one of those especially good recipes, folks. You take 8 ingredients, spend roughly 40 minutes for prep and cooking time, dirty two bowls, one baking sheet, and end up with a delicious dinner entreé for 4-6 people. The chicken stays moist, the crumb topping is crunchy and flavorful, it browns nicely (especially if you run it up under the broiler for a couple of minutes at the end), and the components work together to give you something a lot more interesting than your garden variety baked chicken. 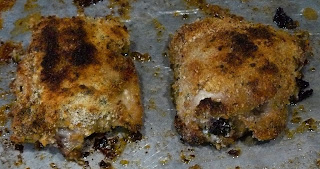 The only switch up I made was to use thighs rather than drumsticks. If you have fans of both cuts in your household you could certainly mix and match. This is such a keeper. Easy, uses ingredients you have on hand, and really tasty. I can already tell this recipe will take pride of place in our regular rotation.

Next up was an old school quick bread loaf courtesy of a weekly feature on Eat Me Daily called Retro Recipes. Staff writer Stephanie Butler has been charged with cooking up various vintage recipes to sample and report on the types of foods our mothers and grandmothers would have considered cutting edge. This Peanut Bread 1953 caught my eye initially because it was in a cookbook that came out the year I was born. 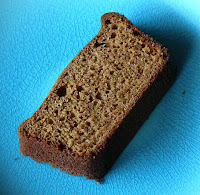 Yeah that's right. I am that old. Let's move on, shall we?

Peanut Bread won my heart as I licked the spoon and realized the batter tasted an awful lot like Tom's Peanut Butter Logs, a regional childhood candy favorite of mine.

I substituted Splenda for half the brown sugar with no discernible loss of moisture, quality or flavor, in keeping with a truly optimistic attempt we are making around AustinAgrodolce to try and shed a few pounds over the summer. Here now the recipe:
Peanut Bread from The Modern Family Cookbook, 1953 edition
1 3/4 cups all purpose flour
1 teaspoon soda
1/2 teaspoon salt
1 cup brown sugar, packed
1/3 cup peanut butter
1 egg
1 cup buttermilk

Sift flour, measure and resift 3 times with soda and salt. Blend sugar into peanut butter. Stir in beaten egg and beat until smooth. Add flour mixture and buttermilk alternately, beating until smooth after each addition. Turn into buttered loaf pan, bake in a moderate oven (350) 1 hour or until well browned. Printable Version 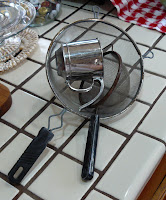 Another simple recipe, using run of the mill pantry staples. This does call for sifting the dry ingredients three times which seemed to lead to a particularly light batter. All that sifting was kind of fun, really, although I'll admit to a bit more flour over drift than is usual.

Once I smelled it baking I didn't mind so much. Once I had a bite I could have cared less about a little extra flour on the counter tops. Or the floor. Or on me.

This peanut bread is sweet but not overwhelmingly so. It would work equally well as part of a quick breakfast or would support any number of more decadent dessert presentations. You can use your own imagination there. Next time I make this I am going to try using chunky peanut butter just for fun.
My only regret is that I have not been making this Peanut Bread for my family all along. It is another one of those basic building blocks of a recipe that supports the kind of simple good eating I truly appreciate. I am sure I'd have baked this whenever company was staying over the weekend, for school holiday breakfasts, to share with friends, you name it.
Better late than never!
Posted by TexasDeb at 10:29 AM

I love, love, love drumsticks and thighs and am always looking for news ways to prepare them. Thank you!

These all look good, but peanut bread? I've never heard of such a thing, and must replicate it immediately! I'm also trying to cut sugar, but don't like Splenda, so maybe I'll try using some agave nectar. I'll let you know how it goes!