I may well be the very last person in Austin to do so, but I became a full on Torchy's convert last Friday night.

There isn't a location all that close to where I live, but the consistently positive things I've heard about Torchy's in combination with a daughter in the house for the summer who was craving them for dinner and requesting that I just "try them out - one time to see" meant a taco road trip was in the cards for this bunch.

I had the Trailer and the Republican as a starting point but I figure I might as well make it my quest to work all the way through the menu. I can't imagine why not. I won't tell you how good they are - you probably already know and if you don't then Ha-Ha! I am NOT the last person in town to try one after all. Yay me.

After noting a couple of days ago that one of our oldest largest jalapeño plants was leaning waaaaay over I went to investigate. It was not damaged per se, it was absolutely loaded down with a bumper crop of peppers. I harvested as many as I could hold and decided while doing so the time was ripe for a batch of home made jalapeño jam.

Now on the pectin paperwork this stuff is called Pepper Relish but that my friends is a misnomer. Any recipe calling for 4 cups of chopped peppers to be combined with 5 cups of sugar and 1 cup of cider vinegar is going to yield pepper jam, not anything I'd call relish. The recipe suggests using red and/or yellow bell peppers in mixture with the jalapeño peppers but I could not find any organic bells other than green. I do aspire to aesthetically pleasing results as much as the next gal, but when it comes to eating something that has been processed and sitting in a jar in the pantry for months at a time? I want that something to be as organic as I can get it. Rule of thumb, that has been my approach for all my jammy work. So far I have been able to secure organic everything except for pectin. Truth be told I simply haven't investigated that. Yet. 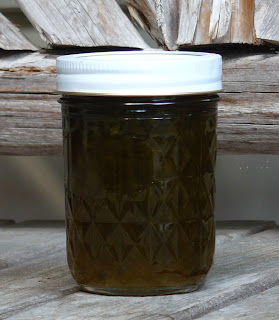 So all green peppers it was. The results seem to be slightly less colorful but no less flavorful than I'd hoped. My jalapeño peppers are not particularly hot (I must not have been angry when I planted them). I decided not to leave any seeds in this go round to turn the heat up any. I can try that next go-round once I get a feel for how it will turn out. I do think the jam will heat up as it ages a bit but that will be fine by me.

Once again the fruity bits all floated up to the top. I don't fret over that (so much) any more at least. This time I waited until the jam had cooled and then shook the jars to redistribute the pepper bits. Hopefully that won't interfere with the jam setting and hopefully the redistribution will stick. If not, I'll simply stir the stuff up once I've opened a jar and let it go at that.

I'm hopeful to make a batch of peach cobbler this weekend. If I do I'll share the recipe because it is amaaaaaazing. Like Torchy's Tacos. Seriously, if you are the last person (after me) in Austin to give them a try don't wait any longer. You can say I sent you.
Posted by TexasDeb at 2:04 PM

You're not the last! I have no excuse now not to try Torchy's.

What a lovely crop of peppers you have, too. I'm still waiting for my first pepper to appear. Perhaps they want more sun.

Iris - I kept hearing how Torchy's Tacos were the best and I will have to admit that although everybody has their own idea of what the best taco might resemble, these were some mighty fine examples.

The leaning over with peppers plant is going on its second summer now. My "just planted this year" pepper plants are not producing much even in the way of flowers yet. Except the banana pepper plant. It seems happiest and has 3 good sized peppers already.

Maybe you and I can work out a pepper for tomato trade. My tomato plants look pathetic still. Hardly anything going on in the tomato department at all.