The Next Food Network (Lone) Star 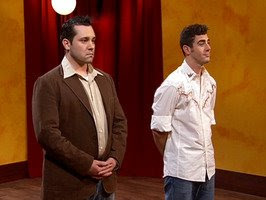 Had to happen sooner or later. The reality (and I use the term loosely) series The Next Food Network Star is coming to Austin to hold an open casting call for Season 6.

According to Alana Jemas the casting producer they are looking for people who are "full of life, passionate about cooking and knowledgeable about food to meet us in person at the open casting call. Anyone is welcome: chefs, line cooks, home cooks, caterers or culinary enthusiasts who might be interested in becoming the host of his or her own cooking show on Food Network!"

After reading a bit about the process and realizing Guy Fieri got his start on the show, I've actually been watching it this season as a gapstop measure to prevent the shaking jones while waiting for TopChef to begin again. Not like I enjoy watching Guy, I don't think I've sat through one entire episode of his show. But I do see he snagged a full fledged career out of this reality show process and that is something I find weirdly impressive. I mean, I can see how it can launch somebody. Now I want to see it launch somebody worthy.

Which may be where you come in.

So far the other television viewers in this house are not particularly impressed with the Next Food Network Star as a concept, with the contestants overall, or with me for wanting to stick it out for at least the rest of the season. I will agree - TNFNS is populated with a few decent contestants but also subjects viewers to what for me is a bit too much air time featuring inadvisable commentary and a couple of clearly out of their league cooks.

I hate to seem disloyal, but Keller Texas Mom of 4 Melissa D'Arabian is not who I necessarily want representing "Texas Cooking". She clearly has a few chops in the kitchen and being a former MommyCook myownself I do not wish to be caught denigrating the millions of us out there generating good food for our families day in and day out. I most certainly do not.

However, when I tune in to a Food Network show I want to see somebody calm and collected. Somebody with more going on than I think I already have going on in the kitchen, quite honestly. I already have the internet for dinnertime food ideas, I want to be ENTERTAINED by a trained chef with personality and cool tricks up their sleeve when I take the time to watch a cooking show on television. I want pizazz, I want new techniques demonstrated, I want some articulate person who can tempt me into trying something new and daring. But that's just me. And I assure you, I am clearly not reliable.

All by way of which I yet want to say, look, Austin. There are scads of you out there who can cook up a storm, have loads of personality, and maybe even the presence of mind to bring that all together in front of cameras on a sound stage/kitchen. So here is more information on the open casting call to be held Friday, July 17th, 10am-4pm at the Hyatt Regency Downtown (208 Barton Springs Road).

What to Bring:
1. Two recent photos
2. A copy of your resume
3. A filled out application found here.

For more information or questions please e-mail them at: nfns6austin@yahoo.com.

I can't help but think if we get a good mix of trained Texas chefs in the mix the show will move up to a whole new level. How could it not? The world may begin to understand why folks love food so much around these parts, enough to tolerate the summer weather. It could prove mighty entertaining. Y'all get to it!
Posted by TexasDeb at 1:21 PM

Labels: The Next Food Network Star

I'm pretty sure I would WoW everybody with my SPAM quesadillas. :)

I'm pretty sure you would. Too bad about that puking part for real.

SWEET! I was so hoping you were. I think you are PRE-CISE-LY the kind of person I'd be interested in watching and listening to on TV.