Weekend Eats Part 2-Getting Your Stew On 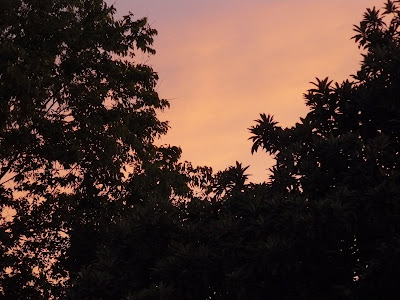 After a lot of fanfare it turned out we were not experiencing any big weather around Central Texas this weekend which was good news for the evacuees holed up here. However, we were in fact forecast to have much cooler temperatures over the week to come.

To me, cooler weather means a foray back into stew and soup territory. Those wonderful, cook most of the day, fill the house with aroma type dishes that are served piping hot in a bowl with chunks of wonderful bread on hand to sop up the last bits.

I had a Richardson's pork roast from a previous farmer's market visit calling out to me to be prepared. I also had a recipe from a long time friend, more a technique than an exact recipe really, that is a family favorite.

In the past I'd always prepared this stew with that anemic "other white meat" type of standardized "we've bred all the flavor out" pork available in regular markets. Nonetheless, we loved the flavor of this dish even then. How much more delicious, I wondered, would this be if prepared with really flavorful naturally raised pork? I was determined to find out.

See for yourself. This is the roast, cut into chunks in preparation for dredging in seasoned flour and browning. Does this look anything like white meat to you? And that is the point. Pork is not white meat people. It shouldn't be pale at all. It should look like this. 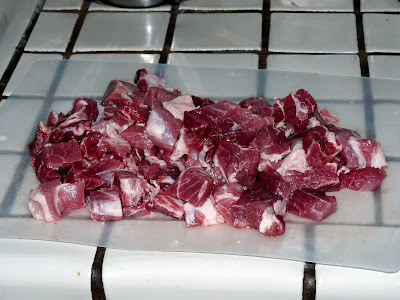 I developed my own tricks to cut down some of the prep time. Pork stew is one of those front end loaded recipes that while not at all difficult, does require standing at the stove time in advance of having anything ready to eat. To slightly complicate matters, we only have a half capacity stove top due to the presence of an indoor grill. So, for me, this works best using a second independent heat source. I put my dutch oven on the range top, and at the same time use our large electric skillet.

The technique for the stew runs like this. You cut up your pork, and render the fat in a dutch oven which you will then use to soften the non-meat ingredients. 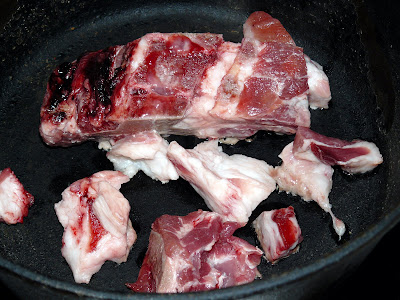 While the fat is rendering, you will dredge your cut up meaty bits in seasoned flour, and brown them in small batches using some reserved bacon fat in combination with oil as needed. This is what takes most of the time, browning the dredged meat in batches, but it is well worth the wait. 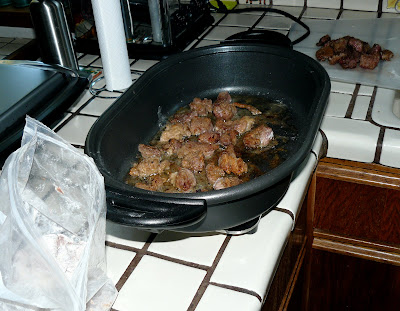 When all the meat is browned, any remaining seasoned flour is made into a roux in the skillet. By now all the vegetables have been softened in the rendered fat, 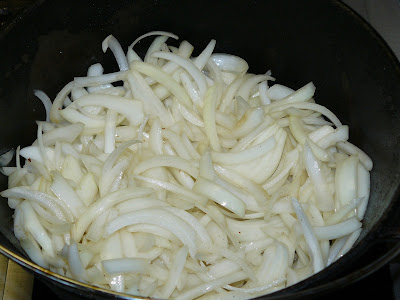 and everything from the skillet meets up with the veggies in the dutch oven. Broth is added, the heat is lowered, and the whole shebang cooks, cooks, cooks, until the proteins let go of their connective tissue and loads of flavor, and the meat and vegetables merge into an amazing stewy wonder. 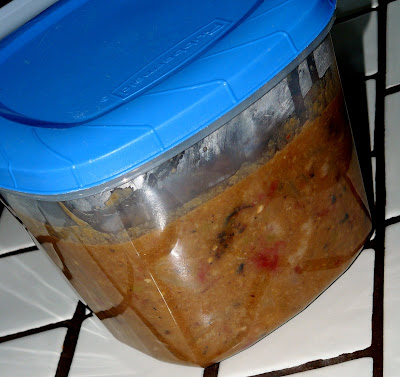 I like to put the stew into the refrigerator at this point to sit at least overnight while all the flavors really get into holding hands and playing nice. Then all it takes is a nice slow reheat the night of serving, (with additional liquid added as needed), and a quick stir in of some sour cream. You can offer a salad if you wish, or simply stick with the addition of good chewy bread (or flour tortillas - your call), and you are in pork stew heaven. 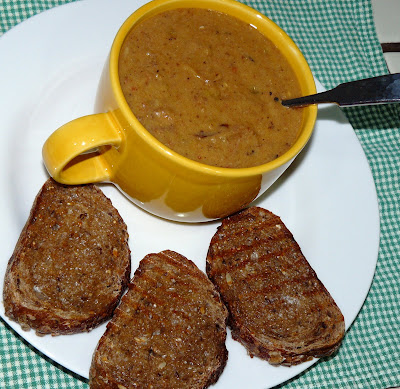 This may not be a food stylist's dream. It is not the most photogenic stew ever, but whatever it lacks in visuals it more than makes up for with aroma and flavor. But don't take my word for it.

Here are the notes on this stew as originally dictated to me by my dear friend who is such an instinctive cook she never really uses or seems to need recipes. Hopefully, between her guidelines and my comments, you can and will get your own natural pork, and put this together at your house for your own delicious results. [Any amounts given are approximate.]

Render fat from pork in dutch oven. Add onions to fat and cook until soft.

Meanwhile dredge pork cubes in seasoned flour and cook in batches in large skillet until browned. Hold meat aside, off heat, until all cubes are browned.

Add garlic to onions in dutch oven and cook until fragrant. Add tomatoes and green chiles. Add browned pork cubes to dutch oven along with chicken broth. Brown any remaining flour to make a roux and add to dutch oven. Stir well to combine.

Cook over low heat until meat is falling apart (this can take a couple of hours or more). Immediately prior to serving add sour cream until just heated through. Serve with tortillas or bread. (I only add sour cream to the portions we are eating at that time in order to make reheating leftovers less tricky.)

Yield: 6 generous servings
Posted by TexasDeb at 6:23 AM