Shopping to support eating seasonally and locally happens different ways for different people. A friend of mine has been getting local organic food delivered to her doorstep in boxes from the folks at Greenling every other week.

Despite having a family of four with healthy appetites to cook for, she is discovering for herself how eating seasonally and locally can be somewhat of a challenge at times.

Take eggplant. Which is precisely what she begged me to do. They'd had eggplant in every box so far and she had run out of ways to prepare it that anybody was interested in helping her eat. She'd had her eggplant and eaten it too and either I was going to take the eggplant off her hands or into the trash it would go, as bad as she felt about that.

Not forgetting that I have 3-4 robustly healthy and ripe to past-ripe eggplants in my own garden, I still told her I'd take the excess. I had plans on trying a roasted eggplant soup recipe and if it turned out, I figured I could make several batches of soup, freeze it, and be ready to enjoy local eggplant soup long after the plants had given it up for the year.

She also gave me a few serrano peppers, a Meyer lemon and a couple of adorable teensy key limes she didn't think she could use.

Enter the Fall Pantry Challenge. Eggplants, peppers, lemons and limes all hit the "must use up before they spoil" list.

So next up? Eggplant Soup and Roasted Pepper Mayonnaise

Here's how it went:

The eggplant soup recipe was very easy - more a technique or a guideline. (if you'd like the original version with specifics go here) 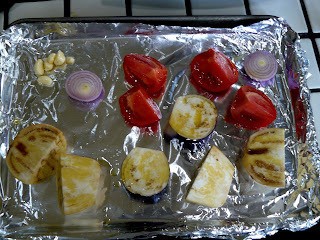 You cut up and oiled eggplant, tomato, onion and garlic. 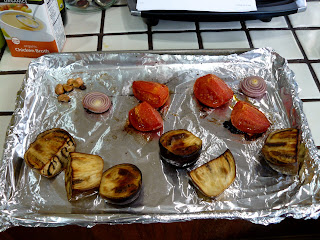 After roasting the vegetables at 400 degrees for about 30 minutes (until veggies are tender and brown in spots), you let them cool slightly, then scoop the eggplant out of the skin into a heavy saucepan. Add the remaining roasted vegetables, some chopped fresh thyme, and some chicken broth. 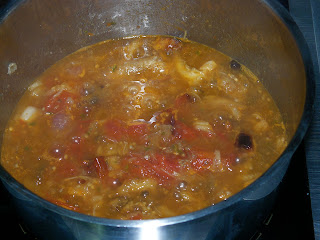 Simmer until onion is very soft. Cool slightly and pureé in a blender until smooth. 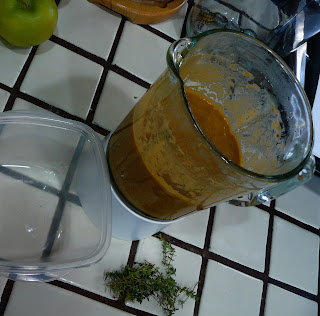 Stir in cream to taste and heat through without boiling. Season with salt and pepper, and serve with crumbled goat cheese as a topping. 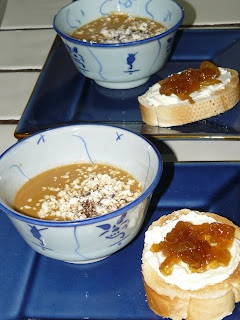 I grilled the peppers to blister the skin to make it easy to remove. A skinned roasted pepper will last longer in the refrigerator than fresh will. That gives me options. After talking to my son about the tortilla crusted chicken I'd made recently he shared with me how they use crushed baked potato chips as a delicious coating for baking fish or chicken - I can't remember which - at the spa where he works.

I had two fish fillets from Wheatsville to cook for dinner, wild caught arctic cod this time. I thought I'd use a grilled skinned serrano pepper mixed with mayonnaise to stick on a crunchy layer of crushed baked potato chips. 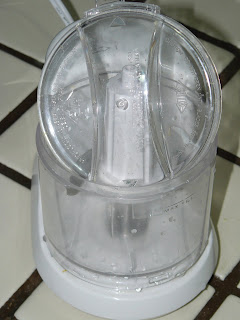 first to crush the chips and then to combine the pepper with the mayonnaise. I used one serrano pepper and about 1/4 cup of mayonnaise, plus some freshly ground black pepper and I juiced one of the key limes into the mix for a bit of acidity.

I think my mini-chopper is hot stuff. Great for small jobs- it only handles 2 cups max. Easy to clean after and not particularly expensive. I think I got mine for $18 originally although now I think they are running closer to $25 dollars. 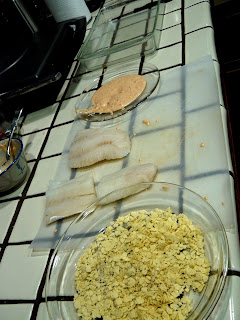 I digress. Back to the Cod. I cut the fish up into three reasonably consistently sized pieces, coated each one with the mayonnaise, then dredged each fillet in the chip crumbs.

Oh, ahem. You may have noted a suspiciously shaped impact crater in the mayo mixture in that last shot. According to the splatter pattern, you may have deduced the droplets indicate "something" fell into the mix prior to the fish making their debut. Let me say this about that. Sooner or later, everybody who tries to take photos of their food while making dinner potentially could find themselves fishing something other than fish out of their coating mixture. Thankfully, the something other than fish still takes photos although the strap does look a bit more, well, used, now.

I digress again. Back to our Cod fillets. I placed them into a baking dish I'd lightly oiled, 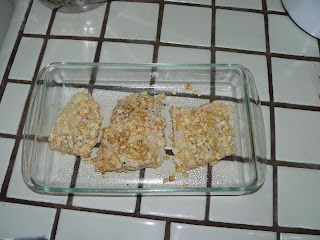 and put them into the oven at 350 degrees. When I checked at 20-25 minutes the chips were nicely browned and the fillet was firm to the applied knuckle, so I took them out of the oven to rest while I plated up the appetizer sides. 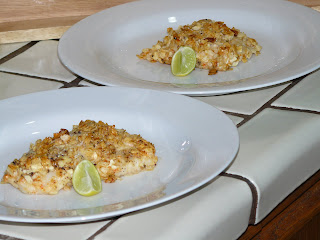 And there you have it - Fall Pantry Challenge Two. Eggplant Soup and Oven Baked Cod with Potato/Pepper Coating. Check and double check. Two in the "I Win!" column so far. What's left? Let's see, the carrots, honey, bananas, and lemons. Don't go anywhere - it's just getting good.
Posted by TexasDeb at 12:17 PM