The first in a series always garners a little extra pressure to captivate, entertain and inform, and even though this is not my first Wildlife Wednesday post ever, it is the kickoff for an entirely new calendar year, so I have been feeling a bit panicked.

You see, with some fairly chilly overnight temperatures in play recently it looked like all I'd be writing about was a No-Wildlife Wednesday.  Over and over I bundled up and went out roaming with my camera.  It was just me and the plants, one of us grumpily thinking that it being too hot outside maybe wasn't really so awful.  Because with the exception of a few pretty tiny gauzy flying thingies caught in the sunlight one afternoon, it felt pretty much like I was the only thing moving around outside. Which is, of course, utter nonsense.  You are never, ever alone in a garden. Easily visible to the casual observer or not, the garden beds, landscaped areas, heck, even the potted plants and the lawn are absolutely teeming with life all year around. 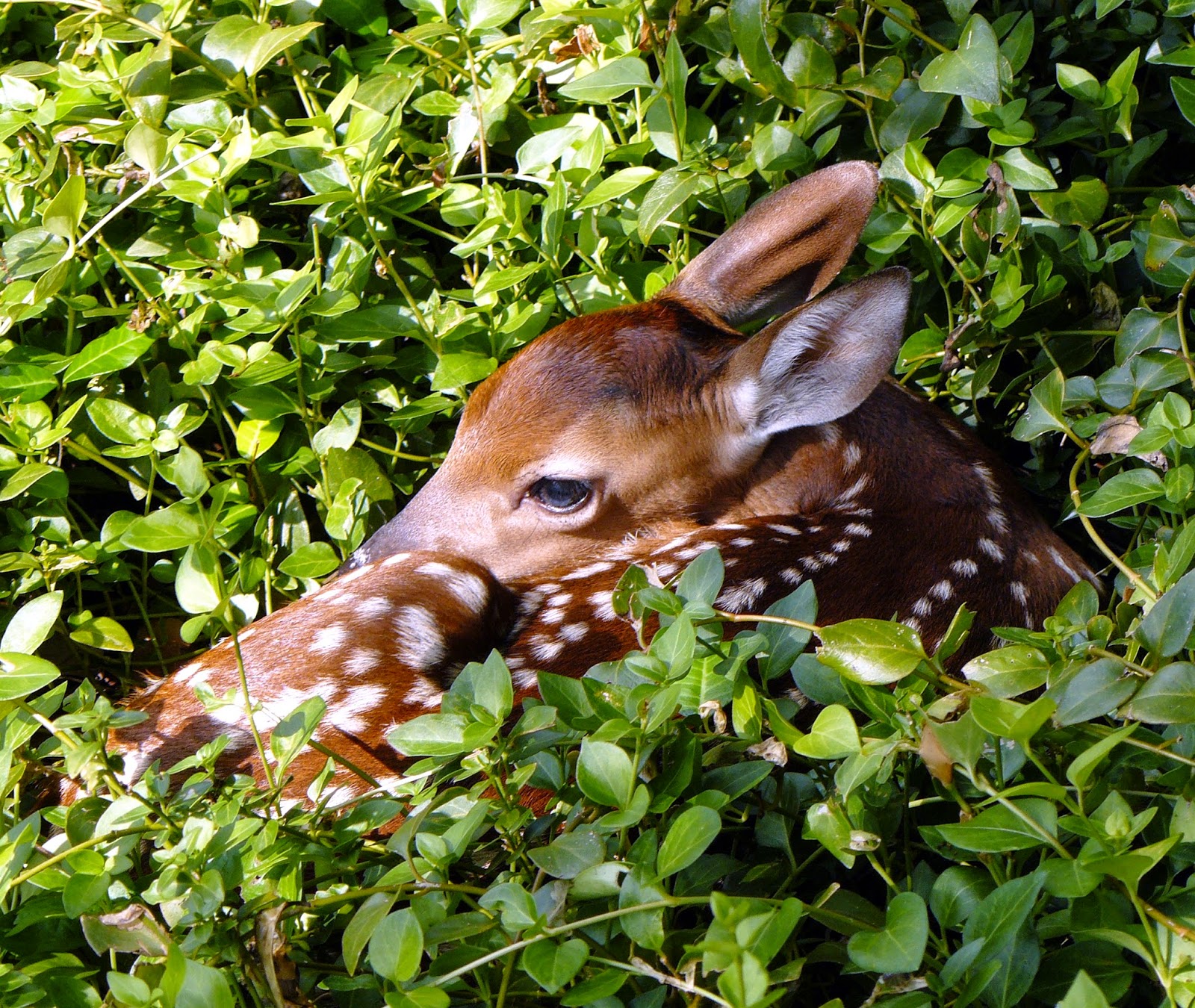 Some of that life, of the stomping chomping pooping variety, is agreeably harder to overlook than the little bitties. 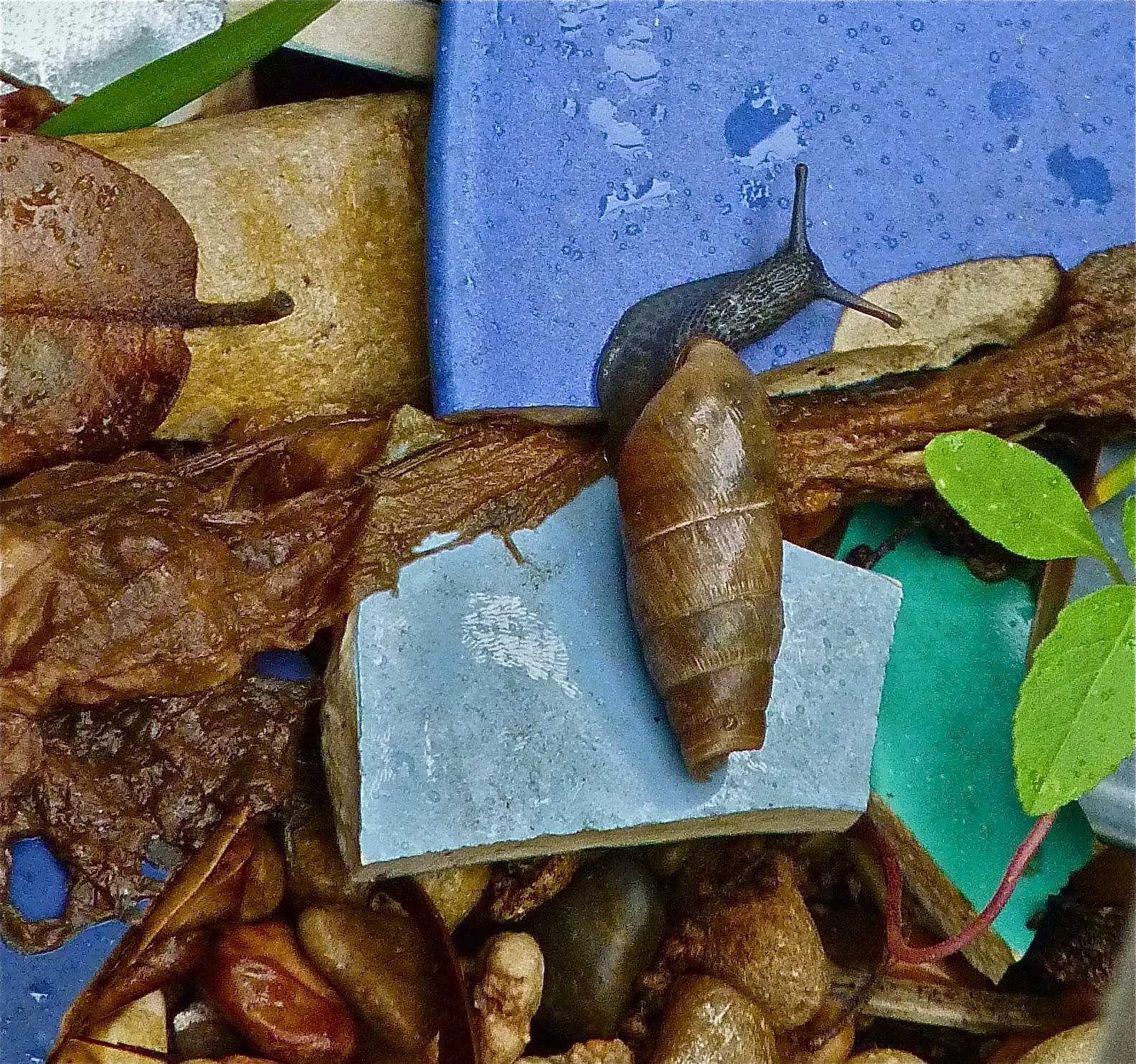 But this time of year?  Large or small, life in the wild is playing out under protective cover and while that makes it all that much harder to capture the action on camera, it is impossible to deny. 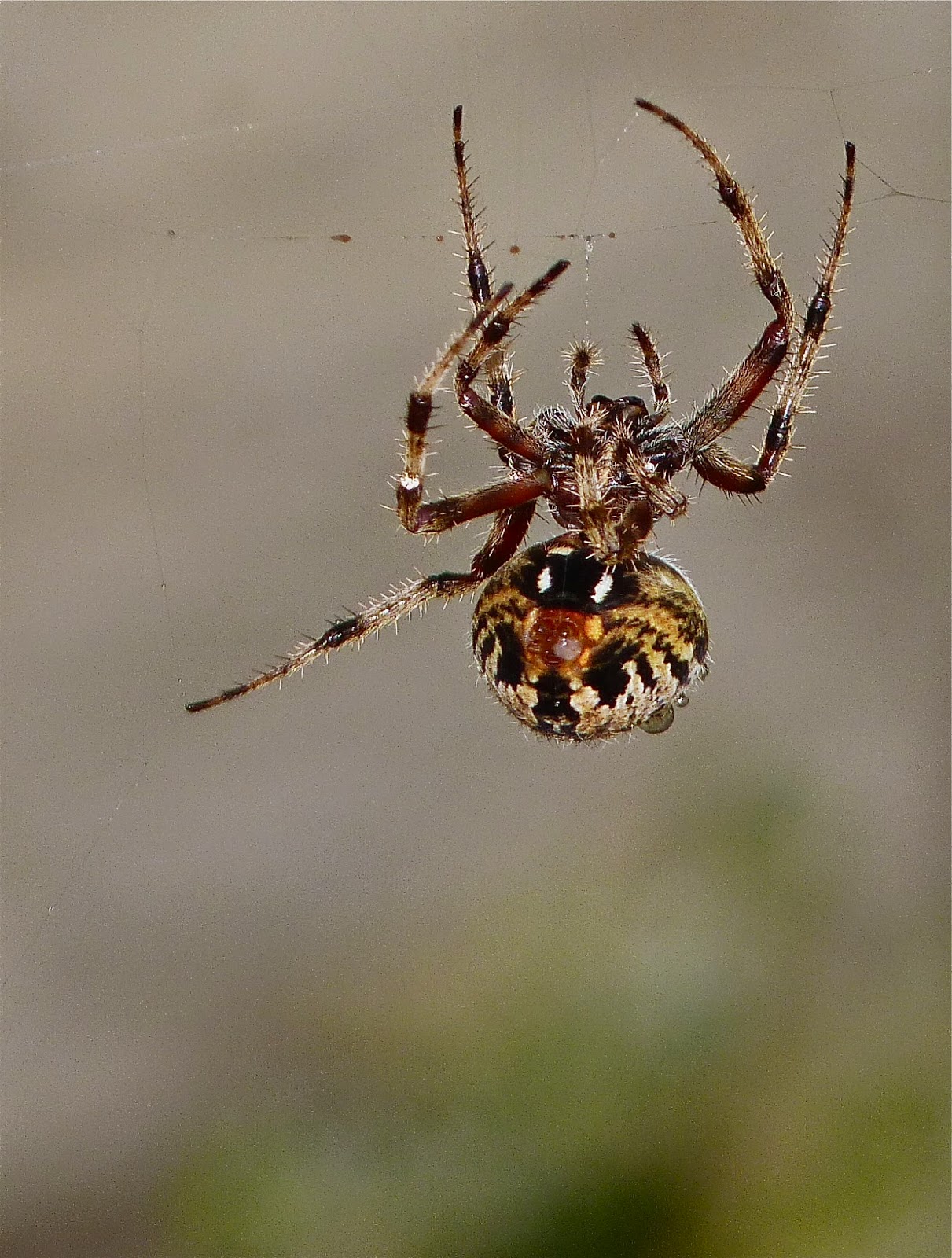 In every nook and cranny, every day, hot or cold or wet or dry, something with a mouth makes gardening a little more challenging, a little less predictable. 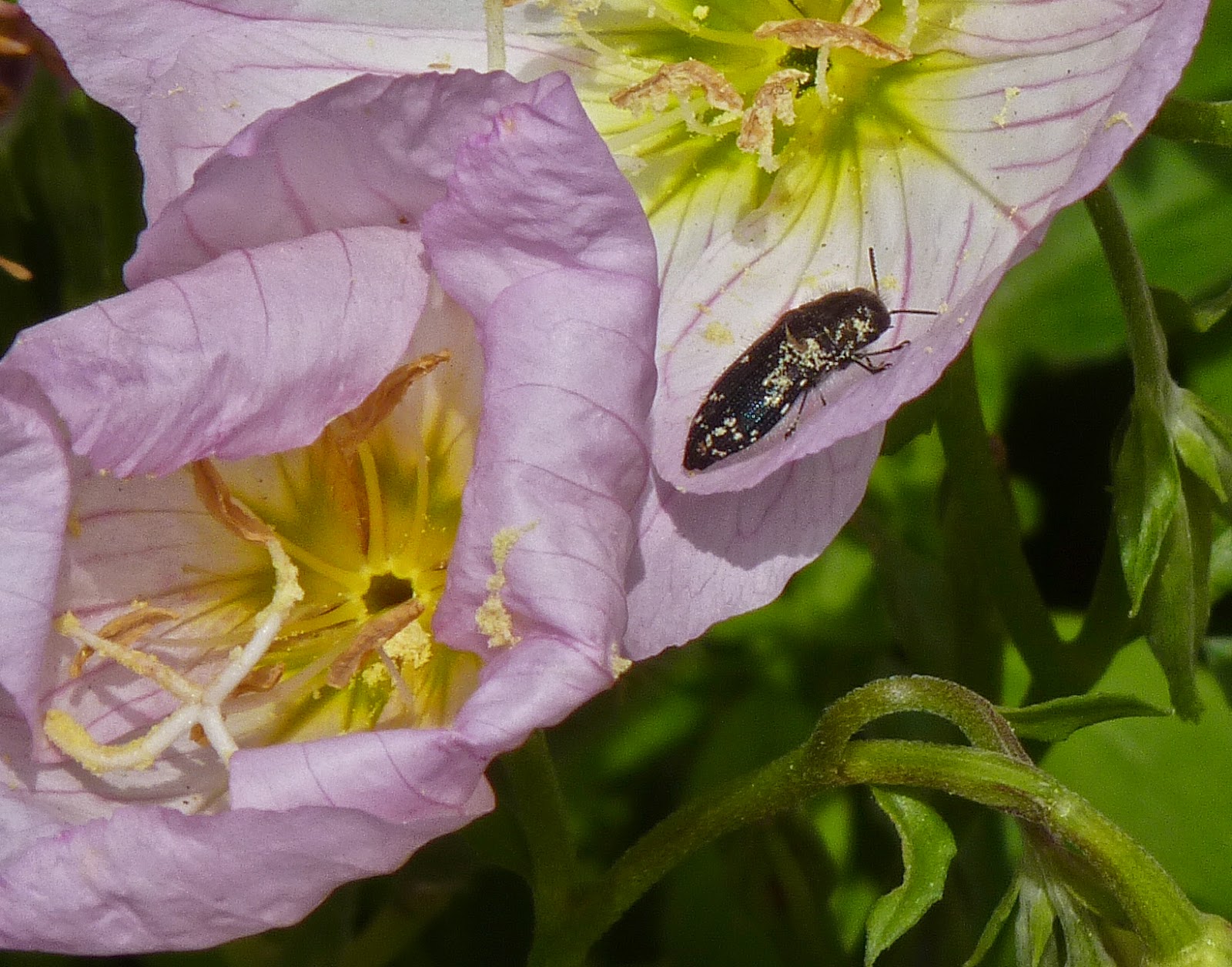 And complain as I will, learning about those very same mouthy critters keeps the practice of gardening, at least for me, not only a lot more interesting, but a lot more fun. 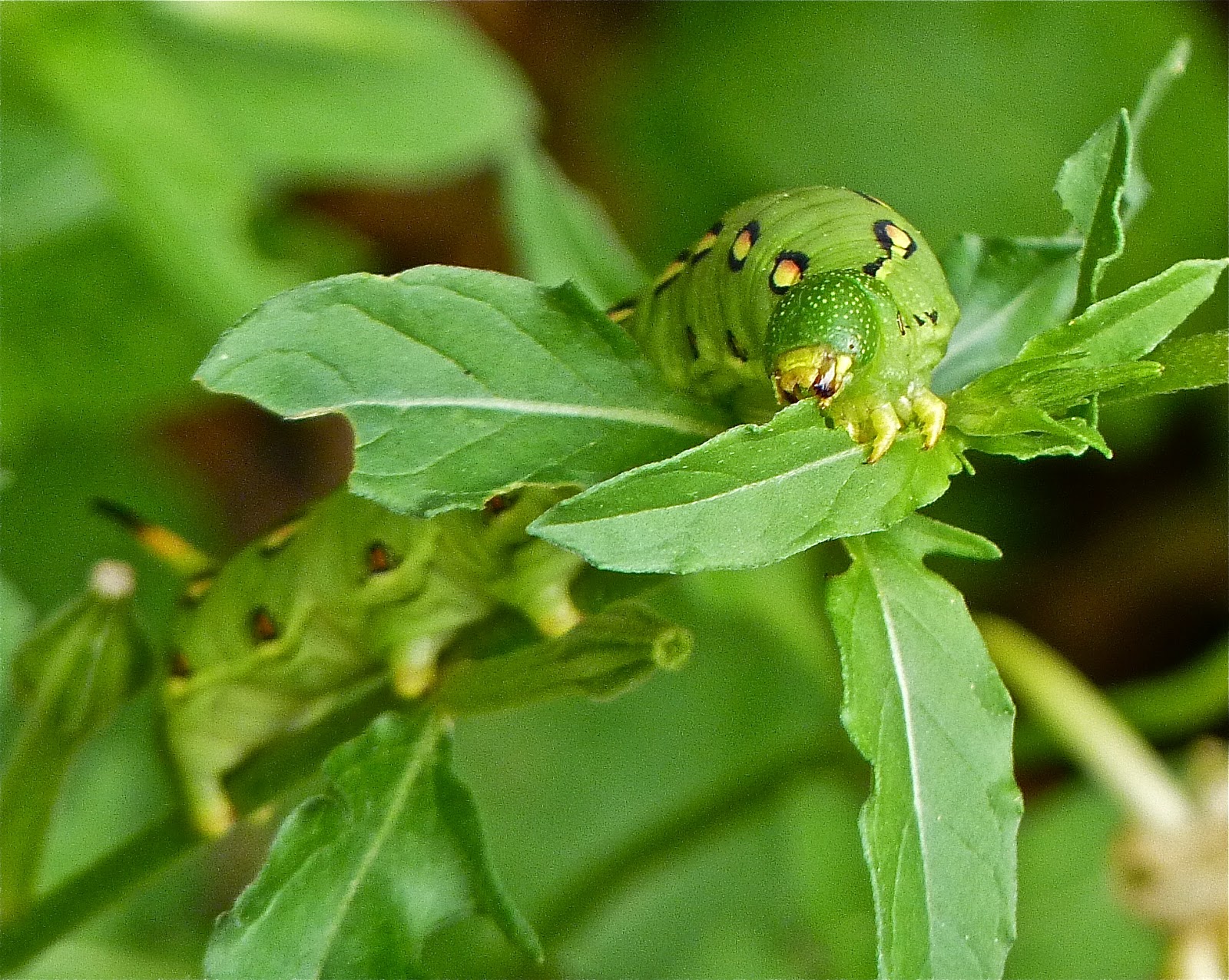 I am so regularly astonished and delighted by what I discover. 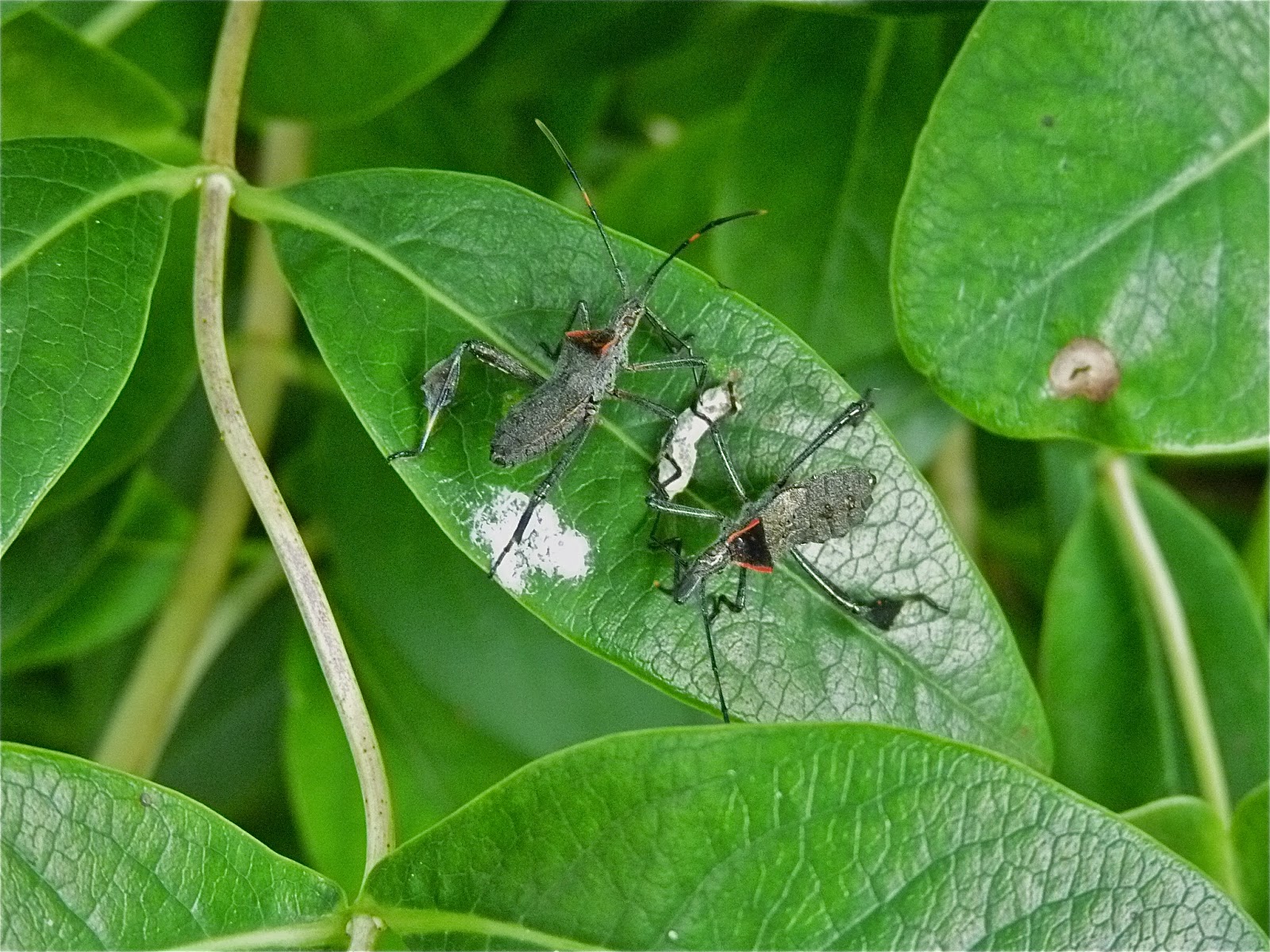 For example, recently while doing a little sleuthing to finally put the name to a succulent I've grown for years without knowing what it was called, I ran across a statement about the plant growing in its native setting that stopped me in my tracks. 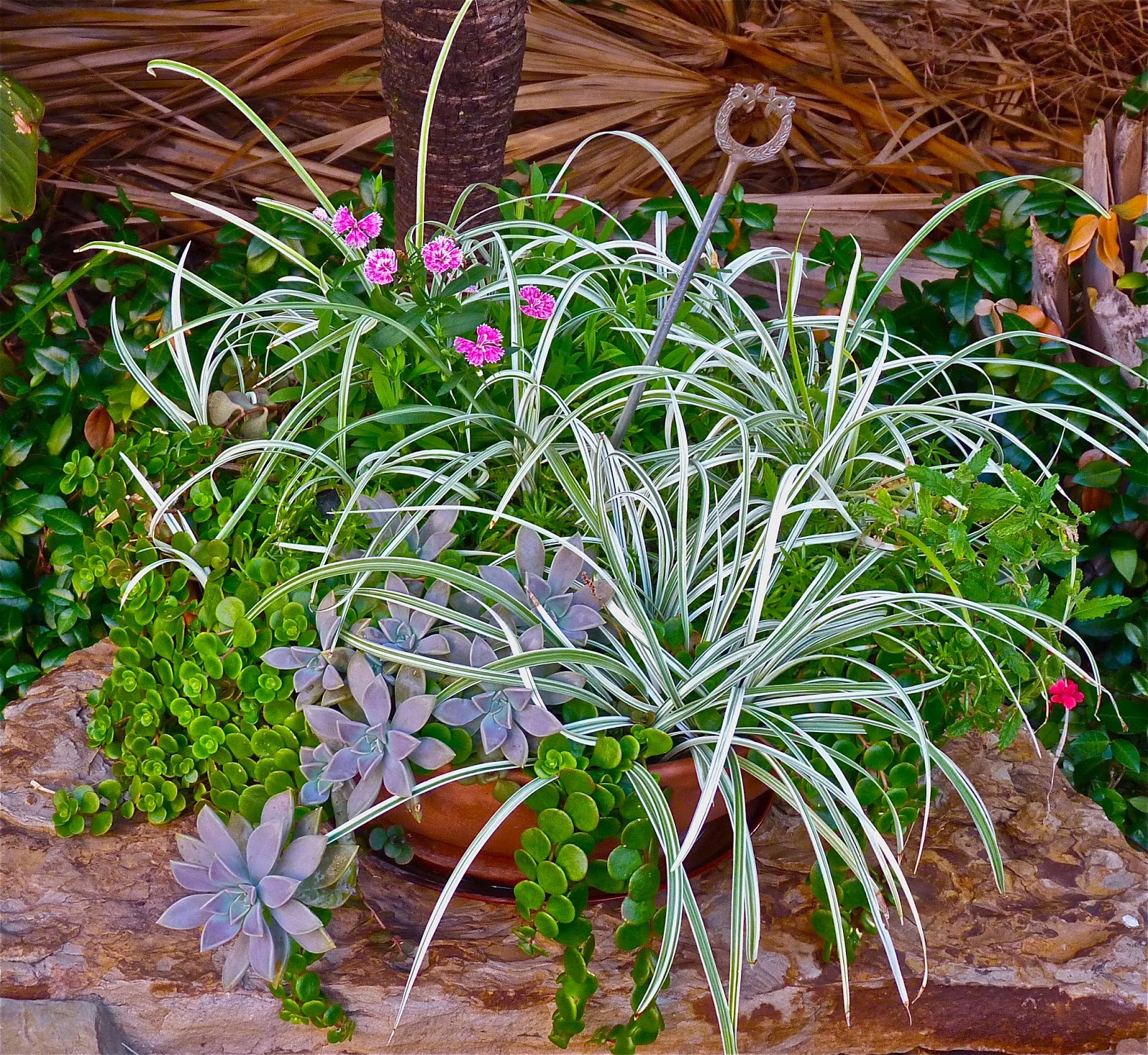 The succulent, which I have growing in multiple settings, is called Portulacaria afra.  There are several varieties with different sizes, leaf and stem colors. They all tumble delightfully over edges and feature lovely little round leaves that contrast beautifully with the rosettes and spikes of other succulents.

Portulacaria afra serves as the ideal "spiller" component in any thriller/filler/spiller combination for dish gardening.  It is easy to propagate (in fact try and stop it) as any branch that breaks off will rapidly develop an independent root system.  I just love the stuff. 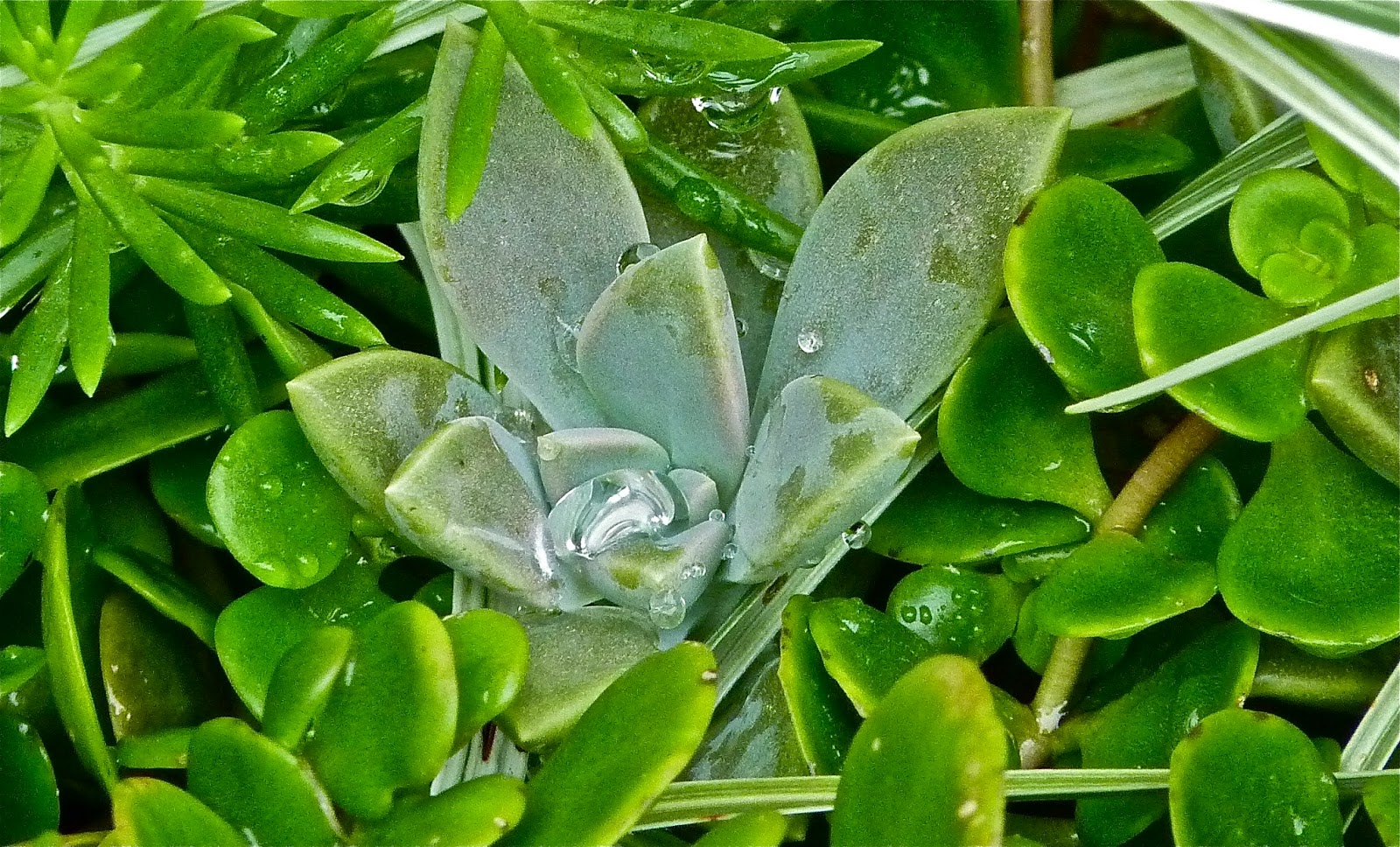 The particular variety I found is low growing, Portulacaria afra prostrata, and while that is fun to speak aloud, sounding quite a bit like a sorcerer's spell, it was the so-called common name for this little garden workhorse that really grabbed me.  In South Africa where the plant originates, Portulacaria afra in all its growth forms is simply called "Elephant Food".

Ponder that for a moment.  As much as we Central Texan gardeners gritch and moan about the ongoing assaults various bugs, raccoons and even white tail deer mount on the plants growing in our unfenced spaces, the idea that a plant would be acknowledged by its very name to face destiny as elephant food? Well, that was sobering. 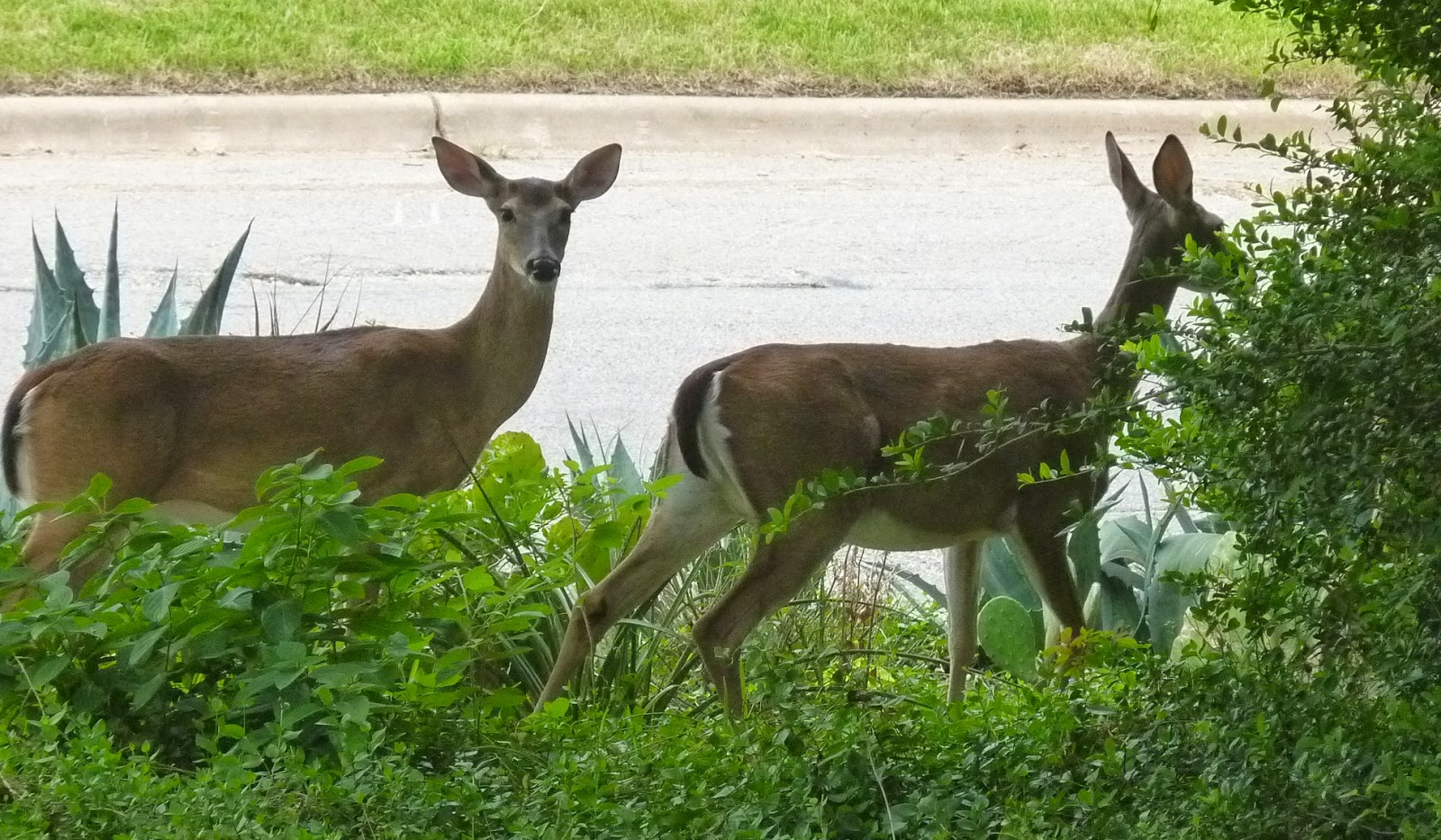 I tried to imagine the rigors of gardening in the company of not just any hungry herbivore, but one that must eat enough to support a body the size of a minivan.  All at once, my perspective shifted.  I realized I am grateful, deeply grateful, to "only" have deer at the top of our local munching chain.

Thanks as always to Tina at My Gardner Says for hosting, and to you for stopping by.  I hope you'll join the fun this month and link your post to hers on her site in the Wildlife Wednesday comments section.

Such great photos--do I like the fawn or the caterpillar best? Hmm. Maybe it's the lady bird beetle with aphids that is the better shot! All fantastic and thanks for joining in on this becoming-very-cold-Wednesday. And I love that container with all your cascading lovelies. I'm not good with containers--either they look contrived are simply stupid. But I sure know container perfection when I see it.

Happy 2015 to you, your deer and the rest of your garden.

You've finally broken through my decades long succulent prejudice. That container is proof that they can be beautiful. Wow. As always all the photos are lovely but I especially like the look on the face of the deer in the last picture.

Tina: Awww - as always you are generous with your words of kind encouragement.

I like container gardens because they provide a microcosm where I can play with non-natives (relatively) guilt free. If I don't like the results I simply start over from scratch, an option the garden at large does not so easily offer.

Debra: Ha! That deer was SO annoyed with my presence. She was waiting for me to leave so she could get back to grazing and after I got my shot I kept moving closer and staring until she finally moved on. To me that photo represents a tiny victory for gardeners everywhere.

We lived in California for several years and it was there I was first introduced to dish gardens and succulents both. Since it never freezes where we lived, succulents were ubiquitous and I came to deeply admire their many forms and colors.

This was a wonderful tour through the life - big and small - in your garden. As much as I complain about the horrors wrought by raccoons in my garden, I also count myself lucky that I only have a few destructive critters to contend with - deer, armadillo, and voles all sound terrible, and I can't imagine a grazing elephant in my garden (although it would be exciting - once!).

Kris: Thanks for dropping in! Spotting an elephant out grazing in the garden would be pretty exciting in every sense of that word, wouldn't it? I remember an old joke that ran something along the lines of "what does an elephant eat?" answered by "anything it wants!".

I've got raccoons but not so furiously and capriciously destructive as yours. The ones here seem more interested in our compost than our growing plants (thankfully!). There are advantages and drawbacks everywhere there are gardens. I'm determined to focus more on our local advantages this coming year and see if a better attitude translates into being a better gardener.

Great post. Wonderful pictures. I love the potted succulents. And everything looks so green!

Lovely photos of garden friends and foe. We certainly delight in our wildlife-well, most of it. I saw a ladybug on a warm day last week and at the same time realized that aphids were on my greens. Can't have one without the other. I just hope the turkeys don't find their way in here because I fear they would destroy the whole garden. For now I am happy that my neighbor is fattening them up.

Tina beat me to it... the fawn and caterpillar pics are definitely my favorites. The fawn is so precious, but I think the cat is the winner between the two. Do you know what kind it is? Thanks a ton for sharing - I always enjoy reading your posts!

Anna: I fear I've misled accidentally. The photos shown are all from my archives - not from this past December or early January. That said, things here have been really green but last night's hard freeze will take care of a lot of that!

RR/Jenny: No - your beautiful greens!! I had never noticed how cold tolerant aphids were before recently. I suppose their roly-poly shape should have signaled insulation but I always imagined they'd just freeze, fall to the ground and problem, solved.

Good luck with those turkeys - it is my understanding poultry scratching in a garden is quite disruptive. Still, I'd feel free to try and chase a turkey out...but certainly not an elephant!.

Rebecca: That caterpillar is a white lined sphinx moth if I recall correctly. I didn't get many cats this past year but in years prior they were a near constant feature on our fennel plants.

A great post on how much we can see in the garden from small to large. Those deer! They just wait us out and go back to their destructive ways.

Your container arrangement is gorgeous.

Shirley: You and I are both bravely gardening on the front lines when it comes to Deer Battles. And you're so right - they have the advantage of always being outdoors ready to sample our plants whereas I am quite happy to hide inside today and make chicken soup.

Thanks about the container - it is one of my favorites!

I have to wonder which plants where you are may be renamed, "deer food"? That is funny to name a plant after its fate!

The dish garden is awesome in lushness. The leaf with 3 insects on it really does show all the inhabitants once there is something to inhabit. Would be a fun study to count various fauna in various gardens or natural areas in a given area.

DryHeat/DC: That is a funny way to name a plant, isn't it! Of course it just wouldn't work to name plants "deer food" because there would be way too many candidates vying for consideration.

Any time you want to come count fauna you just let me know. You have an open invitation.