Seven years can be a long time in the life of a plant.

Working backwards, six years prior, the opuntia cluster shown in the photo below (to the right of the pink periwinkles), had dutifully grown from a single pad. That pad arrived one year prior, after spotting a pile of "Free - Help Yourself" spineless opuntia at the curbing in a neighbor's yard.  I took a few paddles home and placed each one on the soil where I thought a mature clump of opuntia would eventually provide structure and interest.

In several spots, including alongside our driveway, I had to create growing space on the soil for the pads by clearing away pre-existing ground covers originally planted decades ago by the previous owners.  I wondered, would the cactus take hold quickly enough to compete?  I know now I need not have worried - the opuntia rooted and easily held its ground.
Fast forward to late last year, at some point between the departure of Halloween porch pumpkins and the arrival of holiday door wreaths. Gazing out with a critical eye I abruptly realized: the appearance of that opuntia had become jarring.  After the most recent replacement of asian jasmine and vinca major with native perennials of varying sizes and the easing in of additional rocks and gravel to further delineate the open spaces created, the cactus wasn't working. 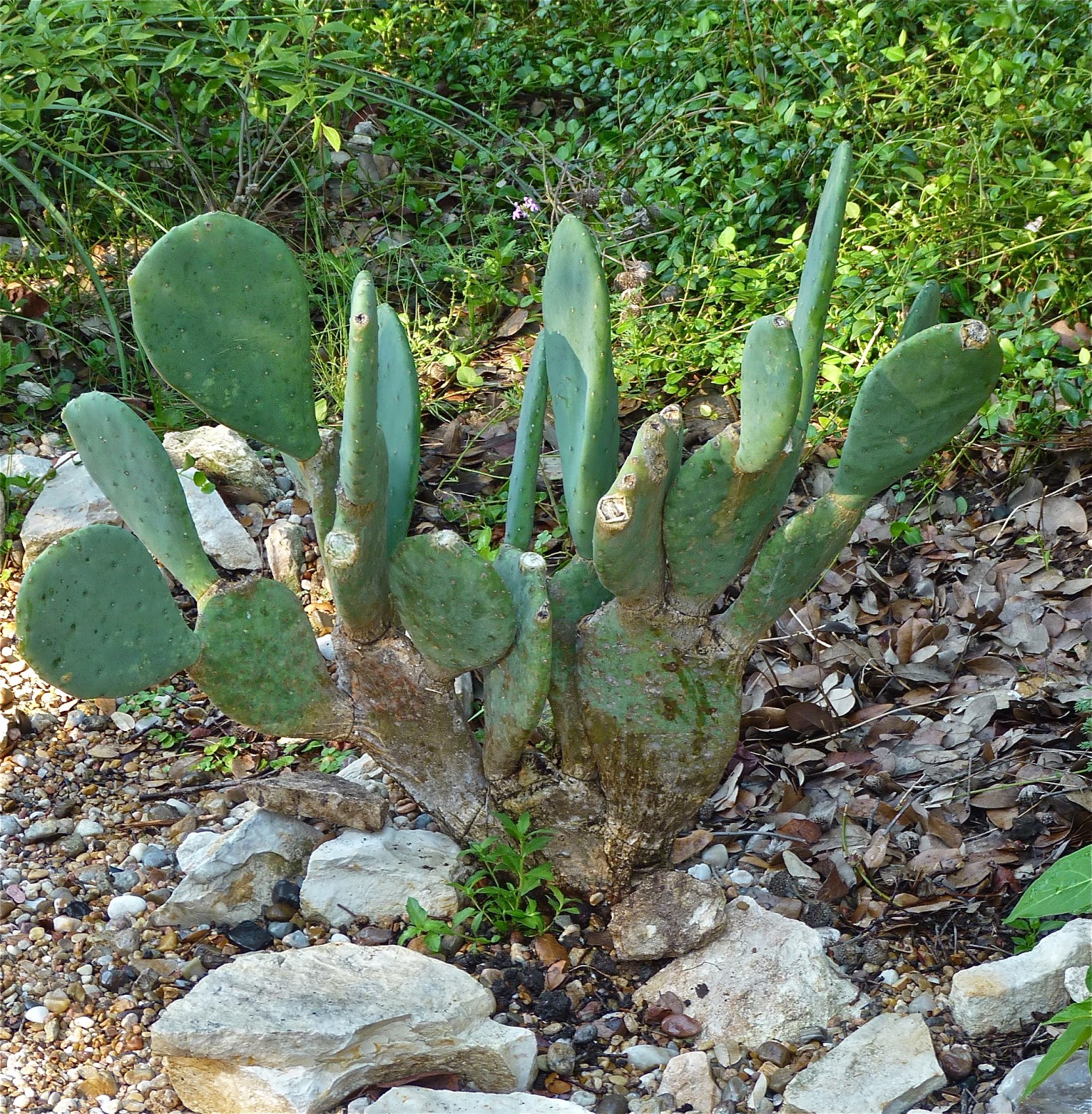 The thick pads of the opuntia were now too much, too weighty looking, too close to the drive.  A natural curve had developed to follow the sun and drip line under overhanging oak trees, and the opuntia was fighting that curve.  My mind was made up.  It simply had to go.
And yet I hesitated.  How easy would it be to remove an established opuntia cluster with its woody base and multiple "stems"?  This variety is designated "spineless" but that is a misnomer.  These cacti sport stealth spines on every pad.  There were other perennial plants growing in close proximity to consider. Would I be able to dig out the opuntia without tearing up everything growing around it?

There was only one way to find out.  Enticed by the prospects of a warm and sunny afternoon, I grabbed my trusty shovel, (dubbed "sprinkler killer" by my Hub after multiple wire cuttings) and headed out to do some experimental heave ho-ing.  To my surprise and delight the opuntia popped right out of the shallow soil, leaving only the slightest of indentations.

The cacti cluster had one several foot long root growing horizontally back through the ground covers that required a little extra teasing out.  As is frighteningly typical, after pulling out that root, the surface of the jasmine closed seamlessly back over the opening created, rendering it invisible. Asian jasmine is scary stuff, folks.  But that's a story for another day. Overall the opuntia removal was painless. For the gardener, at least.
Without the visual interruption of that chunky opuntia, the negative space recently enlarged along the driveway's edge works much better as both a contrast to and a lead in towards the multi-layered xeric plantings growing just beyond. I'll pull out more of the jasmine later (as I do every year), and as temperatures warm this spring, I'm hopeful native wildflower seed previously scattered will germinate, flourish, and bloom, attracting appreciative glances and pollinators both.

I work hard to support the plants growing here and even with species that are easily propagated I do not take the removal of an established native lightly. That said, at times the best addition made to a garden space can actually be a subtraction.

It is hard to remove a plant sometimes even when you know it is for the best. I like the result a lot. It does feel more balanced.

Debra: Thanks for saying so. With these wider shots it takes a lot of placement descriptors to point out the particulars. You are a most patient reader, and I appreciate that. I'm betting patience explains some of your gardening success stories as well.

Gardening success. I have HEARD about that hahaha

We've all heard the stories....

Gardens - and gardeners - evolve. Much as I try to combat it, I have the orientation of a collector and, when I see a plant I must have, I buy it and figure out its placement later. (I'm stuggling with the placement of a Myrtus communis as I write.) I also accept plants from friends that I have no obvious use for. And, over time, even if the initial placement works, something else changes nearby and it starts a domino effect. Sometimes a plant just has to go. Were you able to find another home for it?

It's interesting (and annoying) when you plant something that you REALLY want only to realize at a later date that it just doesn't work. GRRRRR. But sometimes the gardener has to practice a little tough garden love. You did, and it was for the best. The result is a more balanced, harmonious look.

Additionally, you'll have more for the critters and that's always a good thing.

Kris: Your struggle to find a place for everything is a familiar one. I've never turned away a passalong plant willingly. It has only been the past year or two that I've moved away from a collector mindset more towards a wildlife support mindset. The two require different patterns of practice, naturally.

With the opuntia I confess I didn't even consider finding it another spot. They grow quickly and reliably from a single pad - just as this one had originally - so I've got a steady supply. Am I taking them for granted? I hope not!

Tina: At least this was a case of my deciding the plant wasn't working where it was, rather than my buying something I deeply desire only to have it falter and die. (Gopher plant, I'm looking at YOU!)

Maybe I should put up a little sign "Management fully reserves all rights to kill plants. Plants dying without proper consent will be prosecuted to the full extent of the compost heap.".

Often harder to remove something than it is to add it--emotionally and physically.

In our last place, I had some spineless opuntia started from pads from my mother's yard. Was sorry to leave it but no room at the new place...

Thank you for your comment at Hill Country Mysteries. I'd LOVE passalong plants for after-freezetime planting! I'm in Austin weekly, maybe I could visit sometime?

Kathleen: You are wise to understand the limitations of your spaces on the front end of your planting process. I spent years making silly mistakes with plant purchases (and accepting passalongs that didn't work in my space but were irresistibly free). I'm still prone to thinking "hmm OK maybe I could just PRUNE that plant to fit that space..".

Actually removing plants that aren't working is new to me and you are right - it is HARD.

We'll have to get in touch in early March and see what's ready to be dug out and passed along . What a fun prospect!

Sometimes less is more, for sure. Like you, I take Opuntia for granted. I mean, there's a never-ending supply around here. I just yanked a few pads off my wavy one yesterday, and, yes, got a few glochids stuck in my fingers in the process.

Pam: So what is your preferred prickle removal method? Are you a tweezers, duct tape, or white glue advocate? (Chewing gum?). I've tried them all at least once... (Glochnid : ) well played.)

I agree, the space looks better without the cactus. I enjoy seeing before and after pictures. I use duct tape to remove glochids. Not 100%, but it helps. Never heard about using chewing gum.

Michael: Welcome! The chewing gum trick is one I heard about as a young girl but that might have been prank advice. I certainly never tried it - I'm a duct tape gal start to finish.

I'm even happier with that area now some time has passed. I keep postponing starting a new clump where I'd originally planned. Maybe my tendency to pack each bed to the gills is easing up?