A plant too far, or additional subtraction

An alternately entertaining and frustrating aspect of gardening is my relative inability to see in my mind's eye what several year's growth might mean to the overall composition of a bed.  Though I generally have an idea of what I want an area to look like, the steps to take in getting there are often punctuated, if not outright interrupted, by the need for corrective measures.

That's part of the appeal of dish gardens.  They serve as the ideal practice bed in microcosm.  The mistakes I make designing my dish planters are the same ones I make when planting beds.  Only in dish gardens the missteps, if not any easier to see or accept, are at least a lot easier to address.

Case in point?  I have a dish planter that I started out filling with a collection of succulents.  I love me some succulents, but that planter was bor-ing.   We've all seen a thousand of these and even though I like the look, it wasn't what I wanted for this garden in miniature. 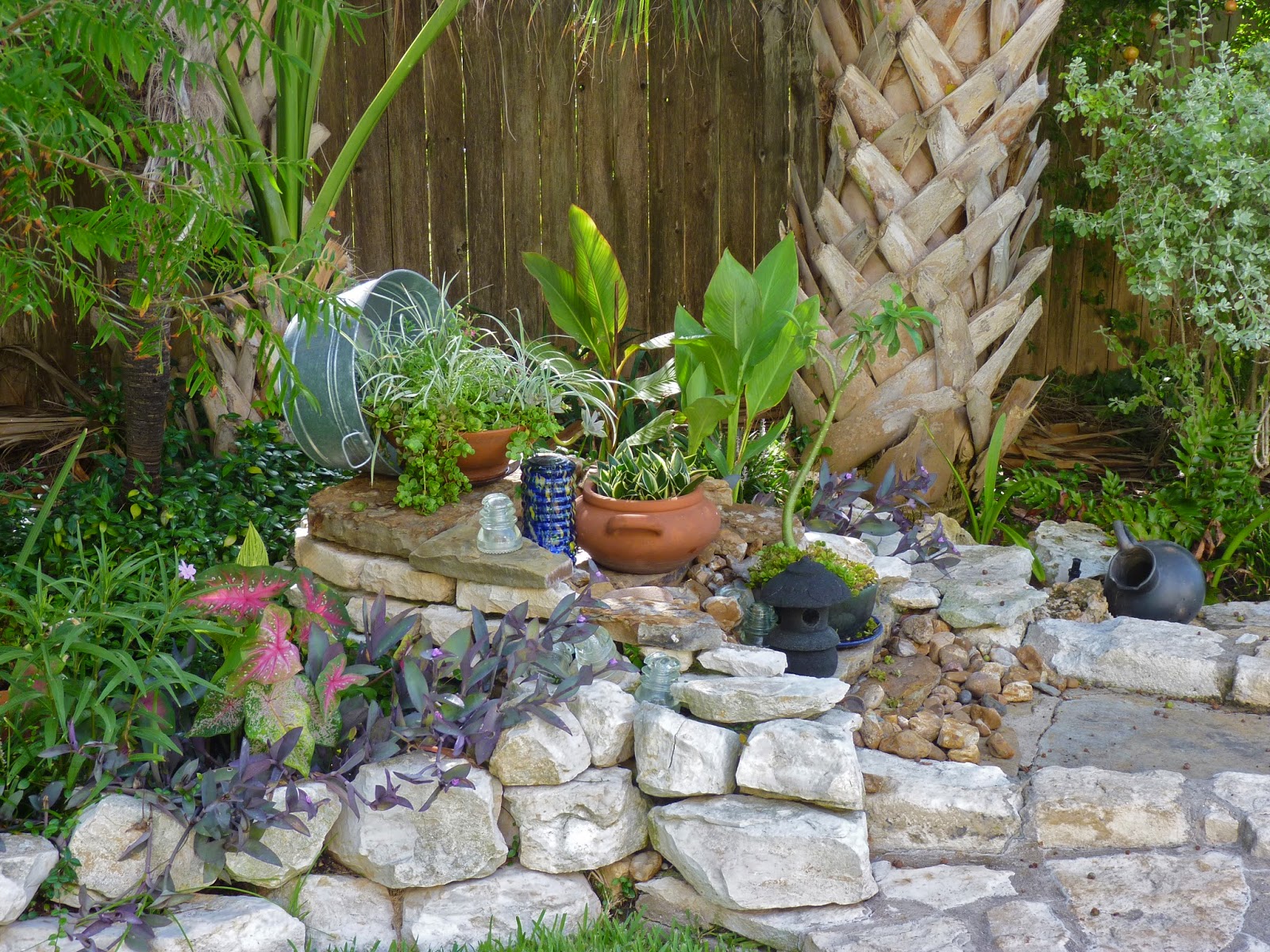 After a few weeks I put in several clumps of Aztec grass thinking the form of the foliage in combination with the variegation would offer a nice contrast. Better! 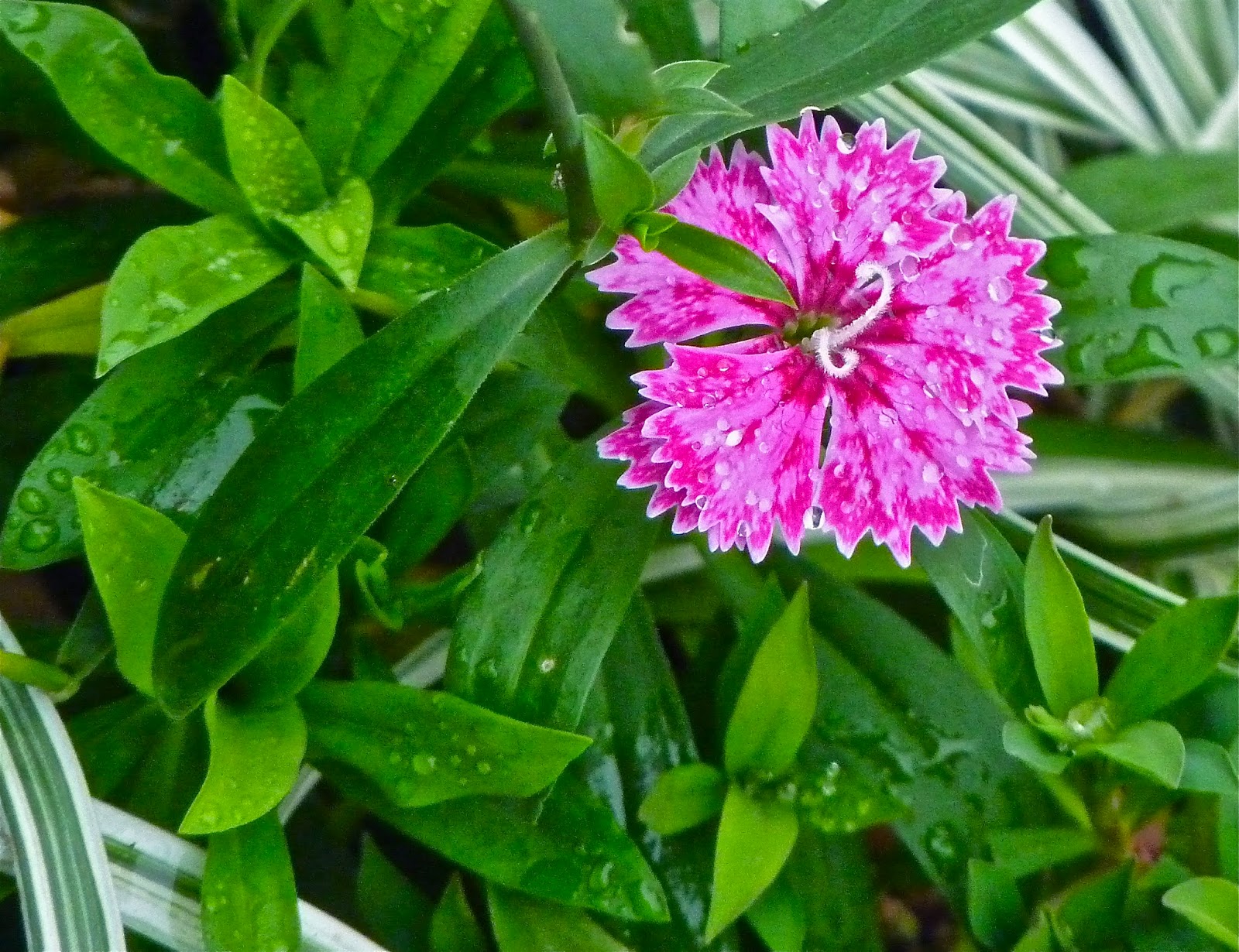 I popped in dianthus for the emerald green foliage and occasional white lined blooms.  Better yet! 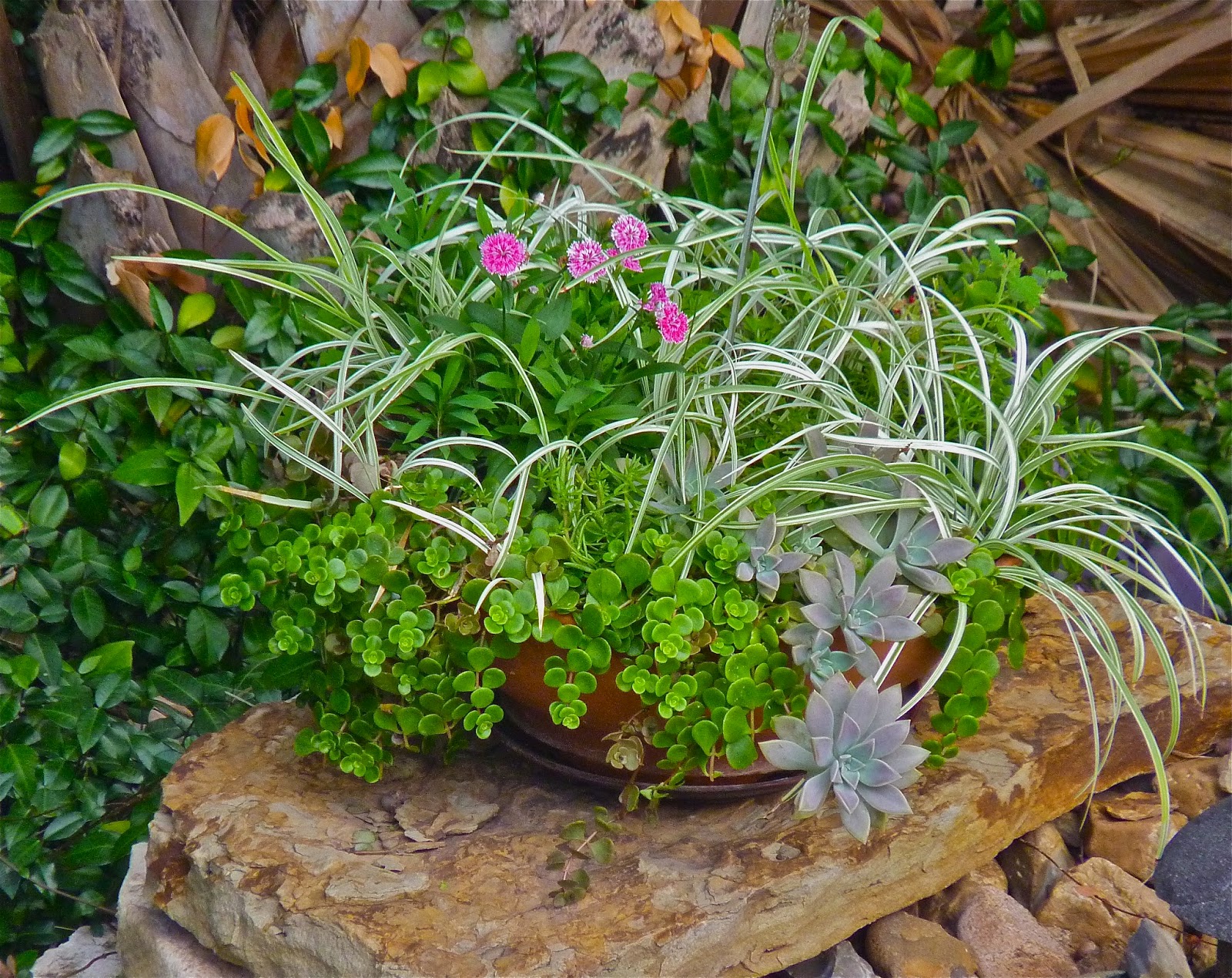 In fact I was pretty well pleased with the whole shebang (and with myself for putting it together) until suddenly...I wasn't.

Something was off.  At first I thought adding the blooming plants had been a misstep, that I should have stuck with foliar interest alone.  But I was in love with those few blooms floating above the rest of the massed plants.  The flower's color found an echo in one of the succulents and I liked that.

Some other element was holding things back from being visually pleasing only I wasn't quite able to put my trowel on what it was.

Cue a lot of standing and staring.  Occasionally accompanied by muttering and glaring. Eventually it came to me.  The Aztec grass.  It spread and spread, the way liriope always wants to do, encircling the planter, throwing up a sheltering mass of white striped leaves as canopy above and around the succulents. When I looked at that bowl, what I now saw was a distracting jumble of criss-crossing white. At the first available opportunity, the Aztec grass had to go. 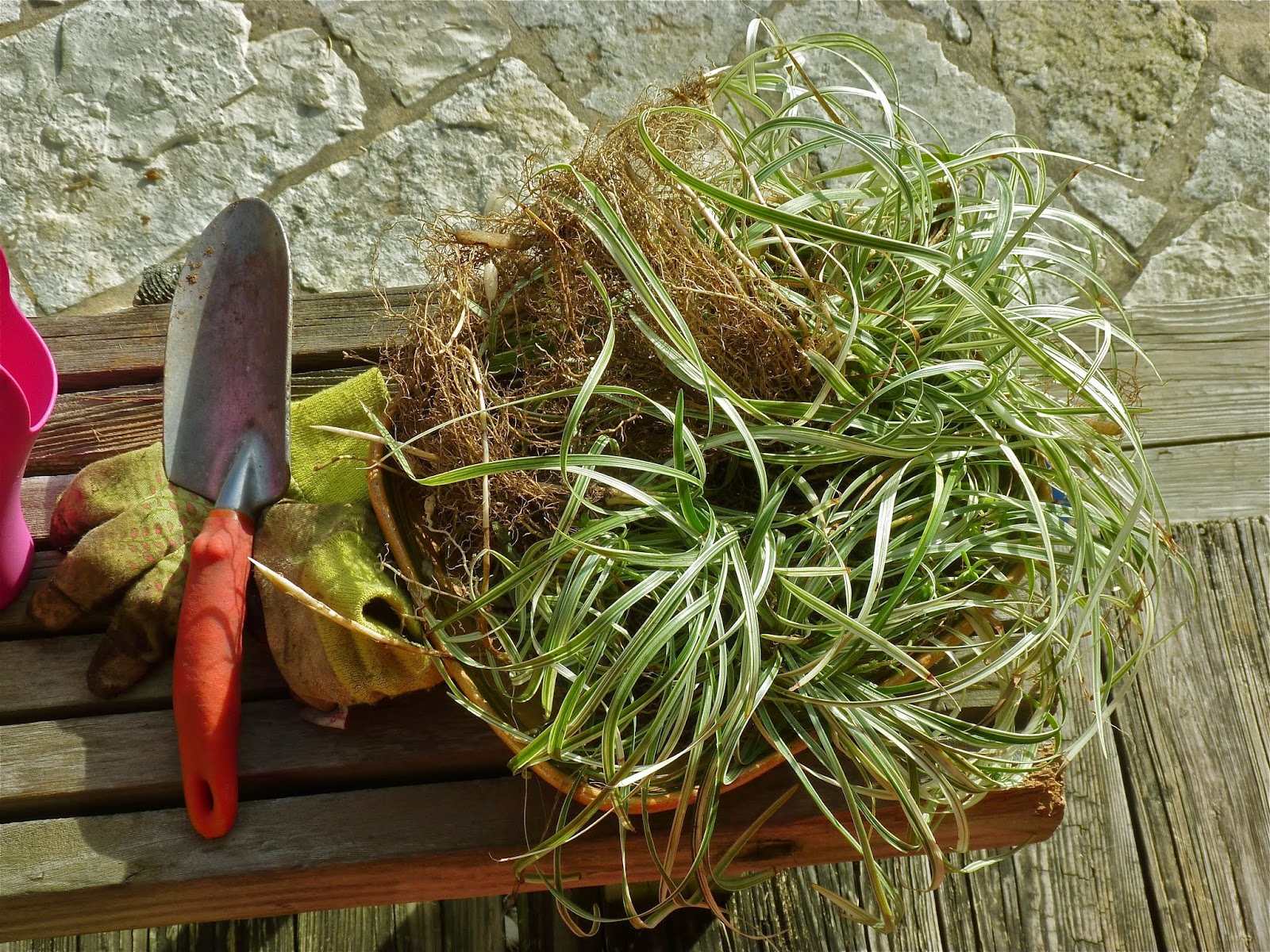 I was in no way prepared for the volume of the grass I removed.  I started out leaving two small clumps remaining in the bowl.  I then spent the next 24 hours fretting and second guessing myself, wondering how long it would take those same two clumps to recolonize the planter. 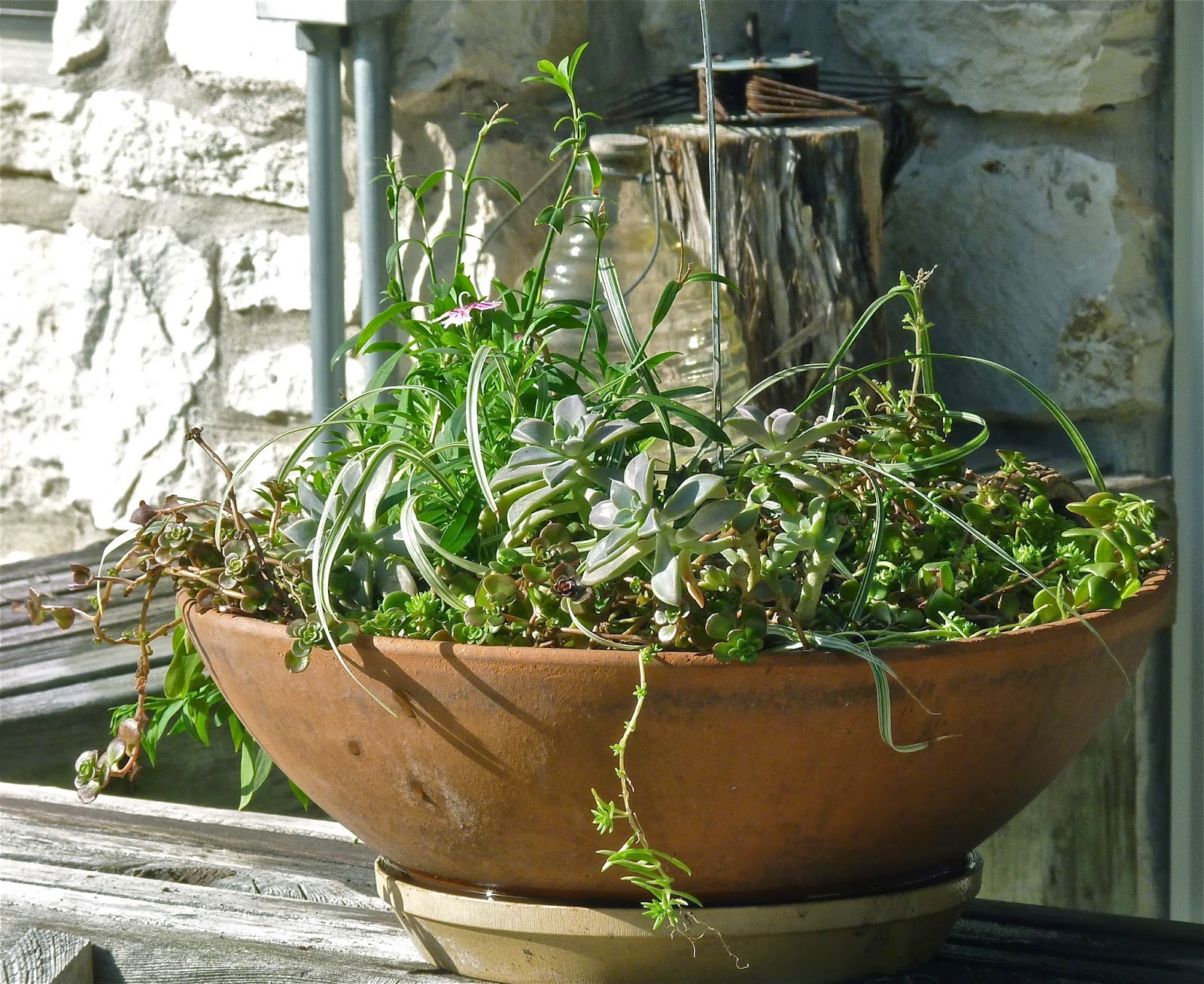 What I wanted was to stop obsessing about and start enjoying this garden again.  So, first thing today I took the remaining sprigs of Aztec grass out.  I then moved them to join the other newly liberated Aztec sprigs where I'd transplanted them yesterday, filling in the edging for an area that is often in deep shade. 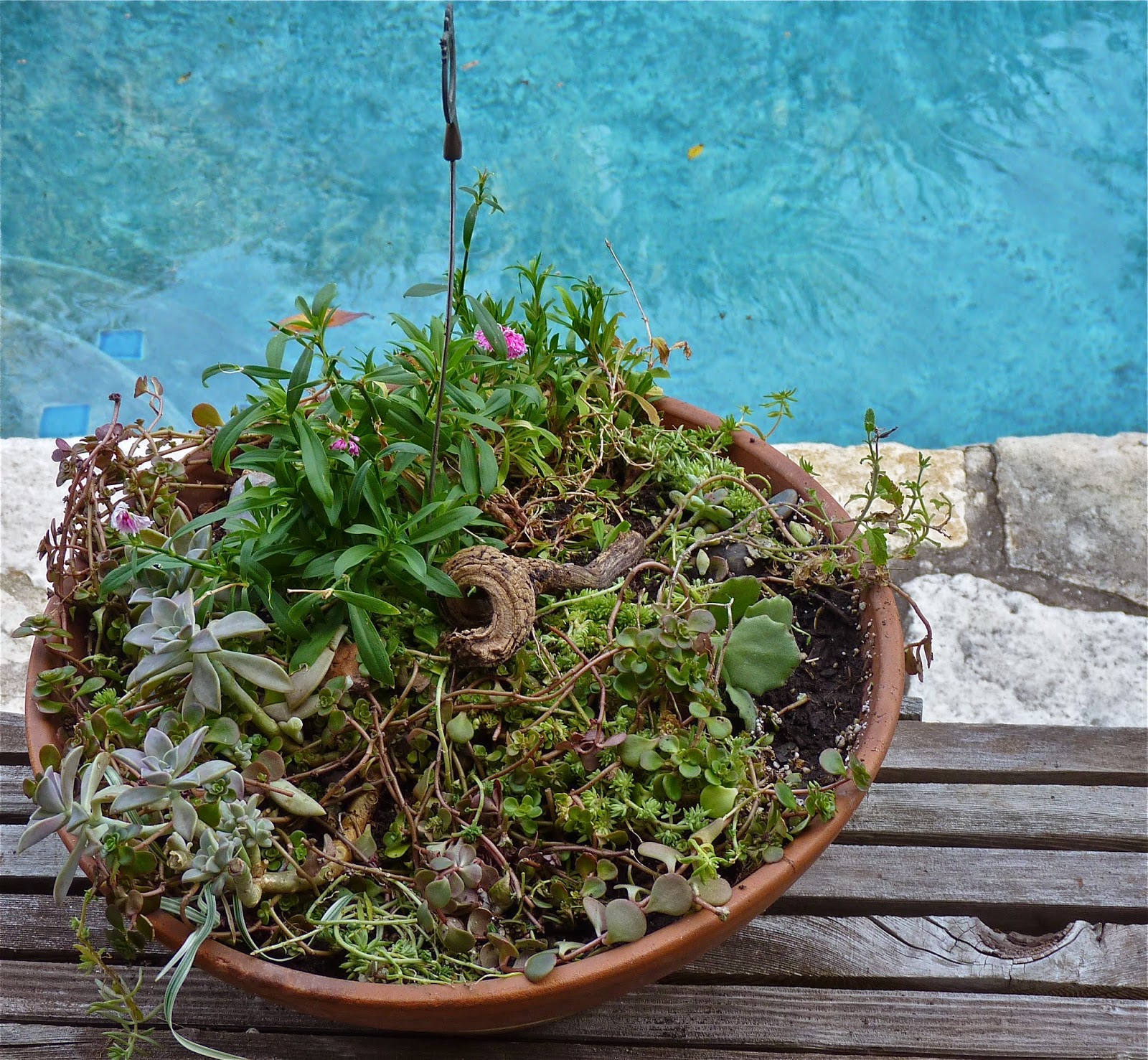 Granted, the bowl looks a bit worse for wear after not one but two sessions of liriope removal.  Towards the end there may have been a certain amount of not-so-gentle yanking involved.  But, with just a little luck and a bit more time, the remaining plants will fill in much more successfully without having to compete with a faster growing grass.

Even slightly tattered, I'm a lot happier with this new clear view of the other plants in play minus the overhanging white stripes.  This planter should stay off the Must-Be-Done list for a long long while.  And after taking out the opuntia, that's twice in one month that a little subtraction has been the best addition to make to my spaces.  It is probably premature to state "lesson, learned!", but I think I'm getting there.

I have little vision when it comes to container gardening, so I'm quite impressed with your work. I like the addition of the dianthus--so cheery and pink!
It's a good gardening lesson though, that less-is-more paradigm--one that I need to utilize more often, in so many places.

Tina: I would gently disagree with your claim to little vision - your spaces with their clever use of companion plantings serves as an ideal I aspire towards.

Actually removing an element (or several) to focus more on greater numbers of a fewer varieties of plants is a new approach for me, but one I'm embracing. The tipping point was learning pollinators prefer plants en masse.

If that is what my little friends want, that's what I'm going to try and give them. If the result is pleasing visually? Double score!

I admire your bravery and 'just do it' attitude! And as a big fan of dianthus I heartily approve of its inclusion anywhere. I really struggle with picturing the final form of a group. It almost never ends up looking the way I imagine it will. Sometimes that is for the best. haha. And taking plants out even when I know it is the right thing to do is something I really need to work on. I think I'm seeing the beginnings of what might be a new trend in container gardening developing. Quite a few blogs have been complaining that the old 'thriller, spiller, filler' thing is a nice rhyme but pretty tough to pull off over an extended period of time. Instead they are planting one type of plant (maybe two) in a pot but they use multiple pots grouped together to create variety. They can be moved around at need and even replaced pretty easily.

Debra: Aw, thank you! I can't speak to trends but I can say that Aztec grass outpaced even the faster growing succulents by a long shot. I needed to take the "filler" nomenclature a little less literally, perhaps?

I am a fan of a pot filled with one type of plant. I like floral arrangements that depend on numbers rather than variety, too. What do you know! For once I'm on trend. I'm going to have to make some hay with this one while it lasts...

I like the pop of pink in with the succulents

I struggle with the editing process too. Although I often start my plans with a vision and good intentions, leaving sufficient room for my plants to fill the allotted space, I frequently fall prey to a desire for instant fullness,leading me to fill in with "temporary" plants. It can get entirely out of control, turning an area into a collection rather than a landscape. After a time, I sometimes can no longer see how to pull the mess together. Right now, I'm seriously considering pulling out much of my back border for a thorough re-do.

Crybrug: Welcome! Thanks for commenting. I always appreciate knowing when somebody has dropped by here.

I adore dianthus. (word nerd warning) Did you know the other common name for these little beauties, "pinks" comes not from the color of the blooms but rather describes the fringed edges of the petals? To "pink" is to create a pattern with cuts or perforations (think pinking shears).

Kris: You put your finger on it - sometimes the best way to fix a problem is to start from scratch.

I find little more discouraging than looking at an area and realizing that some misstep I made years ago has come back to bite me in the posterior. In my case this usually involves what in sports they call an "unforced error". In avionics, it is "pilot error". We need to come up with a snappy term for what to call it when the gardener goofs up, don't you agree?

Everything eventually grows up and some grow up faster than others. You are the smart one to put an end to it. I don't think there is any way out of it but the big make-over. A planter is one problem. How about a large section of the garden? That's on my must do list at the moment. One of the weaknesses of doing my own garden design.
There's always room for a little dianthus in the garden. Such a manageable beauty whatever the weather.

I've given up expecting myself to get it right from my mind's eye. I've got to have props or examples or do like you, trial and error.

The bigger the space, the more the trial.

Look forward to seeing your garden in spring.

RockRose: You have a keen eye for design. Whatever shifts you are contemplating, it is always the gardener's prerogative to change the design of any area deemed no longer serviceable to the desired use or philosophy or microclimate. All of which can change, of course.

In several areas when we removed lawn I planted aggressive plants to hold and build soil until more formalized plantings could be supported. What it took me one season to plant I'm now spending multiple seasons trying to dig back out (and oh, the sweating and swearing!).

Large or small, starting over can be a b*tch!

Kat: Ha! You and me both. I can't wait to see if any of the ideas that I thought I was implementing last year will turn out the way I originally hoped they would (or even come close!).

I suppose that's one reason I usually have several experiments underway - I'm rarely able to predict which ones will work, so I cover my bases when I can.