Once upon a time I managed to successfully transplant a volunteer Prairie flameleaf sumac (Rhus lanceolata) into a lovely blue pot that is one of my most treasured gifts from the Hub.

We moved the sumac here and there over the years, but eventually, as these things happen, it became root bound in the pot and began to suffer for it.  Last year the leaves didn't turn any color other than brown.  This year it began to look positively terminal.

"We'll need to get that sumac out of the pot if it is going to survive" said the Hub.

(He says "we" all the time but we both knew he meant me.)

I went out and gave the sumac a bit of a tug to see how tightly wedged into the pot it was.  It didn't budge.  I reported back in.

The Hub opined "Yeah, I'm pretty sure you won't be able to get that out without breaking the planter to do it."

I'm not sure if he said this purposefully - we've been married over thirty years and the man knows me pretty durned well.  Because he could have fallen on bended knee and begged me not to destroy this symbol of our undying love and that argument would not have gotten me any more dead set on removing the sumac tree without breaking the pot than simply telling me he was pretty sure it couldn't be done

I'll spare you the excruciating details - the scene of the extrication was startling enough the Hub came hauling into the house to ask me if I had seen....?  Did I know what happened there?

I had.  I did.  The important point to focus on was that I by golly got that sumac OUT of the pot without breaking it and all that remained was to find a spot where I might be able to wrestle an opening out of the rocky ground out front and replant the little treelet where hopefully the roots would get some breathing room and it could return to its former glory.

Naturally we couldn't agree on a spot.  We couldn't even agree which side of the house was best.

I was determined to plant the sumac out front to provide some screening between our front porch where I love to hang with a glass of wine evenings and the view across the way.  My current vista consists of a monoculture zoysia lawn and a construction site.

The Hub felt just as strongly we (again with the "we") should plant the sumac out back.  He's sure the deer will browse it to the ground.  He says he remembers us moving the sumac out back after just such a deer assault years ago.
He may be right.  I just know he left it up to me and I put it in the only spot out front I could dig a hole deep enough to even pretend it might make the transition.  Time will tell (though I'll be the one to blog about it).

But back to my lovely, rescued blue pot.  It was tantalizingly empty.  I spent several days with it sitting out front where I was pretty sure I wanted to position it, trying to decide what to place inside.

A lightbulb went off.  I'd recently re-read an old "how I did it" post from Central Texas garden design star Pam Penick on her Digging blog that outlined how to make a necklace of sorts for a pot.  I didn't have any shards or broken china to employ but I sure enough had a load of leftover glass beads from a different project abandoned years ago. 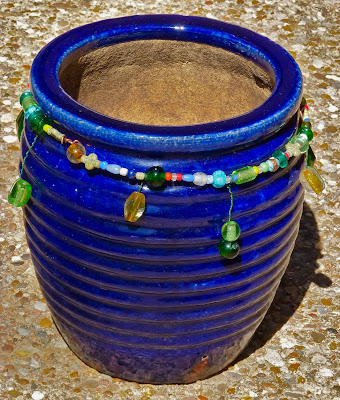 The directions were easy - you take copper wire, string that with beads, then suspend your hanging pieces with additional wire.  I was done in a couple of hours.  Now I could show the Hub how useful my tendency to save e-ver-y-thing is and put a little pizazz on my gorgeous blue pot at the same time.  Double score!

Borrowing a second idea from Margaret Roach, east coast garden blogger extraordinaire at A Way to Garden, I filled the bottom third of the pot with rolled bubble wrap (I kept it on its side to assure drainage) then filled the rest with soil.  This keeps the pot light weight enough to move easily and saves on precious soil. 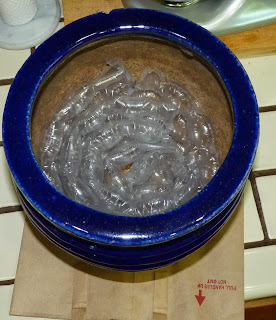 I transplanted in a struggling mealy blue sage (Salvia farinacea) that wasn't getting enough sunlight at ground level.  I propped the whole shooting match up further on two limestone blocks to catch additional hours of sunlight, and et, voila!  A new lease on life for the blue pot and the blue sage. 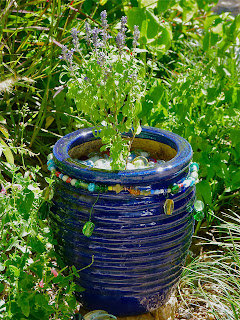 I'm chalking this up as a win all the way around.  Whether or not the sumac makes it through the winter, it has already provided us with years of enjoyment.  My beloved blue pot survived the removal, I was finally able to put some lovely glass beads into play and the mealy blue sage will hopefully thrive in it's newly elevated perch with access to more hours of sunlight.

A lot of our work in the garden is all about hard labor spent in hopes of future outcomes.  After a couple of weeks spent pushing back invasive ground covers and pulling out Bermuda grass, the immediate gratification of this little project was just the right antidote.

As I finished reading the post, congratulations all round on a win-win-win, I was still thinking about the first sentence. You must be a magician to have rescued and kept alive, in a pot no less, a flameleaf sumac all these years.

Hub is right about the deer and the sumac. Better fence it before nightfall. You can also try spraying with Bobbex-R (the R stands for rabbit and the formulation is 3X stronger than the deer formulation, which spells don't get it on any clothes you want to keep).

The pot is even more gorgeous now than before.

Your pot necklace is a perfect accent! I got that idea from Debra Lee Baldwin and made a pot necklace of my own probably 10 years ago. It still looks good all these years later. Enjoy yours!

Kat: Thank you! I realize you've been forced to become an expert on deer (and their damage). While I don't have a way to fence in the sumac at the moment we are not on their current browse route. I may have a few days to figure this out.

And thanks - I am pretty pleased with how that pot turned out!

Pam: I'm happy to hear your pot necklace is still going strong a decade later. When it comes to good ideas in the garden (or on the garden pot as this case may be) they are often timeless. Many thanks to you (and DLB!) for sharing the idea and the how-to.

It seems one of the things I keep learning about gardening is how much I don't yet know! I am deeply grateful for and lean heavily upon on the generosity of others to lead the way. Your blog is consistently entertaining and instructive and I always feel my time there is well spent.

How accomplished you must feel! We have a stand of flameleaf sumac in the greenbelt behind our fence and I just noticed their berries. Hopefully they'll put on some nice color with the recent rains. Hope yours makes it and brings you many more years of joy. Cute pot necklace too :)

Thank you Cat! I'll feel a lot more accomplished if the sumac survives the winter. I dug the biggest and best hole I could, but the area where it now lives is not particularly hospitable.

That said? The pot necklace did turn out well, didn't it?
I may have to rest on that laurel alone.