Kale is certainly having its 15 seconds of fame isn't it?

Kale, aside from being touted as a superfood, is a reliable garden standby in so many zones it seems to be popping up everywhere.  Food blogs, garden blogs, nutrition articles, lists of healthy foods....  It is ubiquitous.

Before it became the most popular kid in the vegetable class, I'd planted kale in stabs we made at a vegetable garden.  Unfortunately we never mustered enough shared enthusiasm for kale to justify the expense of keeping it watered. Nope.  Kale, even in the highly touted chip form, never found more than one fan in the family.
Readily available in local grocery stores and farmer's markets, kale for us is simply one of those easy to grow but not so easy to palatably prepare vegetables that is best relegated to the "I'll buy it when I need it" category. When I needed it was just about...never.

The Hub's reaction summed it up nicely when I proposed trying a salad recipe I'd saved.

Me:  (brightly) Hey honey - how'd you like a superfood salad with dinner sometime this week?
The Hub:  (suspiciously) What superfood?
Me:  (mumbling) kale
The Hub:  What??
Me:  Kale!
The Hub:  (Long pause.  Grumbling...) I don't know - so many of the superfoods just don't taste very good.

And there you had it.  Embodying our prevalent attitude towards anything with a purported medicinal or healthy aspect, ("if it is good for me it has to taste bad"),  kale had fallen into the nutritious-not-delicious abyss, taking its place alongside fish oil, eggplant, and the peels of various fruit and vegetables.


Not wanting to admit to the Hub I'd already bought ingredients, I pressed on.

Keeping my tone light, I offered this was an experiment with no potential blowback.  He likes it, great, he hates it, no harm done. I pledged not to take his reaction personally, whatever it was.  I stated in so many words up front, "This is not a hidden relationship test - if you don't like it I will not get mad and/or hold it against you."

(Why should I need to make such a promise?  You figure it out.)

I rushed to further reassure the Hub this particular kale salad specifically was going to taste good due to the inclusion of recently banished-from-our-premises carbohydrates called for in the recipe.  "Just imagine!" I told him, "it has nuts in it and golden raisins and bread crumbs!  Those carbs are going to hit your palate like dessert!".

And so we boldly went.

Side rant here.  It annoys me no end when I run up against recipe comments on a food blog that praise or condemn a recipe when it becomes clear on reading that the commenter didn't actually come anywhere close to following the recipe itself.  "I tried this for dinner last night but didn't have a pork roast so I substituted ground turkey and instead of chicken broth I used almond milk and I don't have a slow cooker so I used my electric skillet and I subbed in bell pepper because I didn't have any garlic on hand and I thought it turned out dry and sort of bland, so I'm only going to give it two stars!"

Honestly, people.  If you don't bother to follow the recipe you can't really comment ON the recipe, now can you?

So let me say this about that.  This kale salad (what I kept referring to as a "gateway salad" in my head) we ended up with did not precisely replicate the posted recipe though I state with no embarrassment that my substitutions and alterations stuck very closely to the spirit if not the letter of the original.

Instance the first: I could only find finely grated pecorino.  My cheese was not amusingly nubbly like the recipe's author's was but it was pecorino and I submit the flavor was there.  Only the texture was different.

Also?  I did what I always do and substituted roasted Texas pecans in place of the toasted walnuts called for.  This is a salad, not a cake, so a toasted nut is a toasted nut.  I like my salads the way I like my bars and my garden beds - filled with locals when I can get them.  No apologies or excuses there. 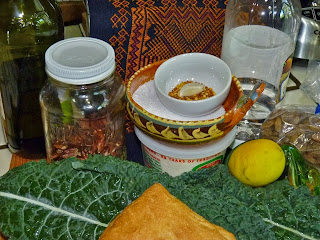 The final deviation?  I can't recall ever seeing how many servings the online version of this recipe states might result from following the directions.  I can recall quite clearly that after I chiffonaded up my first bundle of lacinato kale (which weighed in around 6 ounces, or roughly half what the recipe calls for) I could tell I already had gracious plenty kale ribbonets for the two adults who were the subjects of this mad experiment.

I decided then and there that if that meant I had twice as many carbohydratically delightful plumped golden raisins, pan toasted garlicky bread crumbs and chopped roasted pecan bits, then so be it.  Did I use the full amount of finely ground pecorino cheese?  No I did not.  I halved that and tasted.  Half was juuuust right.  Don't want to get carried away with all this doubling stuff, yes?  Certainment. 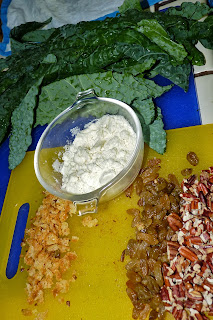 OK.  After all this folderol and fiddle dee dee you may be wondering how it all came together.  I must say that under these elevatedly dressed  circumstances the salad was quite enthusiastically received.  I would not dare to prepare it with a reduced level of carb goodies for at least three to four more tries, until the very idea of kale ribbons as salad greens ceased to provoke the slightest shudder.  This is to be a gateway salad after all, not a palate trial by super food. 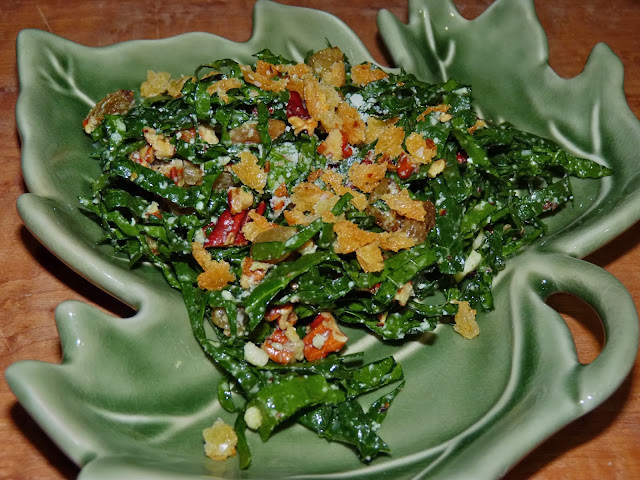 Here's a link to the original recipe for Kale Salad with Pecorino and Walnuts on the ever delightful food blog, Smitten Kitchen.  Perhaps you already like kale and know that about yourself and won't feel the need to bump up the funsies parts as I ended up doing.   Perhaps like some of the rest of us all you need is a little coaxing and in that case, please go read about the salad and see if you aren't at least tempted to give it a try.  I know I feel just that much more virtuous today, now that I've got the first kale salad under my belt.

Are you a kale fan?  If so do you have some other "meh" ingredient that everybody else simply can't get enough of?  I'll confess - aside from the pickled ones - I am apparently the last person in the free world having a hard time warming up to beets.  I know I must be crazy because there are beets on offer in restaurants, delis and in recipes everywhere these days.  And maybe that's just it.  Like this kale salad, perhaps I just need to find the right recipe to educate my taste buds.  Anybody got one of those?  I'm all ears.