I'm a great fan of parsley these days.

I didn't used to think that way.  Parsley was represented in my thinking only as that annoying garnish found on every plate in every sit down restaurant.  If I bothered touching it at all, it was only to find some unobtrusive placement of the parsley away from my food, so I could concentrate on what I was eating.  And, whatever I was eating that day, parsley sure wasn't it.

Then I planted some in the garden to share with our son (he's a chef).  He doesn't have access to outdoor planting spaces, so it was easy enough to offer to grow it here.  He can drop by and pick however much he wants for his own use at home.  We were already co-hosting basil, thyme and jalapeño plants for our mutual use, so what was a little parsley between family?

It turns out parsley, once a good sized crown is established, is a really attractive plant. It is as green as they get, barely wilts in the heat, tolerates most of what any Austin winter dishes out, and is never a water hog. Even in August.

As I began to use fresh-from-the-garden parsley in various recipes (rather than ignoring it as an ingredient altogether), I began to discover parsley does indeed have something to offer as part of the flavor profile of various dishes.  Fresh parsley is an addition I have come to appreciate, especially in home preparation of ranch dressing and chicken stock.

And, as is typically the case, I am not alone in my admiration.  Yesterday as I was trimming out the yellowed leaves from underneath the crown, I ran across three fellow parsley fans. 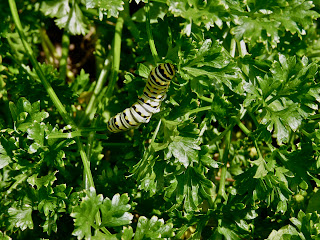 Papilio polyxenes, also known as black swallowtail caterpillars, were busily eating, bulking up for their pupation.

In years past I'd admired these stylish guys  feasting on well established fennel plants.  It turns out these caterpillars are particular fans of the carrot family, laying eggs on dill, fennel, and.....yup, parsley. 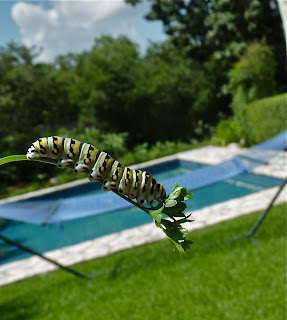 I was growing the parsley to share after all but we have loads of fennel and not so much parsley.  I decided to try to carefully move the feasting cats from one preferred plant to another.

As gentle as I tried to be, I did not get away with my transfer efforts without alarming the caterpillars enough to provoke the evertion of a forked gland called an osmeterium, which supposedly emits a foul smell to put off predators. 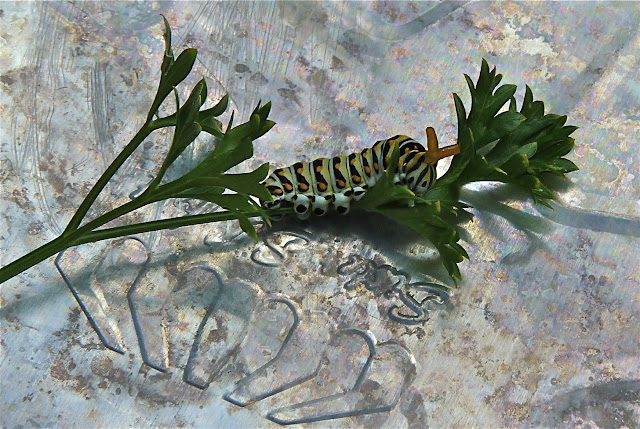 Ha!  Though I am no predator, when it comes to tolerating foul smells?  Caterpillars, if they could google humans, would soon come to understand no woman who has been involved in the care and laundry of a teenaged male, will be easily shoved aside by foul smells.

Even though I may be periodically deluded into thinking I am out working in our beds alone?  The garden is always an occupied space.  What is food for us is always also food for others.  Sharing the bounty is simply par for the course.

I feel a bit like you, concerning the eating of parsley (for myself), but I've grown it for the swallowtails. Interesting that you find it more tolerant of the heat than fennel, which does better for me (and therefore, the caterpillars), than the parsley. Nice photos and good to know what that little 'horn' thing is that the 'pillars stick out when I move them.

Tina - Thanks for dropping by! I'm happy the parsley and fennel we already have are both favorites for the swallowtails. They are so graceful and I always feel fortunate when I share the garden with them.

I had to look up the osmeterium thingie. I was sure it was called something in particular but had no idea what the term was until I checked it out. I'm relieved to know I'm not the only one out there who still has lots to learn.

What a cute post, Deb. I grow fennel and parseley for the butterflies. Haven't experienced parsley joy yet, maybe you'll post a fav recipe?

You're right about flatleaf parsley's endurance. Not only that, it reseeds. I haven't bought parsley in years.

Kat! Hey there lady! How great to see you! I'll keep an eye out for a recipe that might be a good parsley "stepping stone" dish.

I thought I was growing fennel for my family to eat. Turns out the licorice-y flavor is not finding many fans inside the house anyway. Now I simply enjoy the lacy leaves, the gorgeous blooms and the butterflies it pulls in.