Did I really buy these "chips" just because of their ingredient list? 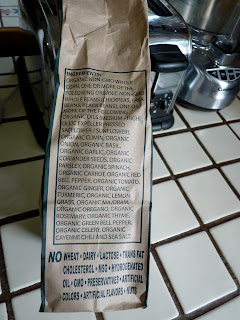 Maybe....  I mean, just look at it!  Have you ever seen anything more earnest than this? 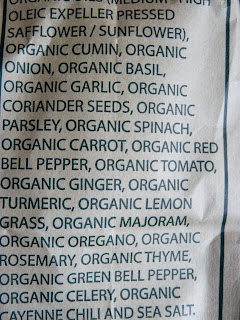 I'll admit it - when I spotted these in the store I laughed out loud a little. 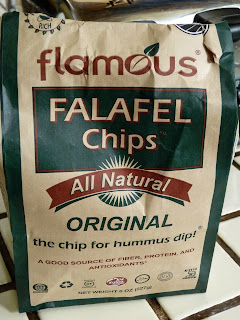 I simply had to buy a bag if only to encourage such a commercial effort.

Unfortunately, the texture was too thick for 3 out of 3 local tasters and the flavor was a bit bean forward for me.  That was a stand alone taste test, I'll try them with hummus as suggested and see if the combination  is a winning one.  (I don't think hummus atop the platform will do the work that is needed to be done, but will be quick to update if I'm wrong.)

I think part of the problem is their nomenclature.  I read "chip" as a descriptor and think "thin and crisp".  These are neither.  They aren't exactly flaky like a cracker either.  These Falafel chips are actually a lot closer to a fried corn tortilla in texture and crunch.

So, yeah.  I bought these for the concept and will probably end up putting them out on the feeder designated for our resident evil zombie squirrels.

They'll have to bring their own hummus, though.
Posted by TexasDeb at 6:30 AM