Shhhhhhh..........  This is all very hush-hush.  Super top secret.  I know you won't tell anybody what you are about to read, because it would spoil the surprise, but I have come up with absolutely, positively the P E R F E C T basket ingredient list to stump the most resourceful chefs on the Food Network cooking/reality show, CHOPPED.

If you have never watched the show, 4 chefs show up and cook a series of dishes based upon 4 ingredients provided in 4 identical baskets.  Each round the chef responsible for the least successful dish is chopped/sent home, until after the dessert round when a winner for the day is announced.

What makes this show slightly different from other televised "chefs judge other chefs" challenges is the quirky combination of ingredients on offer in each round's basket.

There is typically something unusual on offer which must be used in some way, no matter how superficially inappropriate it might seem for a particular course, or in combination with the other ingredients in the basket.  It might be a really obscure ingredient, such as lime pickle, or simply something that works against expectations for a course, like fruit ring cereal in the appetizer round.

If you are a fan of the show (we are), and have ever found yourself wondering aloud "so, what WOULD I prepare out of a basket containing haddock, garlic scapes, matzoh crackers and blueberry gummy bears?" then read on....

Some of the best CHOPPED episodes have themes, and "my" episode would be one of those.  It would be called something along the lines of "Home Groan", and each basket would feature a typical day's harvest from our garden.

That's right.  Our garden.  That will be all the hook needed, because, look at this y'all: 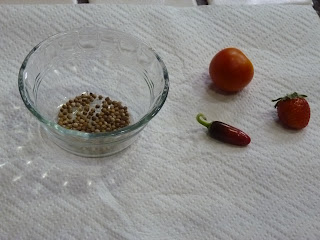 What you are seeing is the representative bounty of a day in the life of our garden this year.  Stunning, isn't it?  Can't you just hear CHOPPED host Ted Allen describing the contents?  "Chefs, in your baskets today you will find; a strawberry, a cherry tomato, a serrano pepper, and (insert dramatic pause here)........coriander seeds!".

I don't care what sort of pantry hookup you've got or culinary training either one, try making anything at all out of this motley assortment, other than a slightly bent plate garnish.  No, I'll wait.  Go ahead...try!

Or in other words, face the precise challenge every person cooking for a household does every evening when it comes time to prepare dinner.  Because reality television is only the faintest echo of reality in this instance.

Every night there are folks looking at what they've gotten from their gardens in combination with what's already on hand and then making something great out to eat out of that all as quickly as can be done, to be consumed/judged by a panel of instant critics (aka their family).   They do it day in and day out, with no camera time, no prizes to be awarded, and little to no acclaim even when they get it right.

If their judges don't approve, these chefs don't get thrown out, but rather are brought back in less than a day's span to take a deep breath and try it all over again.   It may seem a kinder process but honestly, there are days when I wished I could be chopped and sent off to pack my knives and go.  Instead I head straight into syndication, with the inevitable boredom that re-runs inspire.
Posted by TexasDeb at 6:30 AM

We love "Chopped", too. And for those of us trying to eat seasonally and grow SOME of our own food, it really does end up as sort of a "Chopped" episode. You're so clever to have made that connection!

Thanks, Iris. I'm glad you see the connection.

The squirrels are finally leaving the tomatoes alone (since I'm stuffing them at their own feeder now) so if the weather will cooperate we MIGHT have enough fruit at one time to compose an entire serving. Maybe.....