Perhaps you know the axiom - You can never be too rich or too thin.

Due to my hoardist tendencies, most of the time around here that saying ends up reconfigured into some version of "You can never have too many....." fill-in-the-blank with whatever it is I am attempting to defend having many-more-than-one-of at the time.

I'll start with our version of hoarder's Switzerland - a group I have yet been called upon to defend.  Bird feeders.  Who doesn't love birds?  We sure does do!  We have five bird feeders of various types in various spots along with all sorts of plants growing that support berries and seeds various species like to visit in season. 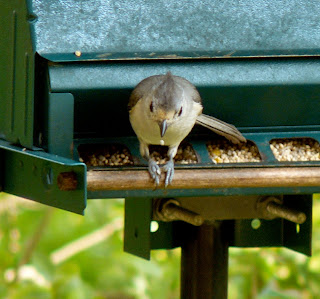 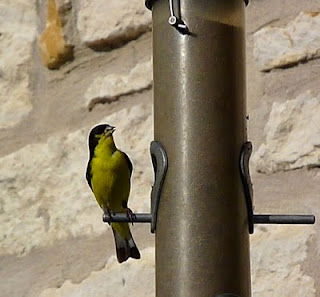 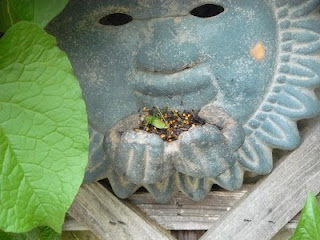 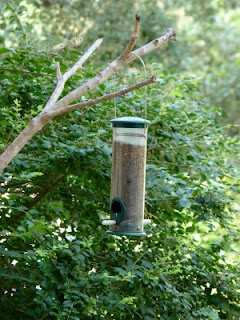 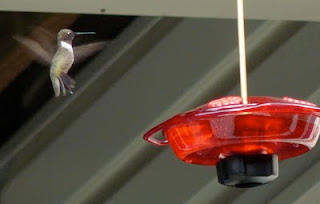 No problems so far.  However....  For various reasons we are heading into a period requiring quite a bit of deck clearing around here which has put a very large smile on Hub's face. At the prospect of my finally getting rid of all sorts of supplies clutter he can barely contain his glee.  To his way of thinking, Less is not only More, Less is BETTER.  Much, MUCH better.

My completely rational response to the idea of getting rid of m/any of my treasures (once my head stopped swimming and I could hear again over the pounding of my pulse in my ears) was to immediately begin defending in my head some of what might (and I cannot emphasize this too strongly) MIGHT appear to the uninitiated as exemplars of excess.

I started snapping photos resulting in a sort of primer of plenitude.  Here, in no particular order,  a tip of the iceberg look at a few things I believe I can never have "too many" of.... 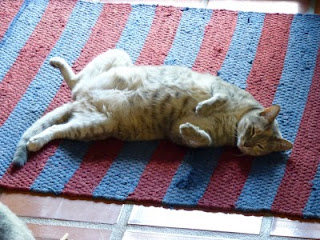 A note of clarification.  Nobody is talking about getting rid of our cats, or any of the flowers in the garden beds. Certainly not the tomato plants now they are finally showing signs of recognizing what they are and behaving accordingly.  These all simply caught my eye as I was wandering around thinking to myself - "what can I never, ever have too many of?".

My list could go on indefinitely (kinds of mustard... mismatched wine glasses...) hence the happy anticipation on the part of certain people around here who would gratefully see more actual space in our places.

What about you?  Are there objects/comestibles you adore in profusion?  No need to defend your choice(s), we're all friendly 'round these parts.  It is time to rally, fellow hoarders and hoardettes - speak up and tell the world!  What can YOU never have too many of?
Posted by TexasDeb at 11:24 AM

mail and hugs and smiles... harharhar

Thanks for playing along PPastry. I hope you are never in short supply of anything on your list!

Your pictures are amazing, Debbie. I am sad to say that I am not willing to show what all I have! Judy's always telling me to purge...I'm definitely a work in progress. Kudos to you for tackling it!

Alycia! So good to have you here. If only the photos in this post were all I had to deal with. The corner in the garage wouldn't be fun to look at, I promise! Here's hoping we both can get our acts cleaned up.

There is no such thing as too many bird feeders! Paper drink parasols, however...

I join PP in the cookbooks and raise the ante with wine, jewelry, books, music, photographs, and sunsets.

And I meant to say that I appreciate all your thoughtful comments at Hill Country Mysteries. After we lost Harry, I was topsy turvy for a while but I saw your comments and appreciated your kindness.

KS: Your list is a great one - I've got no quarrel with any of your additions certainly. If I told you all I used the little umbrellas for and why and how it all started I am sure you'd be right on board.

Small white sneaker liners. I counted 72 pairs brand new, and probably the same number that are floating between the washer and the garbage bin. That makes 288 sox, plus the two pairs that I am wearing right now. (My clogs are one size too big, hence two pairs.)

Snapping a hummingbird in mid-hum is a feat. Five feeders is OTT, seeing that I don't even have one. But then, how many trainer liners do you have?

Jo you got me on that one - I "only" have a half dozen pairs of trainer liners as you call 'em. But I feel you on the socks front - I have many many pairs of wool knee socks for when the temperatures finally fall around these parts. Cold feet are not happy feet!

Right now I'm relieved it is hot and I don't have to wear shoes OR socks either one. With this silly ankle still on the mend, sandals are just the ticket.

Thanks for dropping in!