No Lamb Left Behind

I found myself with a gracious amount of braised lamb remaining after we'd had our fill for Christmas Feast 2008.  I'd sent a good helping home with Chef Son and we still had at least four servings.
I also had what eyeballed out to be about two cups of chipotle cheese mashed potatoes on hand from a Christmas Eve Niman Ranch steak dinner.

Throw in a pie crust and I had everything I needed to put together a baked beauty I dubbed Shepherd's Pot Pie.
Not quite a regulation pot pie, not quite a traditional Shepherd's pie, but something somewhere in between.
There isn't a recipe seeing as I simply combined leftovers on hand, but the technique (and that is a very generous application of the term) runs thusly.
Preheat your oven to 400 degrees.  Place pie crust - enough for an 8 inch pie at least - in the bottom of an 8 inch square metal pan.  Arrange so the crust fits evenly in the pan and comes up the sides as far as is possible.
Note:  I used a metal pan because my first thought was to finish the pie up under the broiler to give the potato topping some sort of browning.
Slightly warm and then place the leftover lamb which is still swimming in its braise liquid reduction sauce in the pan on top of the pastry.
Slightly warm and then carefully spoon your chipotle cheese mashed potatoes on top of the lamb.  Gently spread the potatoes out to create a top layer but don't worry about getting the potatoes all the way to each side.
Bake for 20-30 minutes until the pie crust is golden brown and the lamb sauce is bubbling.  This looked great enough and more importantly smelled so good that I didn't even bother with the broiler step.  We were feeling starvish and dug in before I even thought to get a photo.
So I grabbed this quick shot of the leftovers 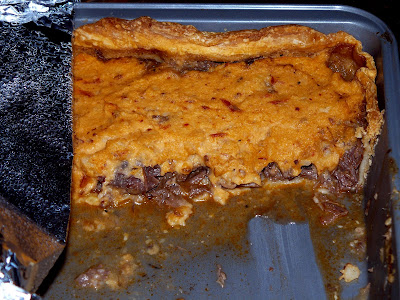 and I have to say, even cold the day after the entire thing is so aromatic I was sorely tempted to try it out as a hearty breakfast food.
I figure to try and throw in some sort of little foil dam when I reheat this to keep the components in place. Moving it all into a smaller loaf pan (plan B) seems to me to run too great a risk of destroying the integrity of the remaining crust.
When all is said and done, who in the world cares if the crust is broken up in the leftover Shepherd's Pot Pie?
*Sigh.*  I do. I care. Inexplicable but true.
Tonight we have a locally raised organic chicken to roast.  Roasting is such a simple preparation but hard to beat.  And again, after we've had our lovely dinner we should still have some amazing leftover chicken to enjoy.  I am figuring on using most of it in chicken enchiladas and making stock out of any bits past that.
Now I need your help. 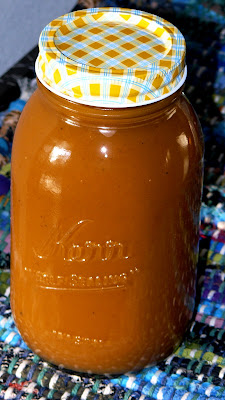 I have a full jar of braising sauce left over from our lamb shanks.  I can't imagine just tossing it out but don't have any specific ideas for what I could do with it.  The lamb meat itself is gonesville.
I could freeze it I suppose, but to do what with, exactly?  Make lamb soup at some point?  Is there any point in trying to freeze it into little cubes of meaty goodness and use those as flavor boosters for future soups and stews?
I also have leftover pot liquor from cooking the ham bone and greens for our feast.  I can't see throwing that out either.  It is just too flavorful.  Aside from cooking a big pot of pinto beans with it I don't have ideas.  I'm pretty sure we wouldn't be able to get a big batch of beans eaten before they'd spoil.  Do cooked pinto beans freeze well?
I don't really want to throw any of this stuff out but don't quite know how to keep it in a way that it will be useful in future.  Any ideas from you foodies out there?  Comment away and give me your ideas on how to use these delectable liquids please!
Posted by TexasDeb at 8:02 AM

Both the sauce and the liquid can be frozen, used, and possibly even re-frozen and used again. The main danger in freezing (and re-freezing) is that ice crystals damage protein (and vegetable) structures and affect texture, etc. and with liquids that really isn't much of an issue. There'd be a little water loss, but that's the worst of it.

here’s wishing you and your family a wonderful 200, dear deb. you could use that jar of goodness to spice up some rice as it's cooking.

Oooh, rice, that would be an amazing use for either or both the liquids. Yum. Thanks Bee - you always have good ideas. For whatever reason seasoning rice had not occurred to me but what a natural, especially for the greens pot liquor.

As to the bathing, well, maybe when it warms up a little? The weather I mean, not the sauce. Not that we aren't bathing this winter...Oh...never mind : ).

Freezing, that will most certainly happen now with your assurances that as long as it doesn't stay in the freezer too long the taste won't disappear. Thanks ChefSon!