You may have read my post a while back about a frozen dinner that was so far off the mark I couldn't finish it.

That, my fellow blogarians, almost never happens. I was raised to be a lifetime member of the "Clean Plate Club" and heard a variation of this gentle warning at the outset of every trip down a buffet or cafeteria line from my Mother. "Don't let your eyes be bigger than your stomach! Be sure you can eat everything on your tray/plate!".

The Could Not Finish It meal was not the same brand as my usual microwavian fare, so today, just for a fun comparison, I threw in one of my go-to frozen "I need something hot to eat now" meals - a Lean Cuisine.

I have long been a Stouffers fan, and I had branched out past my all time reliables to try something new, their Szechuan Shrimp Stir Fry with Pasta. 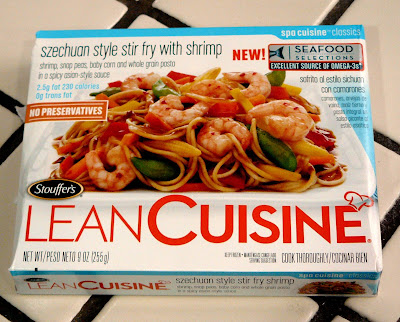 The photo on the package looked good. But those are styled - we all know better than to expect the food inside to look anything like those doctored photos. 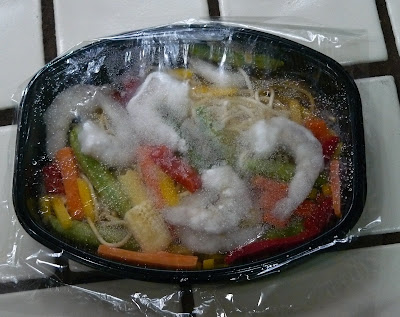 The frozen food inside the package looked good. That is encouraging but we all know how adversely the microwave can affect some foods in order to cook them properly. Shrimp are delicate and overcook in a heartbeat. Would these be edible after the reccommended heating time? 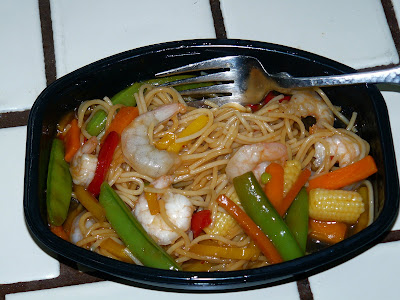 Well fiddle dee dee! The shrimp came out cooked just so, the dish was not mushy, it had just a bit of "zip" to it and my faith in Lean Cuisine was bolstered. Good news there, right?

As I was tossing the box into the trash I noticed something for the first time.

A nest logo. Stouffers has been bought out by Nestlé.

No big deal you say? VERY BIG DEAL says me.

Nestlé is a corporate monster, right up there with Wal-Mart and the other biggie bad boys when it comes to worker's rights. And I am not talking about thugs knocking pamphlets out of worker's hands, although that sort of intimidation is bad enough.

Internationally, Nestlé management has been accused of ties to trade unionist murders.

So yeah. No more Lean Cuisines for me.

And while that could be seen as good news in terms of my being forced to eat fresh food rather than microwaved convenience stuff out of a box, it is sad to me that as these companies get larger and larger, their accountability gets smaller and smaller.

Also, it is sad to me that so many people will blithely continue to buy what is after all a leader in the genre (damned by faint praise sure enough) without a clue that their dollars are supporting at the least a corporate covering up of cold blooded killings. That is what passes for corporate policy abroad.

And finally, it is especially sad because I grew up loving Nestlé chocolate mix and being delighted and enchanted by the little bird in the nest that is their logo.

On Saturday mornings growing up I watched cartoons and I sang the Nestle song over and over with Farfel the Dog. N-E-S-T-L-E-S. Nestlés makes the very best, chooooooooooclate. 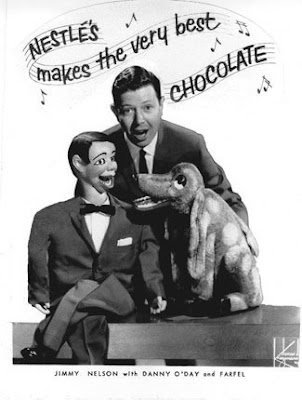 Shame on you Nestlé. You have moved past deliberately marketing nutritionally suspect baby formula to actively supporting those who have been accused of killing labor organizers. And shame on me for not paying enough attention to the Stouffer's packaging to note that Nestlé had bought them out.

From now on I will try to see that not another penny moves out of our food budget into their coffers. I don't knowingly buy food from corporations that condone the murder of trade union activists. Not here and not abroad.

This is why I am careful about my banana purchases, because it is nearly impossible to buy a banana that isn't coming from a company with bloodstains on their hands in Central America.

I've been to Central America and have friends who live in Guatemala. 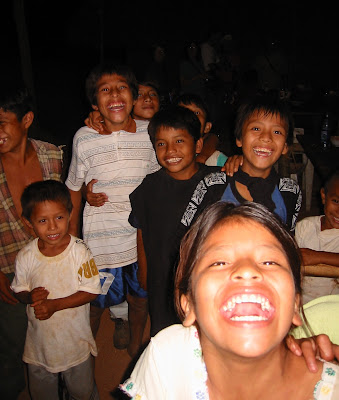 I won't pretend that an inexpensive banana is a good trade for the brutality, often subsidized by the US, the giant fruit companies routinely visit upon the people who live and work there.

I'd like to hear that you all intend to be careful with your money. Every dollar we spend constitutes a moral contract with the folks we are paying. Every family budget, though small, is a moral document. It all adds up. I don't want our family's spending saying things about us and how we view the world that simply aren't true. That wouldn't make for a very Merry Christmas or a Happy New Year.

What say you? What is the bottom line for your purchases? Low price the driving force? Organic? Local? Sustainable? Taste? Where do you draw the line? Weigh in with your comments and let me know if I am singing your song or way off tune to your ears. I'd really like to know.
Posted by TexasDeb at 1:44 PM

Well said, Deb. I try to vote with my dollars everyday. I feel that as a worker at a co-op, I am at the Vanguard of these types issues. I know that when I go out, some of my choices are obscured, but for the most part, my choices of dining establishments echo my consumer choices/righteousness.

2009 will be all about getting back in the kitchen, eating local, organic, sustainable, and ethically treated options. Except for foie gras. I make and exception for foie gras...