Hot but not especially bothered

It took longer than expected this summer, but the temperatures have most definitely eased up into "hot enough for you?" range.  Faced with daily highs in the upper nineties and the occasional foray into triple digits, even established plants begin to look tired, especially those planted in full sun.  It is too late to prune, too early to plant and too hot to weed.  As a result, there's not a lot to post about this time of year.

Nothing much bothers with setting flowers in August under ordinary circumstances, and after our colder than usual winter, a lot of my usual late summer bloomers (most of them non-natives) are running several weeks late. The vast majority of my native plants have bloomed and set seed and are now content to coast and reserve their energies for cooler days to come.  The view outside is set for the season and at the risk of sounding like a piker, things in the garden just now are fairly boring.  That is what makes these exceptions so notable.

Garlic chives have taken advantage of their propagation dominance and are overrunning their bounds.  But.  They bloom in the heat of August, and though the cut stalks smell (and taste) like garlic?  The flowers at least look sweet, a bit like miniature lilies. 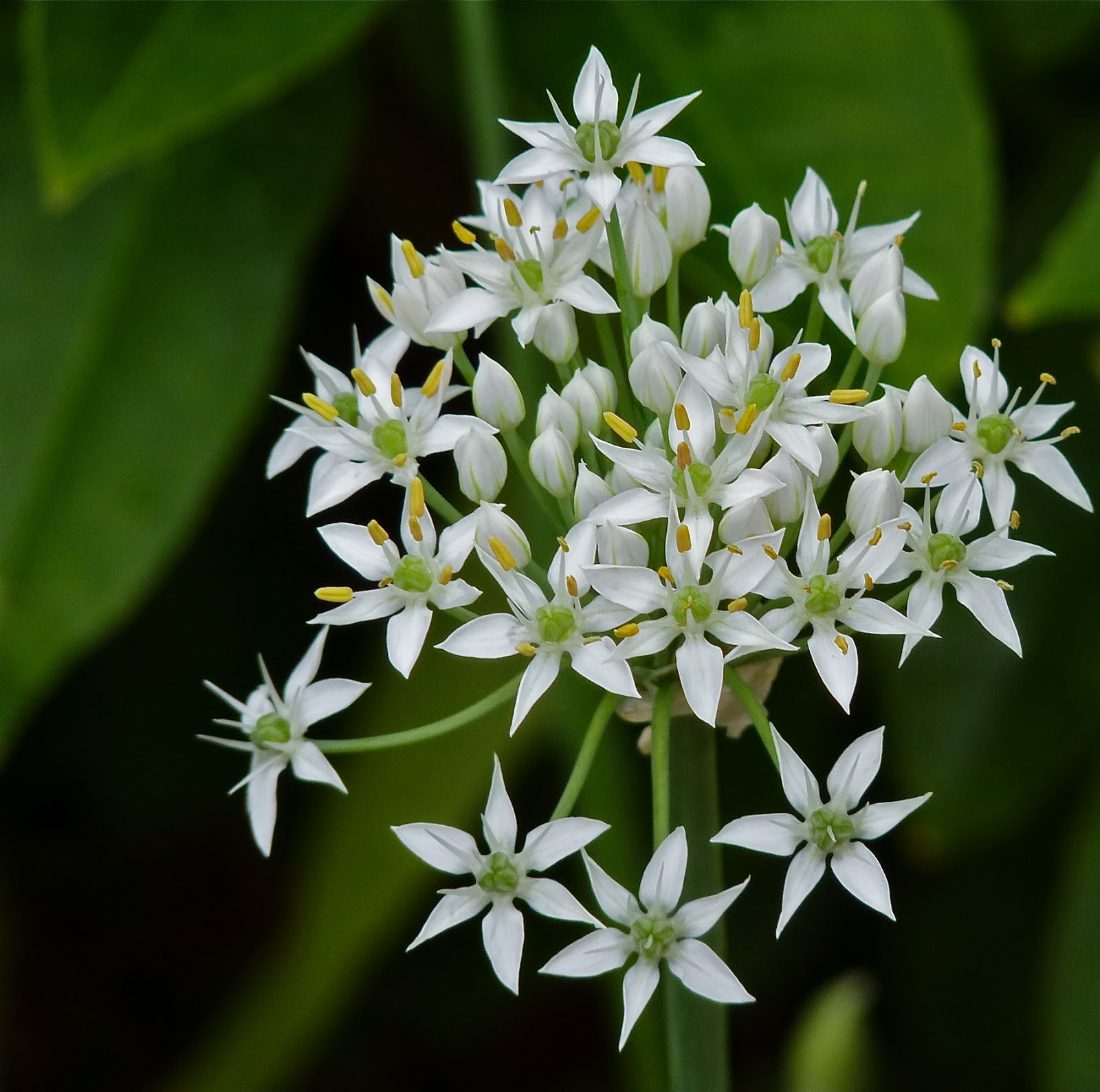 Another bed bully that at least partially redeems itself this time of year is mint.  I harvest a bit of it to use for tea, salads, and sauces, but mostly I appreciate how it holds up in the heat, blooming when little else will.  Bees seem to enjoy the tripartite spears and I can only imagine what a lovely top note that might give the resulting honey.  The white blooms in combination with the bluish green of the leaves and stems are as refreshing to the eyes as they are to the palate. 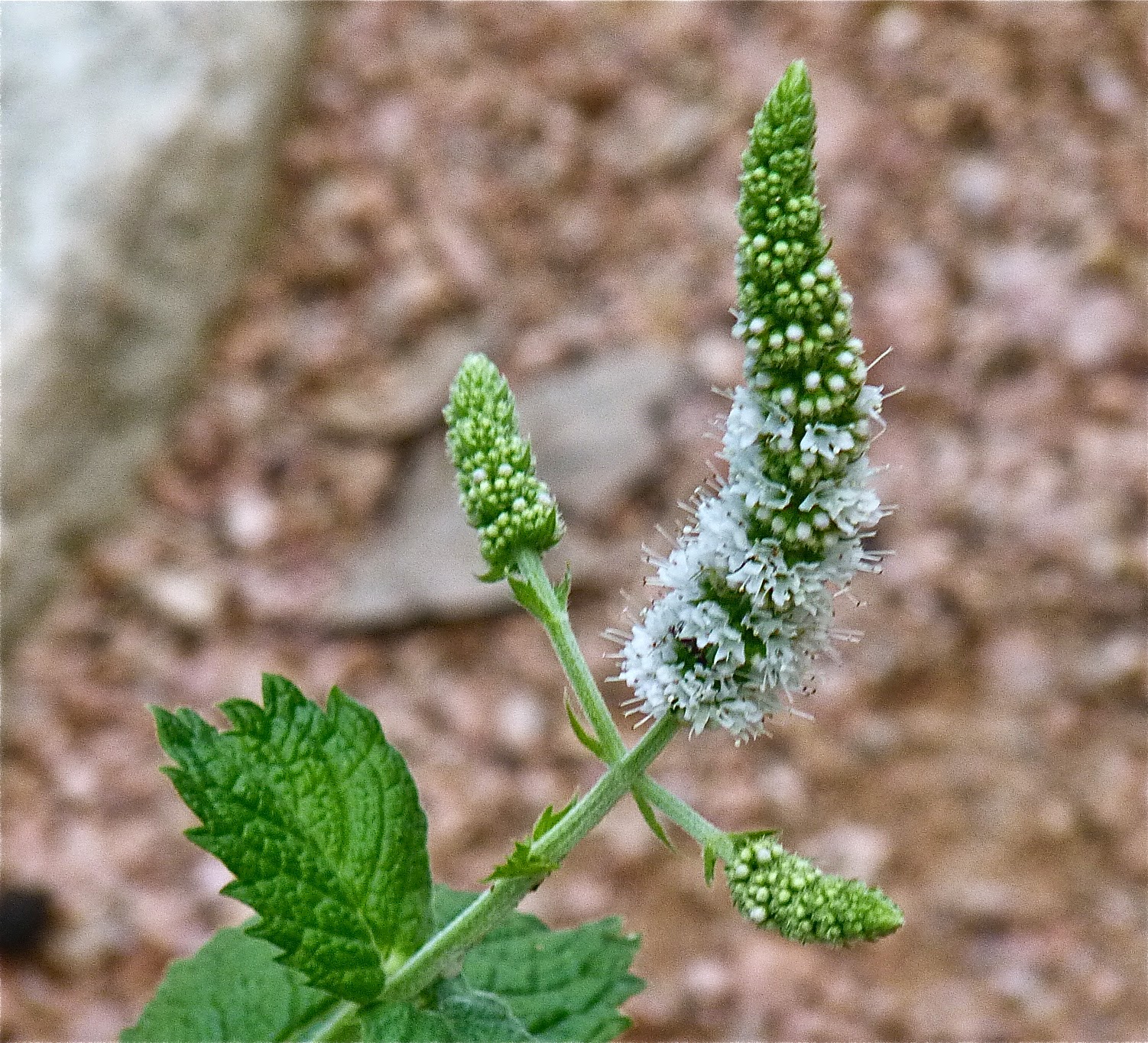 Then there are the annuals, typically much more well mannered. Specifically, the basils.  I cook with them some, but I plant a smattering of these in the garden each year just as much for their contrasting foliage, late summer blooms, and seeds.  Finches love basil and I enjoy watching the tiny birds hanging on to nodding stems as they work to harvest seed.  This year I planted purple, 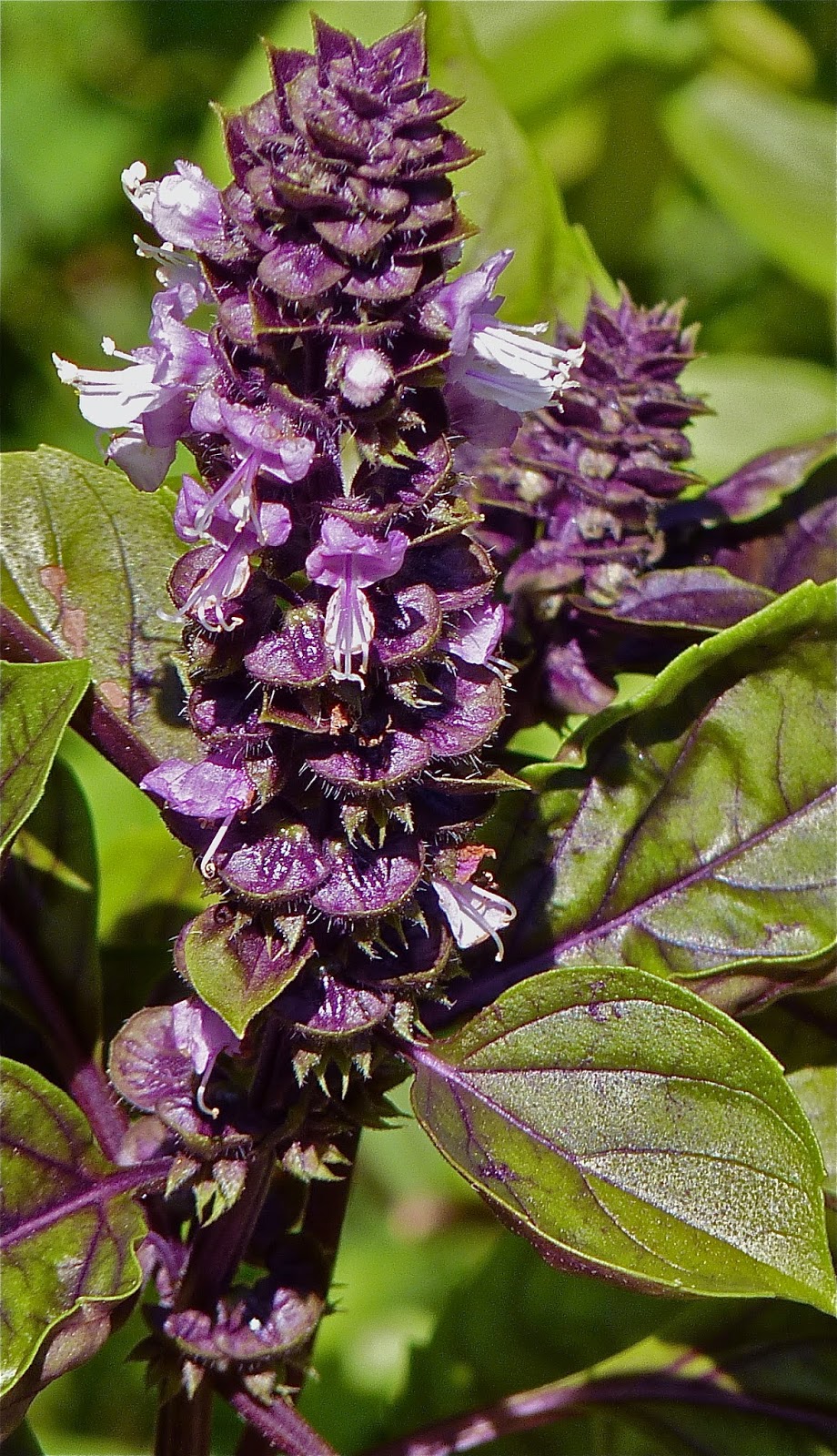 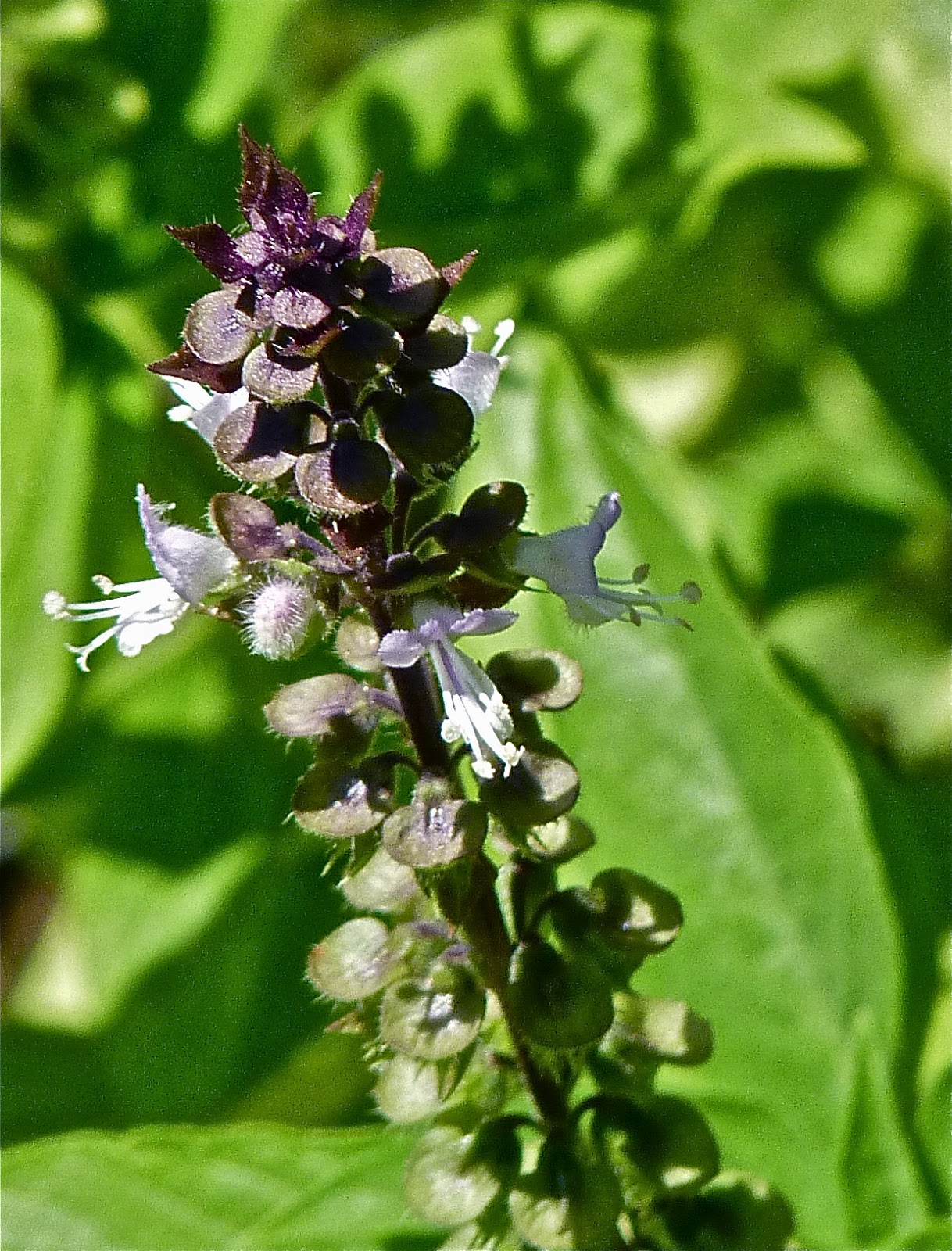 and the usual sweet green Basil. 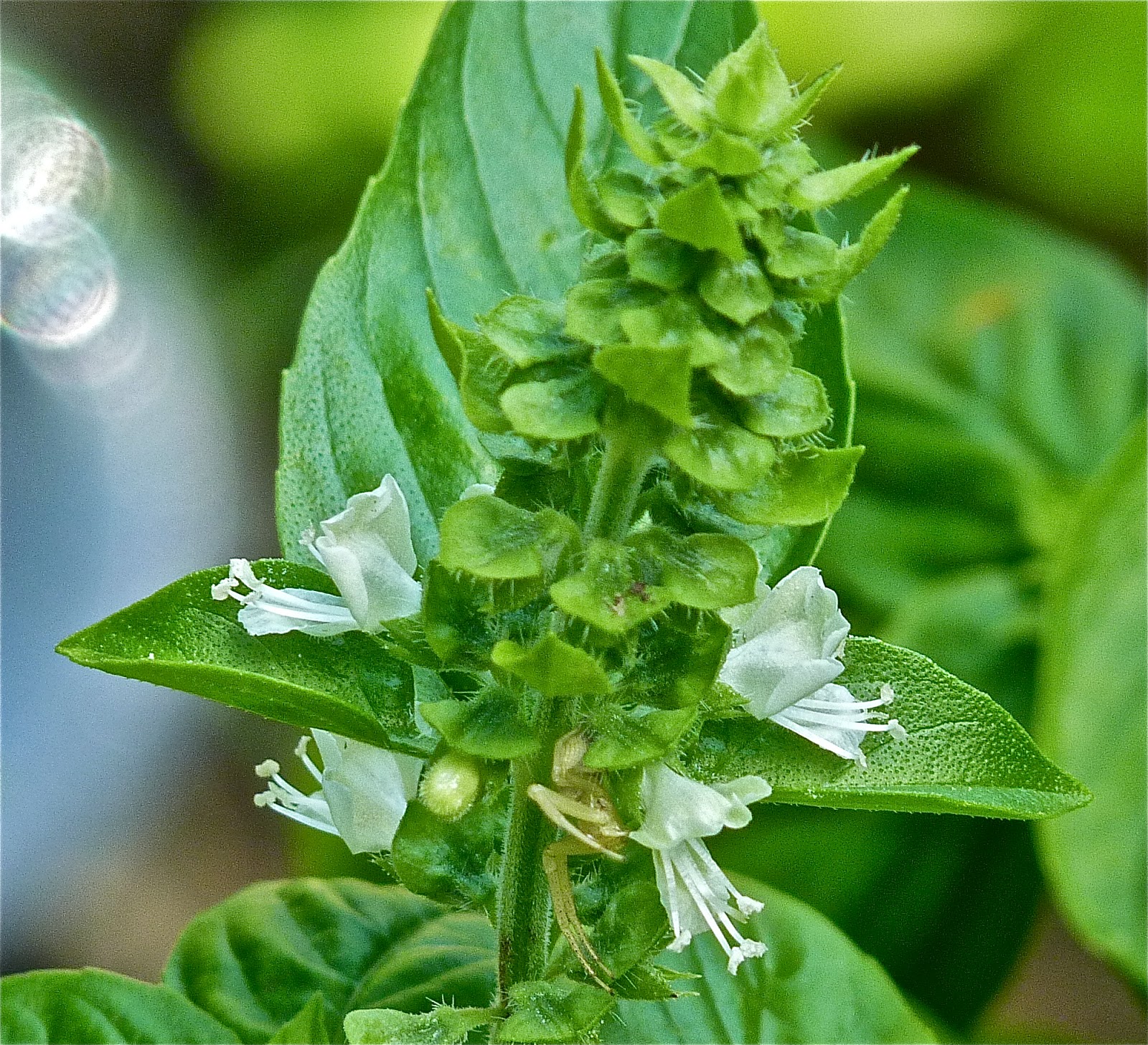 I didn't spot the crab spider hiding behind the white blooms until after I enlarged the photo for editing. These little guys have fewer potential lairs this time of year so I'm happy he found a good spot. Did you know basil blossoms are as delicious as the leaves?  They are not only beautiful looking but quite tasty sprinkled into salads or arrayed atop sliced tomatoes for a more floral version of a Caprese salad.  Just be sure to shake the spiders out, first.

Last but certainly not least is a native workhorse, Prairie verbena (Glandularia bipinnatifida) which is apparently a distant relative to teak trees.  These purple blooms are central Texas garden standbys, persistently offering a bright splash of color to their surroundings from March through at least October, and occasionally blooming through until our first frost.  It is my tendency to take these little troopers a bit for granted because they are so reliable.  In mid to late August however they prove they are stars in their own right, as they shake off heat and drought in a beautiful way, inviting late Summer skippers into the garden.  Here, a verbena offering what I'm pretty sure is a Erynnis funeralis a midafternoon meal. 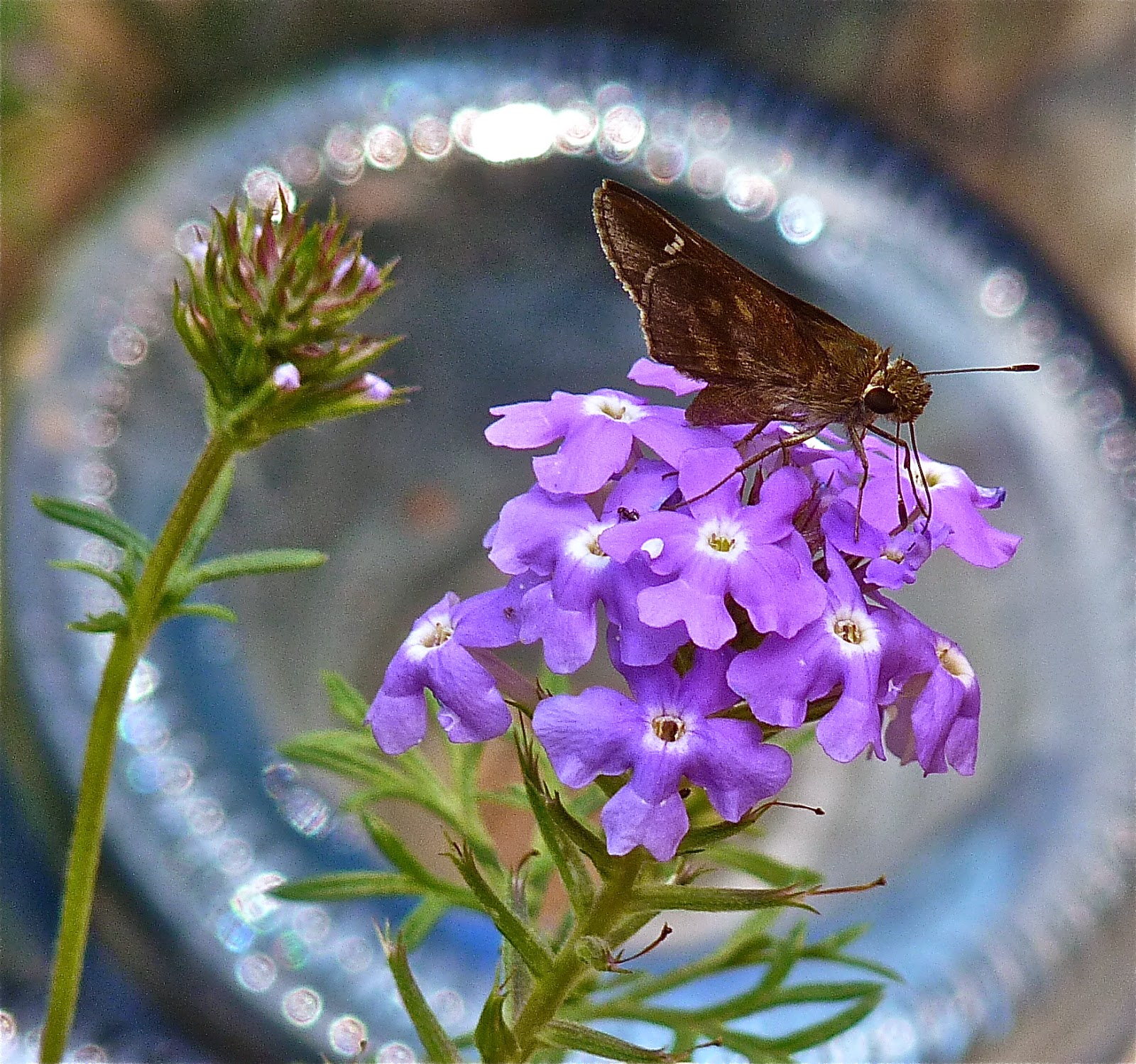 I've been such a wimp this year; whine, whine, whine about the heat is what I'm about. And it hasn't really been all that hot, relatively speaking. Your shots are great--love those basil shots and that little skipper. It will get better, soon. I hope. Stay cool.

Tina: Its hard to think it makes much difference that this year got hot late, because it sure enough is HOT now, and day to day, that is what we have to get through. I've got fingers crossed for early cooling and a little more rain. Too much to ask for? We'll see!

Thank you for the tip about the basil flowers. I can't wait to try that.

Yes, lovely.
And, great shots.
I've done a little work around here. Clean up. Seems there's always clean up.
But, the heat really gets to me, these days.
Fall is just around the corner, though.

Beautiful close-ups, and I'm excited to try basil flowers, too. I love your shot of the hiding crab spider! It's great to know what can survive until the peak of the Death Star's reign each year. This year my mint appears to have died back to the roots this summer--it's in a clay pot, and I probably let it go a whole week without water at some point. I wonder if it will come back. It has surprised me before.

Looking forward to cooler temps, too, even if that means just 90's in the short term. Living here makes you appreciate "brisk" 90-degree days!

The verbena with the skipper enjoying it - very, very cool! Even if your weather is not. I shouldn't tell you that just over 1/2 of August here has been over 90...most 90-92.

At my old house, there were loads of related Verbena (Glandularia) wrightii, never bothered to take pics of the butterflies on them. Tough.

So, not just verbena, but basil and mint take the heat. Something to consider to create more greenery, where I want less negative space...

Debra: I think basil flowers sprinkled over tomatoes is a feast for the eyes as well as the palate. Hope you have a chance to try it soon.

Linda Patchwork: Clean up is one of those thankless tasks that must be done routinely and seems to be most needed when the temperatures are the least conducive. I think the heat is getting to everybody now though. Hurry up Fall!

Mary: My mint is in the ground after "escaping" from a planter long ago. I pull it out routinely, it seems to die back each winter, and boom -every Spring there it is again. Lather, rinse, repeat - the mint and I dance it out annually.

dry heat: The bonus for me with basils and mint is when they are heading towards withering from the heat I have good choices left. Pesto, mint frozen into ice cubes, basil infused oil, mint infused tea, letting basil seed out for the birds. Both plants have turned out to be garden/kitchen work horses and look good doing it.

Like other readers, I wasn't aware that the basil flowers are edible. That's a definite plus! Have you tried Blue African basil? I saw it in a friend's garden last weekend and it was beautiful. Looks very much like Thai basil but she said it stands up to the heat better. She said it's readily available in nurseries so I'll be looking for it next spring. Enjoyed your photos. You're mastering your camera :)

Cat: Thanks for that - I'm working on it!

I will most certainly look for the Blue African for next year - hadn't heard about that one but the more (basil) the merrier.