I do have a child attending UT Austin just at the moment.  So hopefully you'll find it understandable that I'd want to capture this "Longhorn Moment" in my gardens.
Because if there is one plant (other than succulents in a pot) that I don't shy away from planting "late" in the season here, it is caladiums.  Caladiums are part of the Araceae family, which means they are related to Jack in the Pulpits.  I suppose you could think of them as the flashy branch of the family? (Every family has one!)

You probably knew caladiums originally come from South and Central America. But did you know they've been in cultivation in Europe since the late 18th century?  Take that, tulips!  And did you also know that most of them found in these parts are bred in Lake Placid Florida?  I had no idea.

Caladiums work in Texas in the summer.  They are very heat tolerant, the newer types will handle at least some summer sunshine, and though caladiums aren't politically correct (not native!  don't support pollinators!) or au courant in the least?  Though along with crepe myrtles, mimosa trees, monkey grass and St. Augustine lawns they represent a mostly abandoned version of how Austin landscapes used to look? 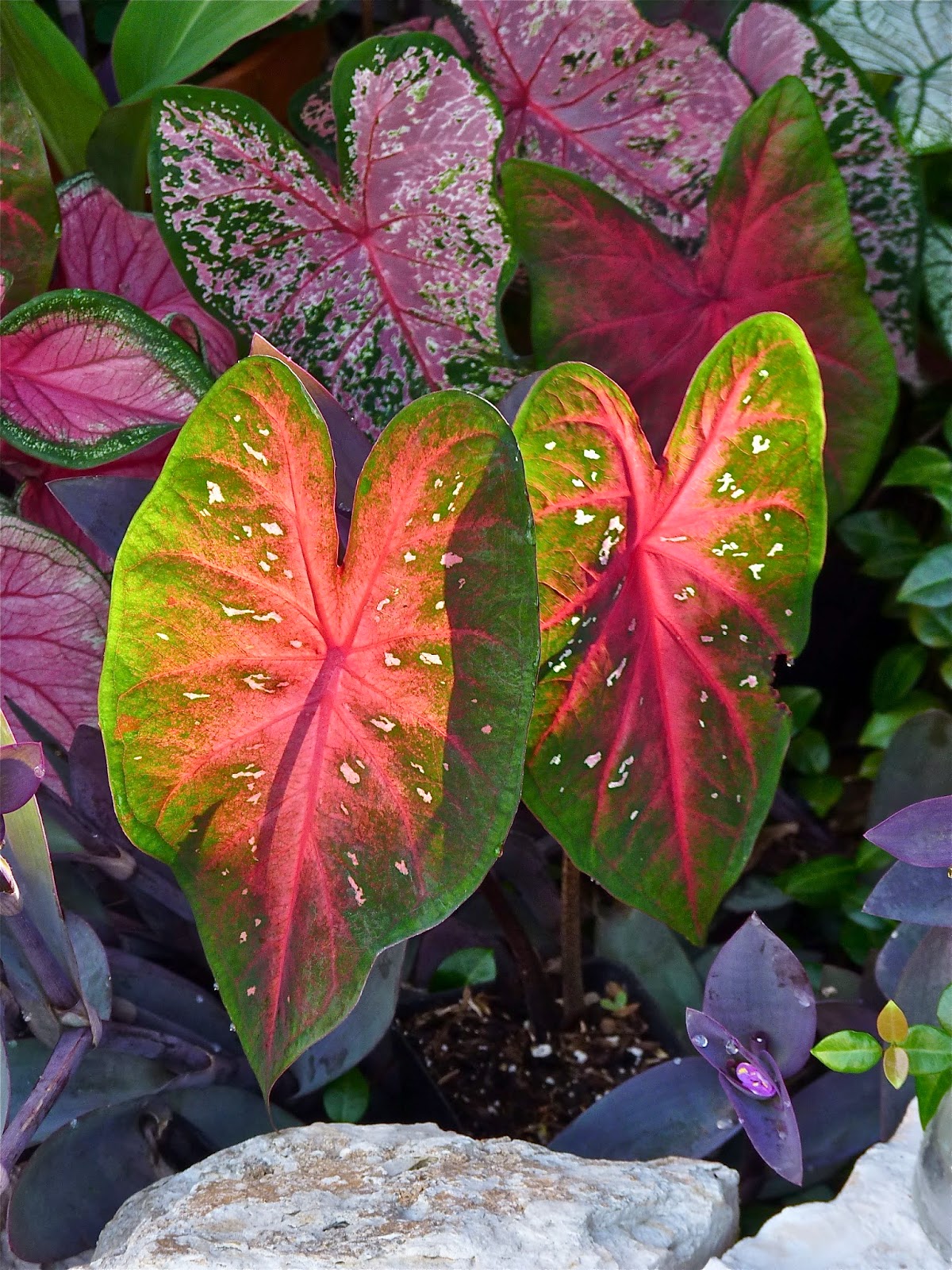 I simply can't get over the way their leaves catch the light.  Call me nostalgic and old fashioned, but this to me is just the way summertime in Austin is supposed to look.
Posted by TexasDeb at 2:18 PM

So much beautiful color, even if the plants aren't pc. :) I like caladiums and they aren't particular guzzlers, are they? Both photos are nice, but the second is just stunning. Like your new anole, too.

Tina: Thank you! The top photo was one I grabbed to send to my brother - an alum who lives out of state. And you're right - those caladiums get the same amount of water as everything else out back so I'm fine with making an exception for them seasonally.

That anole is the first baby seen out in a front bed where I watched several males strut their stuff earlier this year. He's barely 2 inches snout to tail!

The anole is sweet. Definitely gives a dolce vibe. I like caladiums a lot. I planted some for the first time this year and I am thrilled. Colour in the shade? Hurrah! There just aren't a lot of shade tolerant natives for central Texas because let's face it: there wasn't a lot of shade when things were evolving here.

Great color. And, yes...burnt orange is a favorite here, too.
I like caladiums, but they didn't do well here, when I tried.
Maybe time to try again.

Debra: That anole is a charmer. I look for it every time I'm out front. So wee!

I hadn't thought about it that way - the lack of natural shade leading to few plants evolving for that niche. Plus I'm imagining if there were any shaded spots they were filled with every other living thing crowding in to get away from the sun!

Linda: I can't have caladiums out front where the deer (and the antelope) play, but in the back they are happy campers. The newer varieties seem to tolerate a few hours of sun so far with no signs of distress. I don't try to pull them for a multi-year display however, I just treat them as annuals and that is that.

I can see why you like those big-eared, stained-glass leaves. I've never tried growing caladiums myself, but you're right, they do evoke lush, old-Austin style gardens, which is nice.

Pam: And I personally am an old Austin lush : ), so the pairing really works! I remember driving through Tarrytown, going home from swimming in the city pool at Reed Park, passing lawn after lawn dotted with oak, crepe myrtle and mimosa trees, typically circled by beds of caladiums lined with monkey grass.

For me these caladiums are a nod to Summertime Past.

I planted a big mixed bag of caladiums this year. They remind me of the ones my mom planted for many years at her house. It's an easy way to have bright color in the shade.

Shirley: I've always loved caladiums but hadn't planted any for several years as I'd been concentrating on adding native perennials. This year I put in a few and immediately remembered how smitten I am with their shapes and colors. I'm betting they'll be a regular feature (in a limited area) in my gardens again.

I love the vibrant colors you have going on there!!!! Hook 'em horns! :) I have learned that since moving from Canada ;) My kids do the hand signal thingy too

Heather: Learning that hand sign is an important part of the process of "becoming" a Texan - even if you don't end up going to school at UT Austin you gotta know how to "hook em!".

I love purple and orange together - I try it every way I can in the garden beds and occasionally it works! And I love deep pinks as well so caladiums are right up my alley.