A start reveals the startling...

Way back when, days ago, when I was yet lost to innocence, I posted the following cringeworthy photo as part of a monthly "wide shot" meme. It revealed banks of primrose mostly gone to seed, crowding out other established perennials waiting their turn to shine and weeds appearing in numbers that rendered the paths more conceptual than practical.
Margaret Roach who writes at A Way To Garden summed it up perfectly, stating the appearance of gardens this time of year is subject to a case of  "the shaggies" which certainly resonated with what I was seeing.  Pictures of my beds may be worth a thousand words but this area had been succinctly captured by just the one term.

I had not wanted to post my photographic auto-indictment, but I knew if I did it would help motivate me out into the garden to begin the work needed to reclaim those beds. Any job no matter how large or how small begins simply by getting started.  So start I did.

Here you have it, another look down from above with at least a slightly improved version of my vision.  Better, yes?  Yes!  That is my "start".  Now, for the startling...  As I was pulling out primrose by the hands full, I began to notice a few of these. 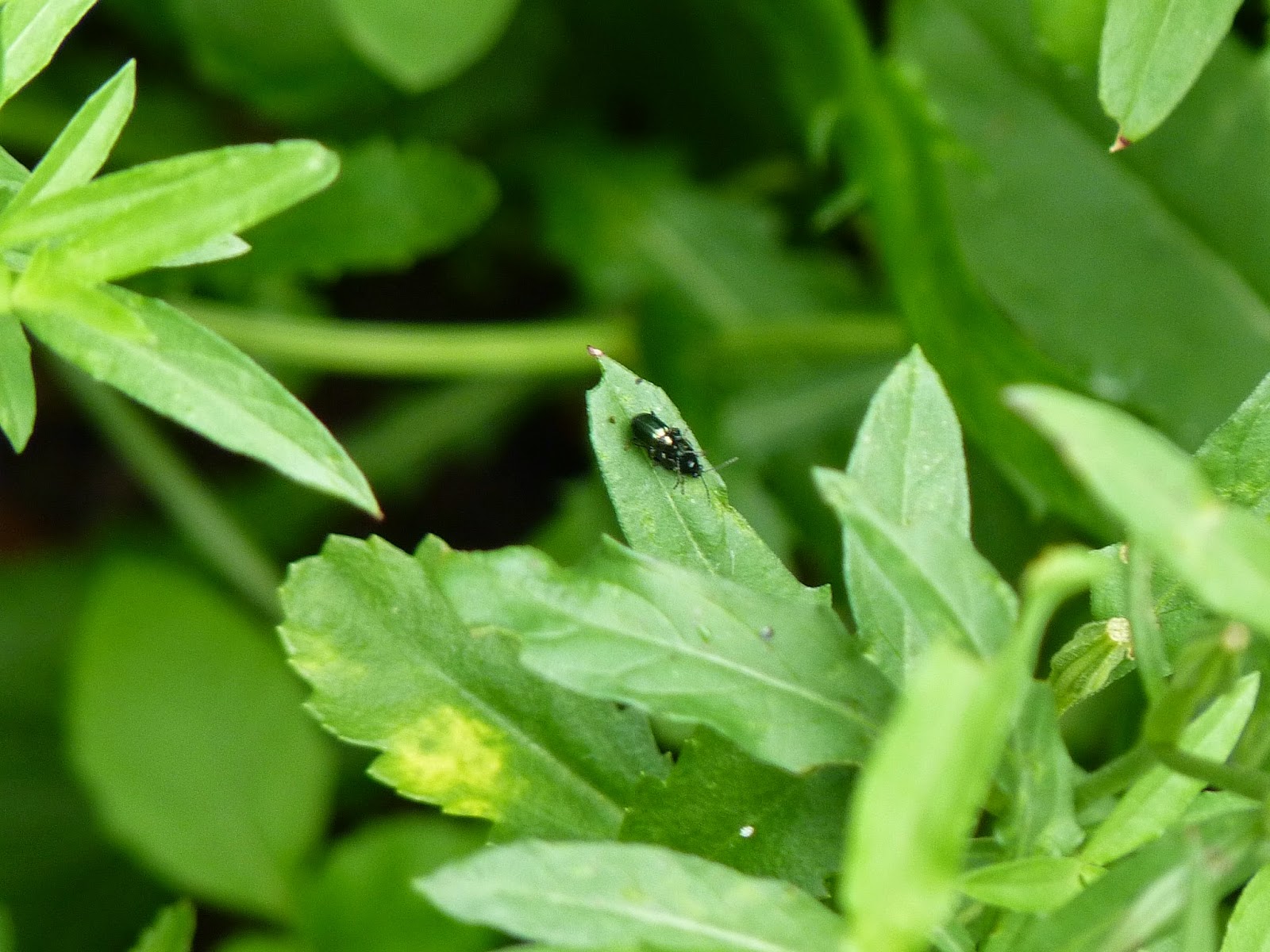 After I'd spent several sessions working and had filled my tip bag many times over, when I looked again at the greatly reduced number of primrose plants they each looked more like this: 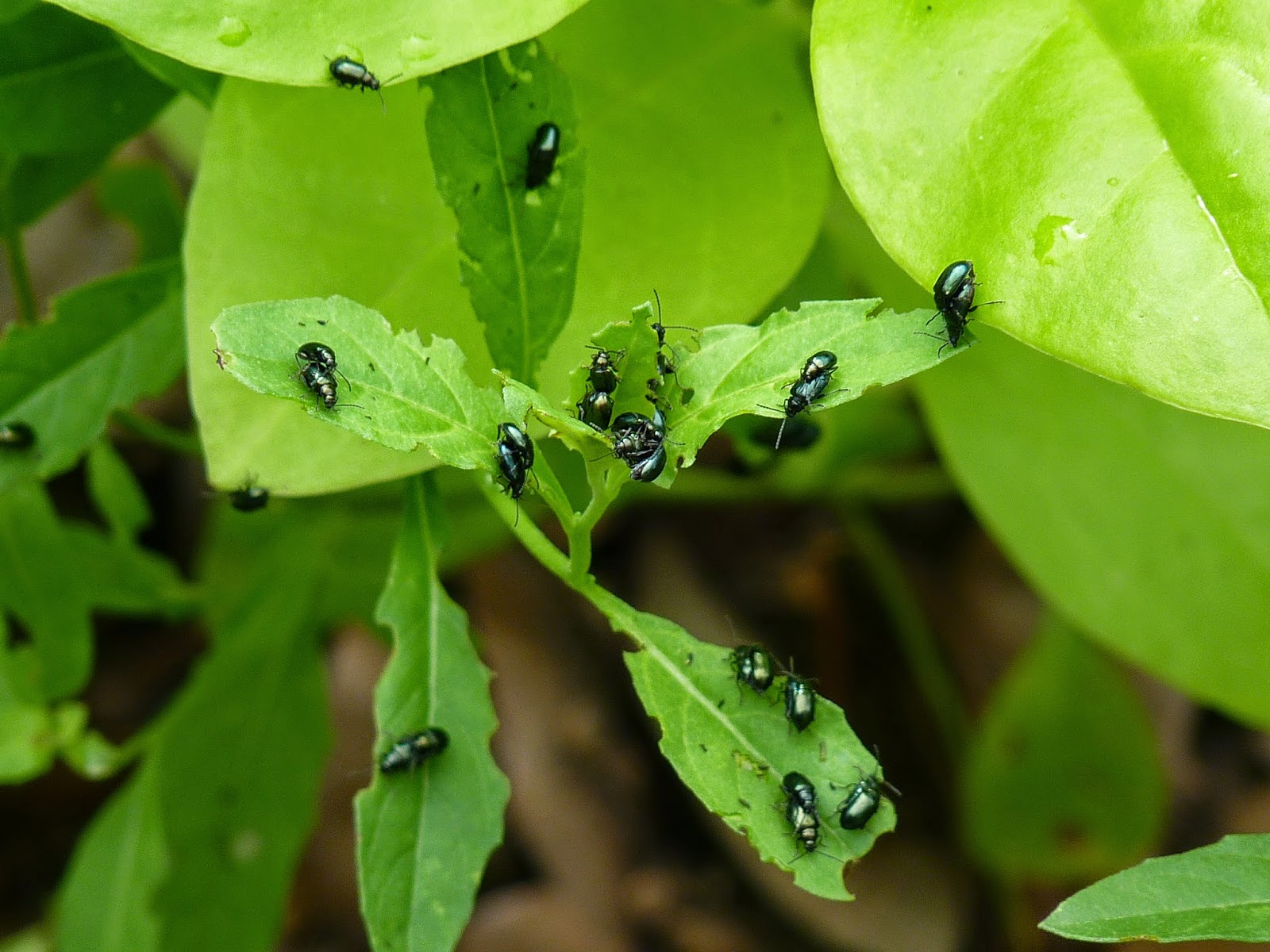 Yikes!  These little beetles are Altica litigata, and like me, they love them some primrose. Fortunately they don't bite or sting and frankly I think the way their metallic black backs glisten in the sun is handsome.  Unfortunately in addition to their tasties for primrose they are reportedly inclined to move over to crepe myrtle trees to support their colonies.  Which we have three of, fairly near by.  Crepe myrtles, I mean.

No, Altica litigata, no thank you.  No crepe myrtles for you!

I'm optimistic I can handle the beetles non-chemically, with a combination of removing the host plants (including leaf litter underneath) and spending as long as it takes knocking the remaining beetles into soapy water.  These little fellas fly, but not far, and at this point I'm finding it fairly easy to knock them into a deadly soap bath to reduce their numbers.   I don't like stepping into the beds and compressing the soil but at the moment it is a fair trade and what I must do to gain access.

There are several lessons to be learned from this, but one chief lesson here is to avoid letting anything this close to a monoculture get established, no matter how much I like weeks of pink blossoms in my gardens.  Monocultures naturally encourage infestations, and my garden beds are currently proof of that.

Good advice. I've done the same thing--let something I like in the garden, take over the garden. I always regret it, but I seem to make the same mistake over again. (Definition of insanity, anyone??)
"The shaggies"--nice phrase, I'll need to remember that one!

Flea beetles. I saw some the other day and thought they had a lovely sheen until I read more. Hope they don;t become a problem.
The after shot looks really nice and might even inspire me to get outside and brave the mosquitoes.
Do you replant the area with primrose seeds for the next year? Which makes me think I should go look for seed pods if it isn't too late.

Tina: I was just thinking about that yesterday, the idea that I am a serial mistake maker. I will let one plant get out of control and spend however long addressing that situation only to turn around and let a different plant do essentially the same thing.

I've yet to strike just the right balance between simply letting Nature go for broke (and damn the consequences!) and gently guiding these spaces around certain pitfalls.

Debra: When I saw a few of the beetles that was my first reaction - Oooh, pretty! I've been out with my soapy water several times and am not seeing many of them at all, so fingers crossed I caught them in time.

I haven't ever tried to reseed primrose. Perhaps they do that all by themselves, though it is my impression they spread more by roots from established plants. I usually transplant them early in the year to get new ones where I want them. A subject ripe for further research!