They Bring Their Own Light

There are some blooms that seem to create their own light.  I'm not sure if that is why I'm so drawn to them, but I can't seem to ever get enough.

Other than how they draw the light, these plants don't seem to have much else in common. They certainly aren't all a certain color or take any particular form.  The Beebalm is a native perennial, the Grandpa Ott Morning Glory is a reseeding annual vine, one of the original plants offered by the Seed Saver's Exchange,
and the so-called Dwarf Pomegranate bush represents the hazards of buying a plant off the back of a truck from an unknown vendor. 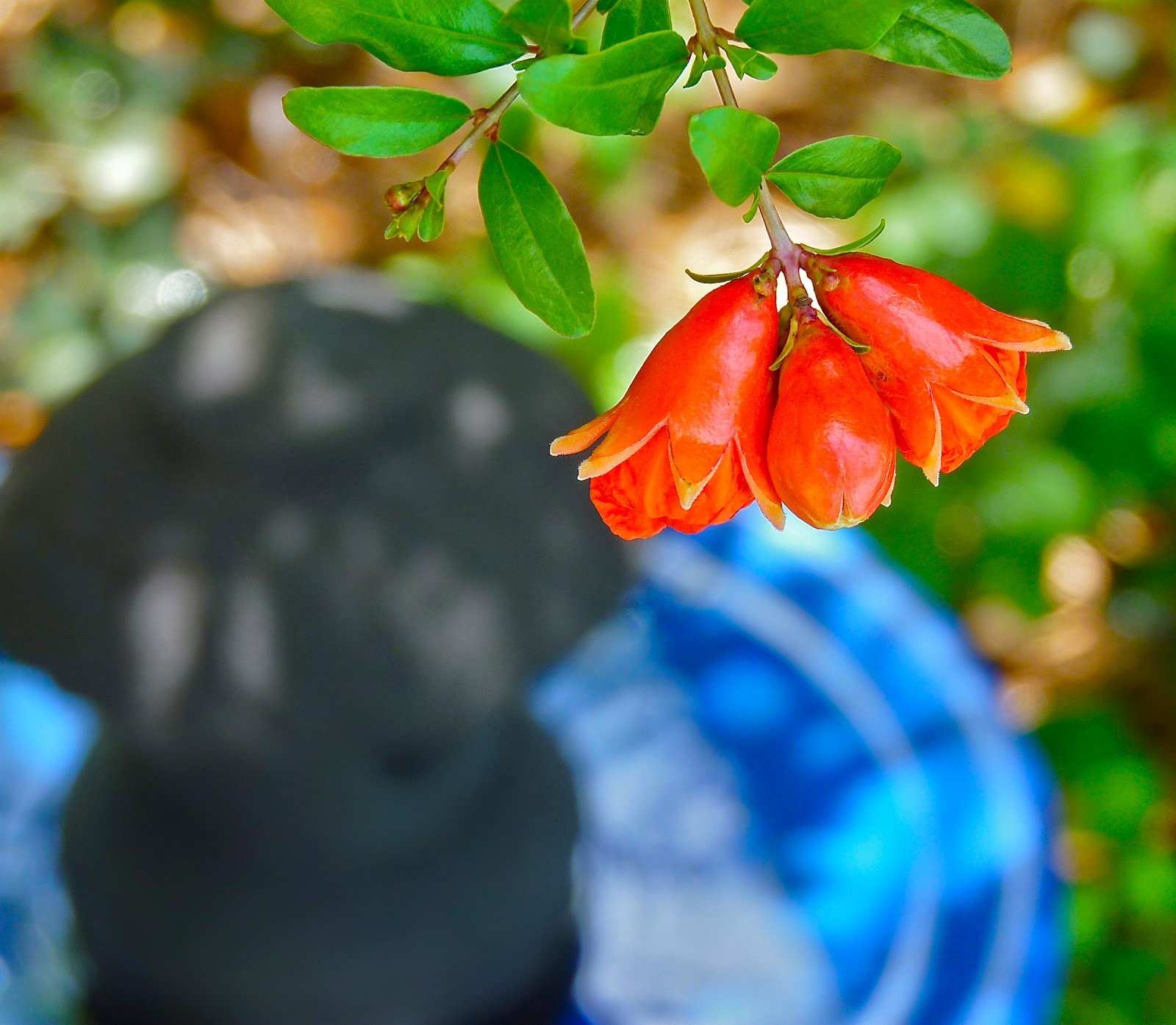 I'd been shopping at one of my favorite local nurseries when an unmarked truck pulled up to deliver a shipment of plants. They had several extra pomegranate trees in pots supposedly "left over" from another nursery that had declined to take more than they'd originally ordered, and I inquired if I could have any. Marked "Dwarf Pomegranate" in chalk on the side, I figured I had just the spot for two and we quickly struck a deal.

As it turns out, the pomegranate trees grew to about eight feet.  It is the fruit that is small, not the trees themselves.  Details, you guys, details.

It matters not.  Though it means I'm trimming off suckers from the base for weeks each year, I chose to clip them up into a mini-canopy where they arch gracefully over the cobalt blue birdbath.  It is a vignette that puts a smile on my face nearly year 'round, especially this year when both trees seem to have gotten whatever they needed weather wise and are putting on an impressive display of flowers. 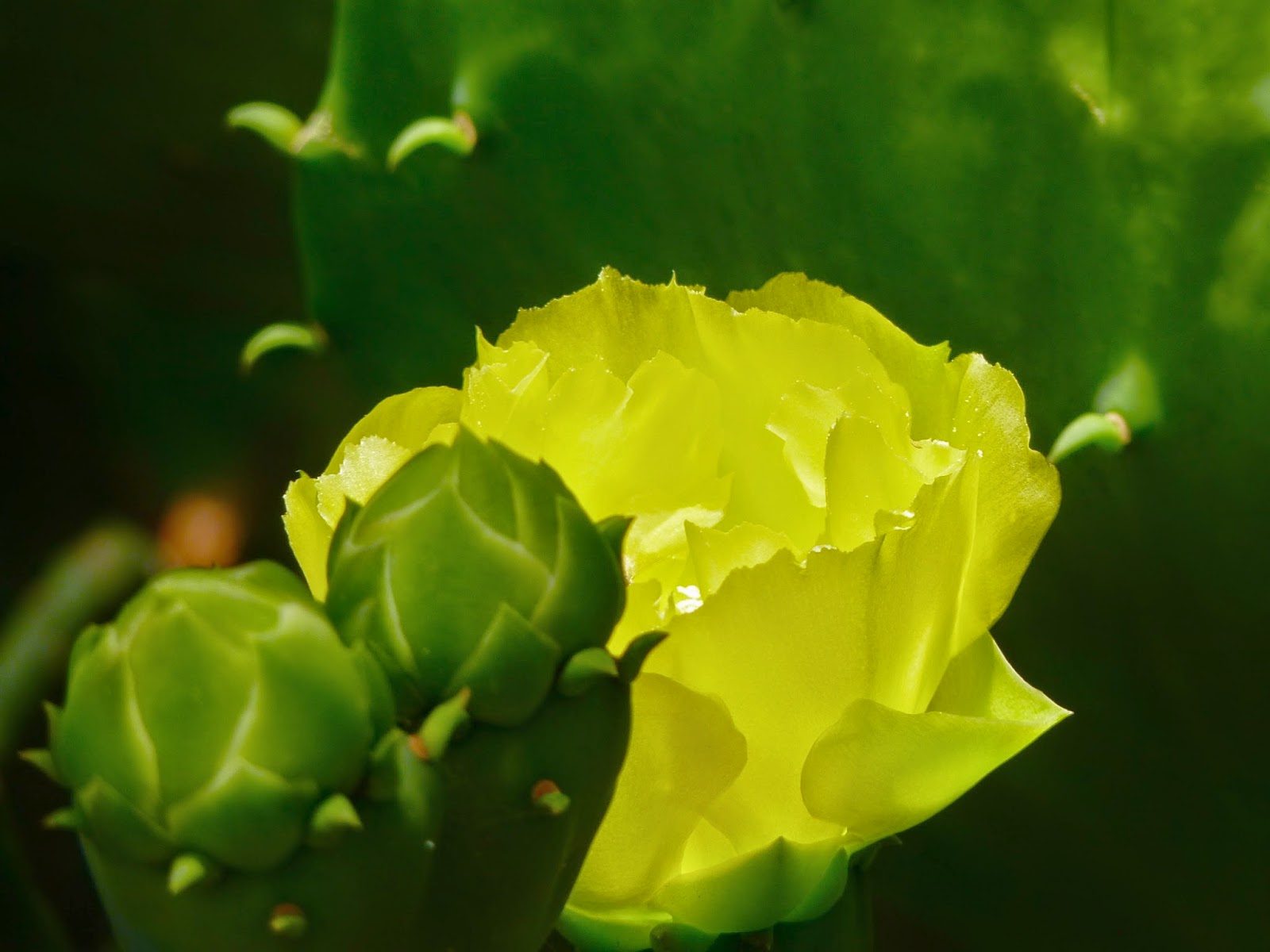 Speaking of impressive displays of flowers - the Opuntia ellisiana, or spineless prickly pear, are pulling out all the stops this year.  These blooms are amazing - they just glow.  I didn't pay a penny for any of mine - I got my first pad off a pile curbside from another gardener who was trimming her plants down.  One pad led to another and pretty soon I was the one with piles of pads to give away.  Spineless prickly pear - the Mother of All Passalongs.

And this last one, well, I actually don't know precisely what it will look like when it fully unfurls but, look!  My very first cholla blossom-to-be!  I've had this plant for years but I'm like a child with a new toy watching it bloom for the first time.  I can hardly wait to welcome it and see who else shows up to admire it along with me. 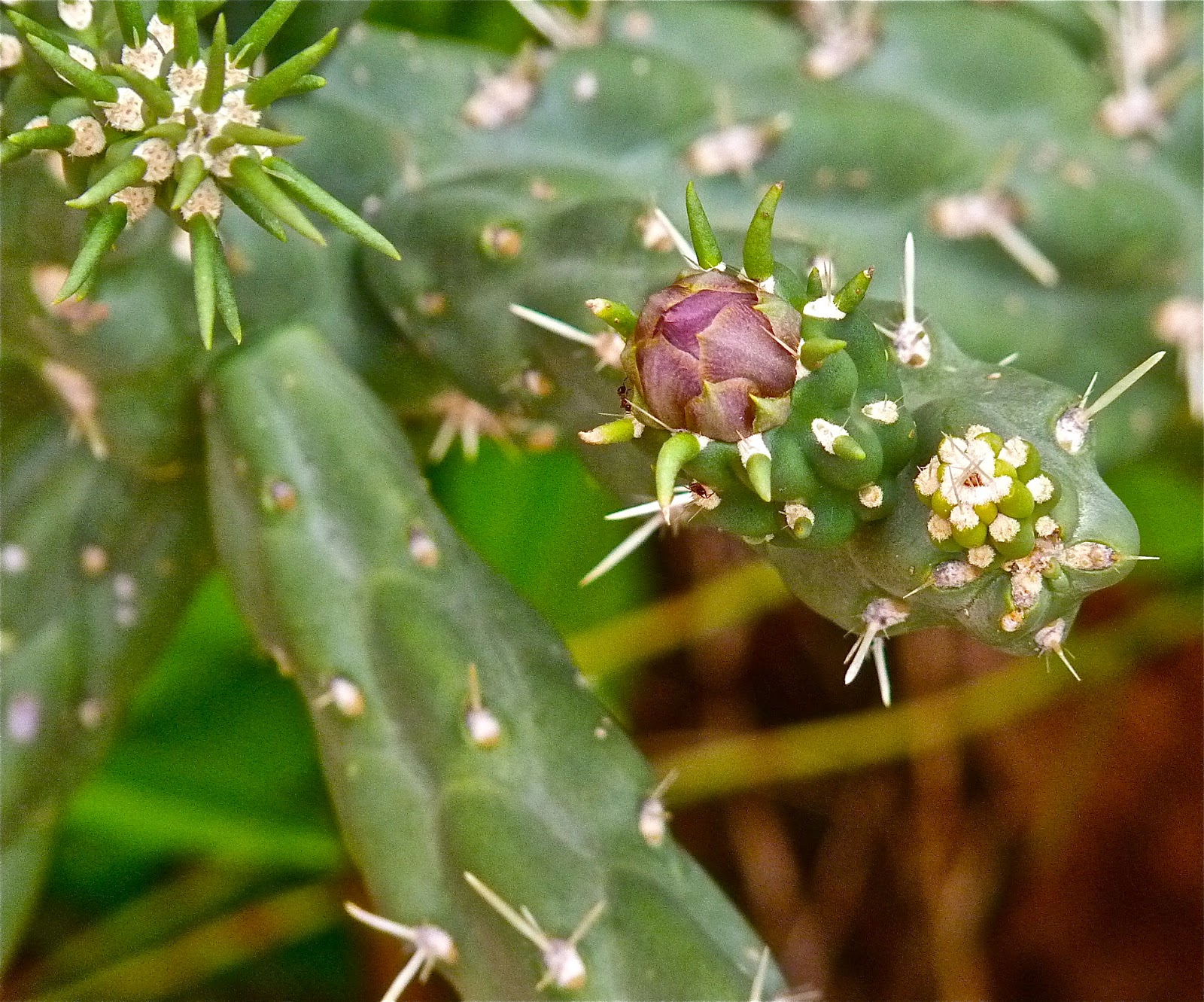 You have a painter's eye for blossoms. These are beautiful photos. I have been admiring the spineless prickly pears lately. Not sure why I never noticed them before but the blossoms seem so lush.

Debra: Painter's eye - I take that as highest compliment - thank you!

I agree - spineless prickly pears are in great form this year. Even though these aren't super thorny there's something about the delicate flower atop a spiky pad that calls to me.

Such a nice variety--of color,form and you're right--they all have a light to them. That combo of the Pomegranate with the blue birdbath, is quite fetching. What is that color? Orange? Red? I can't ever quite name it. Deb, those photos are beautiful!

Tina: Thank you, and Ha! I grew up using a Crayola crayon called "orange red" and I am equally sure they had one called "red orange" as well (though looking it up? Orange red has been retired!). These pomegranate blooms are certainly one or the other.

My daughter originally suggested putting that birdbath nearby - she's an artist and told me the use of orange and blue (opposites on the color wheel) was sure to please the eye.

Morning glory does have the most amazing flower, seemingly with a glow-light at the center. I made that same mistake with a dwarf pomegranate that I bought from BSN. Didn't realize that the tree would grow as large as it did. But I love it anyway.

Pam: I'm even a bit of a sucker for wild bindweed because of their mini morning glory flowers. It's gotten me into seeding out trouble more than once!

And ha! Mine are from BSN too - their old location on Riverside. That's how old they are (and I am!). I do love my poms, wouldn't trade them for anything.