On the days I am not posting to this or my garden blog either one, under ordinary circumstances (read:full computer access) I am reading other people's blogs.  Lots (and lots) of them.  Many of them having something to do with growing or cooking food.  Or both.
Under that category of Nonposting/Reading days there are two subcategories: 1) Days I read other people's blogs and think to myself "aaaawesome" as I print out recipes to try, and 2) days I read other people's blogs and think to myself "well there you go, I'm glad somebody out there is crazy ambitious enough to try that".
Some recipes are exciting enough, and I'll have the ingredients on hand, so I proceed immediately from my printer to the kitchen.
Other recipes require waiting for a scheduled trip to the store or perhaps a special occasion when I will be motivated to go to just a bit more trouble or expense than usual.  Most of the time I simply won't make a trip to the store "just" to pick up one ingredient for a recipe and I've learned not to try most recipes that call for equipment I don't already have.  Chances are good, after three decades of home cooking,  if I don't already have something, I probably don't really need it.
My idealized recipe is one that uses ingredients I have around routinely, with flavors my family already likes, but in some novel combination that assures elevation to the realm of Repeater.
So recently, when I spotted a recipe for Chipotle Sweet Potato Soup I realized a confluence of events had occurred that was going to reach potential perfection in the form of a pot of soup.
You see, my daughter has one of her oldest friends visiting, who just so happens to be vegan.  To protect her privacy I'll call her FreeSpiritGirl.  FSG enjoys thrift store hunting as much as I do, so yesterday while introducing her to "my" Goodwill store, it seemed a good portent when she found a brand new article of clothing she'd been needing for quite some time while I found a great soup pot over in housewares, just the size I'd been wanting.
Aside: We will go to certain lengths to accommodate guests around here that we rarely extend to immediate family.  Chalk that up to familiarity breeding contempt, or the idea we can bend for a visitor without breaking as opposed to a potentially long term change for family.
At any rate, the Hub, once assured he would not be required to eat vegan for the duration of FSG's visit, has been quite cheerfully willing to try out any number of vegan dishes this week, especially in the form of chocolate chip cookies.  ("That's not vegan, he maintained, that's just a really good cookie!".)


This recipe seemed just the right confluence.  A way to break in my new soup pot, a way to acknowledge the pleasures of non-carnivorous eating, and a wonderful warm meal, all packed into one.  Genius!
Chipotle sweet potato soup 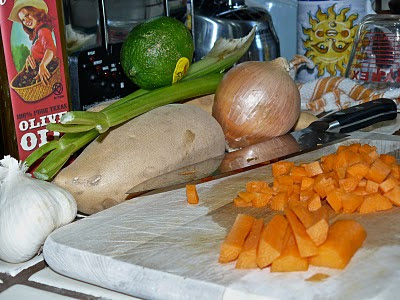 Ingredients:
2 pounds of sweet potatoes (about two large or three skinny ones), peeled and cubed
2 carrots, peeled and diced
2 stalks of celery, diced
1 medium onion, diced
4 cloves of garlic, minced
4 cups of vegetable broth
2-4 chipotles in adobo (depending on your heat tolerance) chopped
1 teaspoon ginger
1 teaspoon cinnamon
1/2 teaspoon ground cloves
1/2 teaspoon nutmeg
Juice of one lime
1 tablespoon of olive oil
Salt and black pepper to taste
Non-Vegan Option:  Sour cream
Cinnamon-chipotle pecans (recipe to follow)
Method: Heat the olive oil on medium low in a large soup pot, and cook the onions, celery and carrot for 10 minutes, stirring occasionally. Add the garlic and cook for one more minute.
Add the sweet potatoes, broth, chipotles, ginger, cinnamon, cloves and nutmeg to the pot. Bring to a boil and then simmer, covered, for 20 minutes or until sweet potatoes are tender.


Let the soup cool, and then in batches, purée it in the blender. If you prefer, you can use an immersion blender in the pot instead.
Once the soup has been puréed, stir in the lime juice and add salt and black pepper to taste. Serve topped with some of the chopped cinnamon-chipotle pecans and (optional) a dollop of sour cream. Serves 8.


Method: Melt the fat in a skillet on low heat. Add the pecans and stir them until they are covered. Add the cinnamon and chipotle powder and stir to coat. Cook the pecans, stirring occasionally, for ten minutes. Salt to taste. 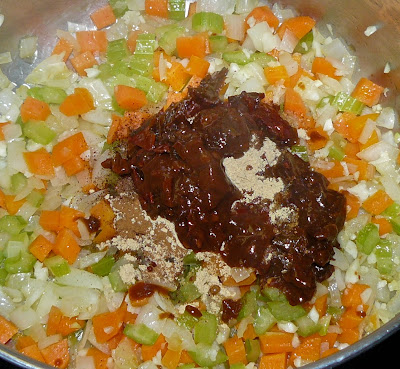 I made the soup yesterday with plans on serving it today so the flavors had time to throw their own get-acquainted party overnight. I used 3 chipotles, which after tasting I decided is several clicks past "too spicy" for the rest of the family, so for my daughter and Hub I will stir in some dairy to take it down a notch or three. Yes, yes, that will make it non-vegan, but my sweet family aren't vegan now and likely never will be, so no real harm done.
I will make the pecans right before serving so they'll still be warm, and I plan on using coconut oil to keep the nuts on the straight and narrow, vegan wise.
While this was cooking it made my house smell like pumpkin pie - the spices were amazingly aromatic.  Now I can barely wait to ladle this into bowls and serve it up to friends and family.
I hope you'll treat yourself to this sooner rather than later. This recipe is cinchy and could be table ready in about an hour if you were in a hurry for something warm and spicy and delicious and healthy for your own lunch or dinner.
You surely won't want to wait for a vegan house guest or a new soup pot to try it.  But, just in case you do have either one around your house, then you and this soup need wait no longer.  Let serendipity rule.
Posted by TexasDeb at 4:31 PM

and not sure if it's new or not, but i love the header up there on your blogeroo. the sprigs laying on the towel, very nice lady.

Thanks Jen - you are a total sweetie. The sprigs are thyme from the garden and they are new, so thanks again for noticing!

This soup is not only delicious but won't break the bank, which I appreciate these days. Let me know if you try it out.

I copied this one to Word, printed it out and am checking the bin for sweet potatoes. I love dishes that roll 'round the tongue, hitting all the high notes--sweet, sour and spicy.

PPS One of the pictures, the one labeled, pot.JPG.jpg, showed on my computer as a link instead of an image.

Kat: Do watch the chipotle if you have pepper sensitive tongues. The amount I used proved to be way too spicy for folks 'round here. I got that problematic jpeg out of the way - thanks for the heads up - I was interrupted putting photos in and somehow got wanky with the html. Better now!