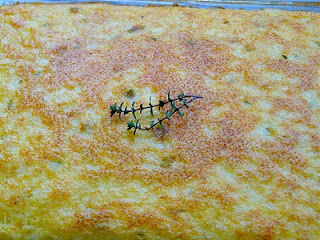 When I get extremely frustrated, I lose IQ points. Lots of them. More than I can afford to.

So this morning when I decided to try a recipe simply because it called for two and one-half cups grated cheese, hand grating the cheese being my strategy to stay warm(er) in a progressively cooling house while sitting through the fourth visit in as many weeks to try and fix our sputtering heat pump, I should have expected the outcome.

Mistakes would be made.

I read, in the list of ingredients, "2 cups quick-cooking grits". The first step in the directions (after preheating the oven) was to cook the grits according to the directions on the back of the package.

I had some cooked leftover rice already on hand, so, feeling very clever,  I figured out in my head how much less of the two cups of grits to cook (ballparking the cooked rice available to substitute in for one half a cup of uncooked grits).  Smiling to myself, I measured the 1 1/2 cups of grits out, and put the water on the heat.

I grated the cheese, warming up from the effort as was the initial incentive for the dish.  I assembled the other ingredients. With a slightly warmer brain to my advantage I then noticed how, although the photo for the recipe was clearly of an 11x13 casserole, this recipe specifically directed me to butter a 9 inch baking dish.

I stepped back and took a better look at the volume of my now cooked grits after stirring in the rest of the ingredients called for, and gulped. This recipe was only meant to produce four servings.

Looking at the mass in the pan I realized, unless this was a special dish meant to provide four servings for premeet college track stars or marathoners desiring a carbohydrate blitz, I'd way miscalculated.  Way.

I read the ingredients again.  The recipe obviously (now) called for two COOKED cups of grits, not two uncooked cups of grits.

Sigh. Cheese grits are very forgiving I decided. I took a deep breath and slid the casserole into the oven. Whatever I had now, I sure hoped I liked it because in an hour I would have an awful lot of it. 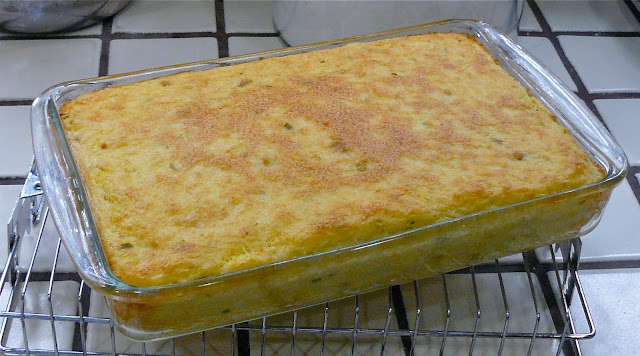 Happy ending. I'd overcompensated with jalapeño peppers because I only had pickled slices on hand, so at least the pepper component of the dish was spot on.

If it lacked a certain almost overbearing salty cheesiness I was accustomed to from other recipes, this misread mixture made up for that with a delicacy of crust and interesting texture I attributed to the rice added in with the grits.

Now I am keeping my fingers crossed the rest of the folks around here respond well. Otherwise I am most definitely going to get my fill of grits in the days to come.

So here is the recipe (mostly) as written.


Cook grits according to the directions on the back of the package (and yes, this was where it all went terribly off track). Remove from the heat and add the next six ingredients. 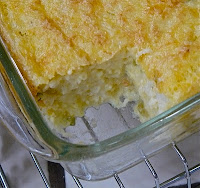 Stir well and season with garlic salt to taste.


Pour into a buttered 9 inch baking dish and bake for one hour. Let cool slightly before slicing and serving.

If any of you manage to make this correctly, I'll be interested to hear if you like it. I may yet try this out in the far future. It will take at least 5-6 days to run through the massive quantities of baked grits already on hand, but it would be fun to know what this recipe is meant to taste like!

Postscript: The heater repairman has been here for four and a half hours. If he doesn't pronounce us "repaired" pretty soon I suppose I'll ask him to sit down for a late lunch of grits, maybe put a cot out in the hall by the furnace. It might not be warm in this house but at least we won't starve!
Posted by TexasDeb at 2:03 PM

I'm laughing. A cold house is sad and losing your gray matter is sad but the way you said it is funny.

I LOVE Low Country shrimp 'n grits. And my mother's cheese grits. But I can't make a grits dish with ONE STICK of butter IN ADDITION to 2 1/2 cups of cheese (which is nearly as high in fat as butter) for just the two of us. I'm thinking I want to eat it at else's house so I don't know the fat content and I can just enjoy it.

The way I accidentally made this, (using two cups uncooked grits as a starting point) I ended up with about 348 servings. And it tastes really yummy.

So if I did attempt this recipe for 4 servings, I'd cut way down on the butter and the cheese. WAY.

It is not so much clobber you between the eyes cheese grits that way, more like sneak up and whisper in your ears cheese grits.