[A word from our sponsor (aka:me).  I realize I write a lot about meaty topics. By that I do not mean I write serious thoughtful pieces, but rather about meat. Cooking and eating meat. I also realize there are many out there who do not eat meat for their own reasons. I respect that and I respect them. I too eschew meat at times. But I am not only cooking for myself in this lifetime so my vegetarian meal opportunities are few and far in between. That said, the following would make a lovely entrée served up with some nice chewy artisanal bread and lovely glass of wine (if you allow a bit of egg and dairy). What? You don't drink alcohol? Have a glass of iced tea. No caffeine either? Oh just read, for heavens sake and you can serve this up any way you like.]

I had two heads of beautiful organic broccoli in the refrigerator that wanted to become some sort of fabulous broccoli salad when they grew up.

I had the remnants of a carton of buttermilk, purchased to prepare something I don't even remember (I'm sure it was delicious?).

I had an even more beautiful knife, a real knife, a true chef's tool, which was a Mother's Day gift from ChefSon.

I saw this post from SmittenKitchen and it was Crave-at-First-Sight.

Then why did it take me nearly two weeks to get around to making it? I don't know, honestly. I do this all the time, see something that looks delicious and I have ingredients on hand or readily obtainable and I print the recipe out and at times even start talking about it as something I am "going" to do, and then I don't. 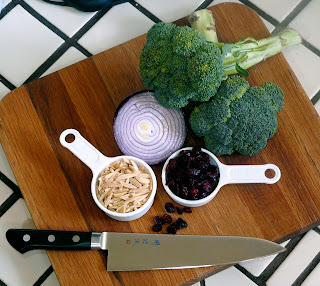 All that is moot at the moment because this morning, I drew a deep breath, got my workspace ready, assembled my ingredients and the necessary tools and made Broccoli Slaw.

I followed Smitten's recipe exactly. I too used the stems as well as the flowrets because broccoli is broccoli folks and if you like the way one end of the stalk tastes there is no reason to believe you won't like the other. Plus it all gets chopped up, so there is not a hugely appreciable difference once you start to munch. 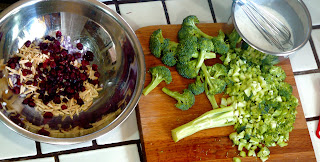 I originally thought to myself I'd prep this with the amounts called for and then throw in more everything-that-wasn't-broccoli. What could be wrong with more onion or more dried cranberries or more toasted almonds? I'll tell you what - nothing. Only once I'd tasted it (just to, you know, "correct" the seasonings. Three times. Silly seasonings.), this slaw wowed my taste buds as hitting pretty much close to the perfection mark at the proportions as called for in the recipe. I left well enough alone. [Score:One for the recovering perfectionist, vs. a gazillion for the universe]

This supposedly keeps up to a week in the refrigerator if, as Smitten Kitchen adorably notes, you do not have any pregnant woman nearby. I'd like to expand that caveat slightly. I am well at the opposite end of the reproduction curve and I will be shocked if this broccoli crack lasts more than 3-4 days around here. You don't have to be riding the pregnant hormone horse to appreciate this wonderfully crisp, slightly freshly greenly sweet amazingly crunchy combination. You only need to like broccoli, appreciate crunchy foods, and have working mouth parts.

I've read on a couple other food blogs where people are suggesting recipes be rated, rather than every blogger writing that every recipe is "fantastic!" every time. I tend not to blog about recipes that don't turn out very well although I did tell y'all about the braised rabbit dish that wasn't awful - it just didn't live up to my expectations. That was more the pasta's fault than the rabbit's I'd say and I don't want anybody to be discouraged from trying rabbit. 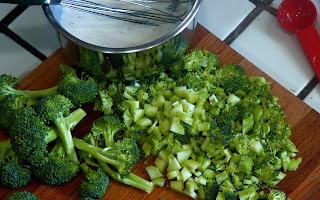 On the other hand, if I were to rate this broccoli slaw recipe, I would give it 438 stars out of a possible 5. Truly. I have been craving broccoli salad of some sort for weeks now - you can ask the ladies I walk with for exercise. We spent the better portion of a half hour last week dissecting the reasons I might not have found a recipe yet to make a broccoli salad at home that I like as much as I typically like the ones I've gotten at restaurants or from the deli counter at my food co-op. 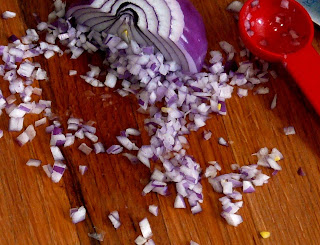 I like that I got a red onion that was strong but in a good sweetly insistent onionly way, rather than the obnoxious red onions I get occasionally that remind me of why I used to never like uncooked onion in anything.

You can see, comparing Smitten's photograph to mine, that her salad is a leetle less chopped than mine is.. 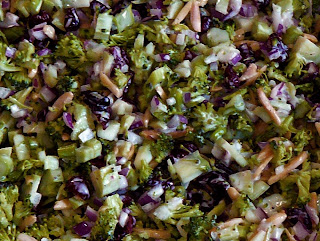 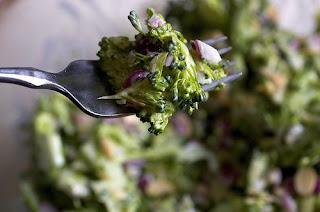 And here is Smitten's. Please note - I am asking you to focus on the size of the pieces and not the fact that her photography skills are forty times better than mine. Let's just stay on topic, shall we?
Well there is a perfectly reasonable explanation for that at least. New Knife! It took all my self control to stop chopping while the food was still large enough to see without a microscope. I won't apologize. When you have a sharp knife, as I now do for the first time in years, chopping is fun, people! 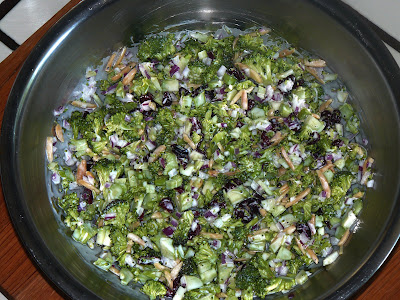 I strongly suggest you do yourself a large favor and make this slaw. Proceed without caution to SmittenKitchen to get the recipe and get started. Stat! Stop reading and go go go!!!
Posted by TexasDeb at 9:27 AM

That's a Kershaw Shun knife, right? We have several and they CHANGED our cooking lives! What a nice son you have. Recipe sounds great!

It is (good eyes, Iris) and I do have a nice son. Very nice.

The recipe is absolutely killer if you are a broccoli fan (and I totally am).

The knife is a treat to use. I can see this will make a huge difference in what I tackle from here out. Having a proper knife is one of those things I read made a difference and believed it - but wow. Actually having one now? Sea change. I am a total convert.