If I Could Put Time

in a bottle... Ah Jim Croce. I couldn't find a high quality video to embed of his "Time in a Bottle" song - an instant favorite of mine back in the day... You go find a version to listen to if you are a fan like I am and I'll get back to....wait... what was I doing before I spent umpty-nine minutes searching for that video...oh yes! The Bottle Tree! 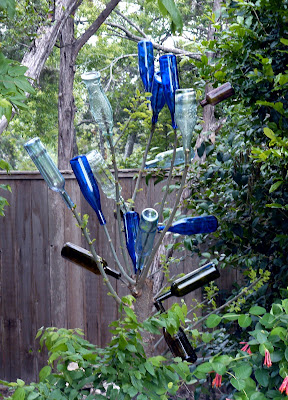 My daughter, who has a nasty habit of being smarter than her Momma, when I was describing to her how I'd repurposed a mostly chopped down hackberry tree into a folk art Bottle Tree in the back of our property (our yard really but "property" sounds much grander, agreed?) gently asked me "But won't the tree limbs just grow and leaf back out?" to which I sagely replied "er....we'll see!".

Well Miss Smartyplants was right and the hackberry tree is demonstrating the persistence of life that has it posing such a threat in the landscape to begin with. 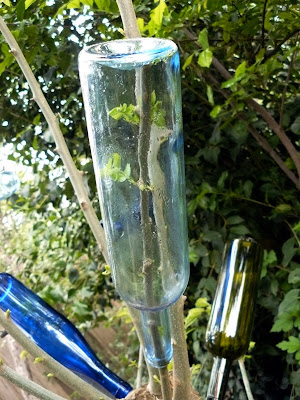 Trying to get rid of hackberry trees conveys one of many lessons that landscaping attempts to teach. 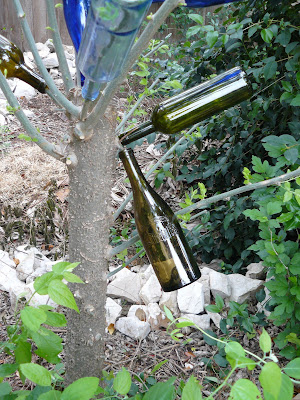 Houston, we have a problem.
Like, the plants you do not want may thrive while the ones you covet will either wither or produce fruit that will end up feeding the bugs who have constant access. 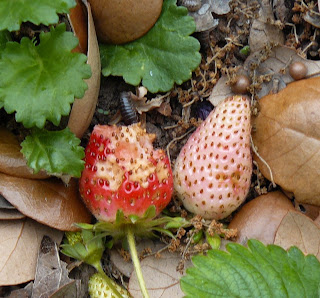 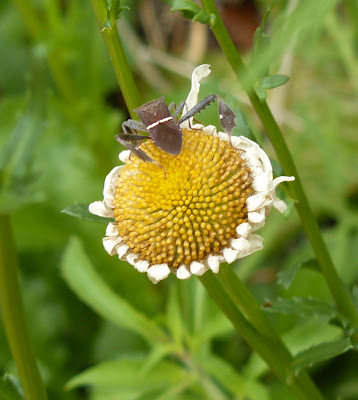 Cue Doris Day.
Or, when an onion sprouts and you plant it a flower will come (that smells like...an onion!). 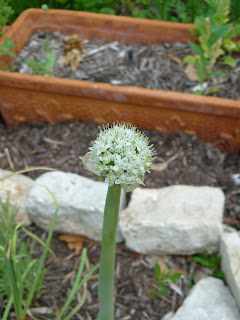 Or, because a plant is called "obedient" does not mean it will do what you say (I told these guys specifically not to crowd out the winecup!). 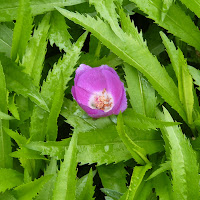 Anyway...my point, and I did have one, is that gardeners make plans while God laughs. As do cooks.

I planted two heads of cabbage months ago as part of a "winter" garden. We are in a severe drought and live in an area with high water rates so secondary to that are trying not to supplementally water much.  It has not been until very recently that the heads of cabbage have come to resemble anything that might be reasonably harvested and eaten.  My cabbage heads are not so much Winter as they are late Spring arrivals.  But arrive they have.

When I decided, due to repetitive cravings for Orangette's Cabbage with Hot Sauce, to get one of those heads indoors today I knew I could not only put that craving to rest over the weekend, but if my timing was right, I could put it into a post as part of a Grow Your Own entry for April. 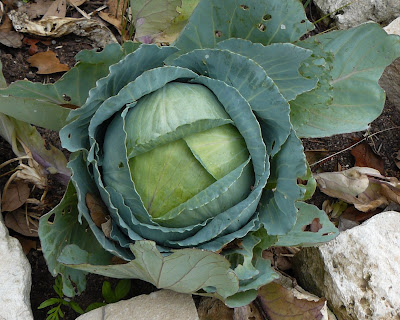 I took my camera out to the garden with me to get a shot of the cabbage "in situ" for the GYO post, and that is when I noticed the hackberry tree had begun to reassert itself as a leafy tree into the bottles I'd so (caff!) artfully placed upon limb ends.

Once I start looking closely at my garden a lot of things happen. My sense of time dissolves, I stop to take a 429th close up shot of poppies whose colors reduce me to silent wonder.  I simply lose track of who I am, where I am, and why I came out of doors in the first place.

Which is precisely what a garden is good for, aside from producing the occasional late head of cabbage.

I'll try to get back with a post that is actually about Cabbage with Hot Sauce. It is a savory side providing one more lively excuse to have eggs for dinner.
As the economy circles the drain while the White Coats signal eggs are not only "not bad!" for us but rather really quite the perfect food the Egg Council maintained all along, eggs for dinner make quite a bit of sense.
Unlike this meandering post.

My time, bottled or not, has gotten away from me for today. I will leave you with this for now:
"The time has come,' the Walrus said,
"To talk of many things:
Of shoes -- and ships -- and sealing wax --
Of cabbages -- and kings --
And why the sea is boiling hot --
And whether pigs have wings.'
Posted by TexasDeb at 7:30 PM

I love love love the bottle tree!
My mother has a purple toilet full of flowers on her property :)

The cabbage is beautiful as well- bah! I want a garden!