It was as if they were watching...

I recently took down a temporary barrier I'd placed a year or so ago to protect a sumac tree I transplanted into the ground after it became root bound in its pot.

Why the barrier?  I took the sumac from the enclosed back yard and planted it in a spot in the beds out front, where it would get good sunlight but was vulnerable to browsing deer. 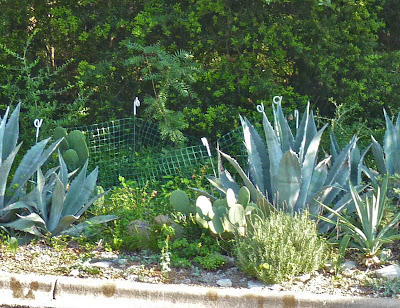 I considered leaving the barrier up for another year until the sumac got a little taller.  We were all tired of looking at it though, so I took it down.  I'd rather not even try to have a sumac there if it means our view must include that green plastic barrier.

I'm optimistic the tree is well established enough, a year later, to withstand the inevitable ruminant pruning.  Because most of the time, deer don't kill my plants outright.  They simply eat most of what they've targeted, leaving a remnant to grow seconds. 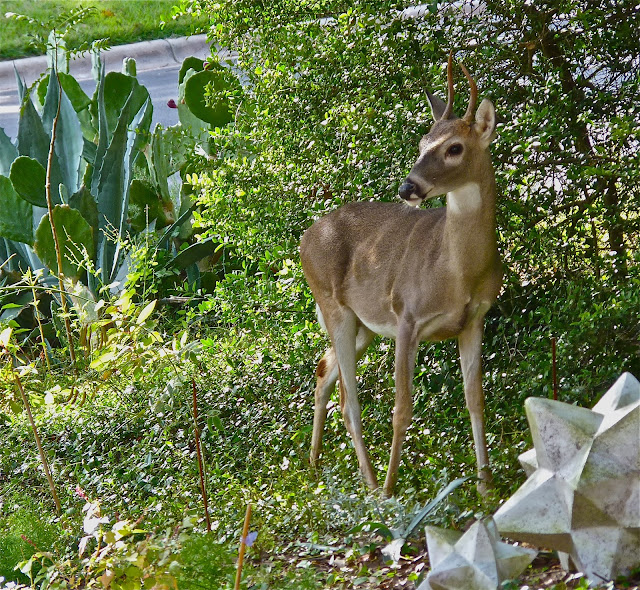 This afternoon as I went out to get the mail, Bambi was just finishing up and moving on.  Or at least he moved on once I showed up and loudly "suggested" he do so.  What's left of the small sumac is just visible in front of the opuntia and agave in the top left corner of the image.

From fence removal to deer pruning, it took less than seven days.

This little tree has been a tough customer so far.  It will either bounce back, regrow branches and get taller in self defense, or I'll have to try something slightly less deer-licious in that spot.  Talk about a rough micro-climate!

*fingers crossed* It was losing its leaves so maybe it will be fine .... and I'll just keep my comment about just how cute that deer is to myself. ;)

Darn deer. On the plus side, sumac are very tough.

I know, it's not much consolation.

Debra: Bambi was pretty big in the flesh. Maybe I'll allow "noble" or "majestic"? Excepting...when I checked again, some deer came back to finish what he started and now the sumac tree is just a bare gnawed stick. If it grows back I'll be happily surprised. (sigh)...

Tina: You are right about that, gardening here is not for wimps or sentimentalists either one.

If that sumac survives being chomped nearly in half, I'll be ridiculously thrilled. It did get an entire year of no-gnawing to establish roots, so....

BTW--I love those 3-D stars that Bambi was standing by. Are they concrete? Or something less heavy? Very cool.

Deer are at the top of my list of things I'm grateful I don't have in my garden. I hope the sumac recovers, Deb.

Tina: Those stars are made of zinc, reportedly. They are much less heavy than concrete but are one of the few things (besides rocks) out front the deer won't eat. So far anyway. Nothing would surprise me at this point.

Kris: Thank you for your good wishes. I'm going to count on that little tree having had a year to get good roots going and hope it laughs off the recent assault that left it with only a bit of trunk for all our combined efforts.

It is weird how comfortable the deer are living in a suburb. If you transplanted the people in the houses out into open fields, I don't think they'd do nearly as well adapting!

That's so sad ... I feel for you. At least we don't have deer in this garden - we had them previously and they drove me insane.

Cathy: I think I'm over it now. I am currently nursing a more active grudge against all the hours of freezing weather currently forecast in the next day or so. Protect from deer, water through a drought, and what comes along? A polar vortex. Some years I don't catch a break.

Deer are endlessly frustrating. I have a possumhaw holly out front that I've caged from deer since I planted it -- going on 3 or 4 years. I don't know when it will be safe to risk it with the deer, so I haven't taken down the fencing yet. It's a rollable wire rather than green plastic, though, so it doesn't show up quite as obviously. Or so I tell myself.

Pam: Your aesthetic sense is not to be questioned as far as I'm concerned. If you aren't bothered by that fencing? I'll warrant it is indeed not bothersome.

The plastic fencing and supports I have on the other hand, are visually jarring, practical or no. I'm coming to a "if you can't beat them..." point here with deer browsing and antlering as well as armadillo rooting, bird and squirrel pilferage. I'm about finished with circling my wagons...