Have you noticed how weather affects everything?   Especially when it trends towards the extreme.  I suppose this does not bode well for the future, though what does, these days?

Just this past week we've had a string of triple digit days.  Granted, this is neither unusual nor unexpected for July in Central Texas. It is precisely this sweltering summer weather that purchases our guilt free enjoyment of mild to nonexistent winters.  A Mephistophelean deal at best, but it's a fact.  The heat dues we currently offer also earn us reverse bragging rights.

If you are a Texan, please raise your hand if you have not overheard or better yet, personally participated recently in a conversation with out of staters resembling the following: "Oho, so you think it is hot where you are?  We're expecting (fill-in-the-blank-ridiculously-awful-number) as a high today.  And tomorrow it's supposed to be (mind-blowingly-worse)!".

Bragging rights aside, any time we hit the triples for three or more days running? It ceases to matter that I have years (and years) worth of coping mechanisms to employ.

After day two the smothering blanket of heat eventually extinguishes my will to live.  In a puddle of sweat I slide past irritability into dull rage. The ordinary and ubiquitous summertime background clamor of mowers and blowers transform into insufferable personal insults.  I've been known to snap at cicadas to "shut the hell UP!".

And it isn't only me.  My whole family can be snappish in the nicest weather.  During a heat wave, it doesn't take much for us all to get a little murdery around the edges.

I suppose there's an upside. The oven outdoors makes it impossible to gain enough momentum to do more than entertain dark thoughts. Snarliness becomes unsustainable.  The heat saps our energy and reduces our willpower.  We do well to muster juuuust enough strength to lift glasses of various iced liquids to parched lips.

The heat has other side effects as well.  With every cumulative hour the mercury sits above 95 degrees?  There is a corresponding drop in IQ.  Last night, it was too much trouble to bark out the answers to a DVR'ed Jeopardy episode we were watching.  Last night, the three of us sat around picking at our dinners, halfheartedly mumbling guesses to the questions.

For my part it was just as well.  I was embarrassing myself, flubbing answers to even the easiest questions.  A sense of quiet despair set in.  I was trapped on an express bus to Dullardsville. Which is  the precise opposite of the experience I seek by watching. 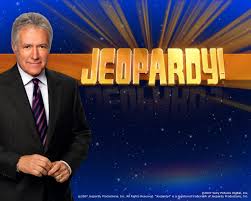 Frankly, I don't watch Jeopardy because I delight in learning arcane facts (lowest point in Australia?  Lake Eyre!).  I'm not there to humbly map out the boundaries of What-I-Know Land or vicariously experience the thrill of nerdish domination.

No, not and nope.  I watch Jeopardy because on a good day, on a usual day, on a day that has not featured cognitive depletion from heat stress, I do know most of the answers.  On a good day, watching reinforces my sense of already being smarter-than.  And that very smoothly transfers to my sense of being better-than.  (Please note there's no pretense having ANYthing to do with being nicer-than.)

When I get more Jeopardy questions correct than, well, anybody I'm around at the time, it assures me that yes, Virginia, I may have stood in front of the open refrigerator (twice!) wondering what it was I was looking for today, but that matters not.  When my Jeopardy watching is doing its job I by golly feel like I AM more intelligent than your average bear, and more crucially to me, smarter than the contestants. Which (at that moment) is all that counts.

We've got cloud cover today.  No triples in sight.  There are colored blobs on radar oozing in our general direction, and as we face a new week and new episodes of Jeopardy, I'm relieved to see the brain-sapping heat is likely to abate for at least a few days.  Which is a very good thing.

Just don't get me started on the humidity....

...or the ensuing mosquitoes. I was in Oregon during our most recent bout of triple digits. We walked out of the airport and my son, a new Oregon Duck said, "Ah, that feels so good!" and I realized I wasn't in an air conditioned room anymore, but outside amongst the cabs and airport shuttles. I'll remind him of our sunshine in January.

Tina: That is one of the most astonishing side effects of air travel (to me anyway). You can walk IN to an airport in sweltering heat and walk back OUT of an airport hours later where you'll notice a distinct chill in the air. Oregon IS quite a switch from Texas - as we discovered when our youngest went to school in Chicago - if you time your visits correctly you can experience the best of both worlds!