Nearly all over (but the shouting)

and it seems the shouting never ends.

The only variable when it comes to the shouting (and by the "shouting" I mean whatever is passing for the daily hullabaloo in the MSM) is the amount of attention I feel obligated to pay.

Recently, that amount of attention has been high, very very high, mostly because (I am admitting it here first) I am obsessively checking the political polls.  Specifically the polls predicting the presidential election outcome.

I suck at waiting.  I have no skill sets to bring to bear.  I am not patient.  I am not willing to sit by and watch idly as something plays out.  Sitting by is not a strength for me.  Meddling is more my milieu.  I do have some idly watching chops to be sure, but those only kick in as I am viewing the results AFTER I have meddled.  Because have I mentioned this before?  I suck at waiting and doing nothing.

Unless the waiting and doing nothing is my idea first.  Theoretically.  I've never had that idea first, much less ever yet in my life, frankly, and now I've gotten this far along in the game I am not holding out hopes for those prospects.  But, back to polls and the election prediction biz.

Polls are only as good as their methodology, in every case the source of the data must be considered, the size of the poll, the framing of the question, the ways data are interpreted, and the leanings of the polling service must all be clearly taken into account.  Then after each poll has been analyzed, a gaggle of polls must be taken into account and their results averaged, and exceptions posited.

That is a lot of work and me being generally intellectually lazy means I naturally rely upon somebody to do all that sorting and sussing out on my behalf.  That somebody this election go round has been Nate Silver, statistician and poll watcher extraordinaire of The FiveThirtyEight Blog on the NYTimes website.  (538, in case it was not immediately apparent to you, being the total number of electoral votes available).

Apparently I'm not the only one out there obsessively checking in for updates.  Today from the xkcd blog site comes this image that pretty much sums it up: 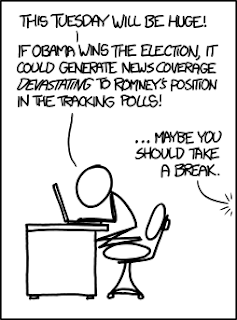 The xkcd hover text for this?  "The choices we make Tuesday could have MASSIVE and PERMANENT effects on the charts on Nate Silver's blog!"

Fingers crossed the polling I am choosing to heed proves to be rock solid.  I want to take a long long nap, wake up with Tuesday on the books, and then?  Let the shouting begin.  I'll be yelling either way.

Yes, the whole business of waiting causes stomach rumbling and distress...When I realized KUT was going to have election coverage instead of Kalectikos (I have no idea how that is spelled!) I had to turn it off and go to Spotify. Our household is split and we have essentially, as in most years, canceled each others votes out. We've managed to remain largely civil with the exception of his feelings being hurt this morning when he found out that a particular candidates largest support base is white males without college degrees and I may have made a certain comment. We'll both be glad when this whole thing is over. Until then I may just have to bury my head in the sand as I just don't have the stomach for it. Anxiously looking forward to Tuesday night, Cat

Cat: I love "and I may have made a certain comment.". Oh, to have been a fly upon the wall.

Our house is not divided this go-round but my brother and I have agreed to focus on our shared support for our mutual undergrad football team (in the context of which we disagree about whether or not a certain head coach should be fired immediately. Or not.)