Little boxes in the Hill Country

Wow, I took my eyes off the calendar for just a minute or two and suddenly, WHAM!  It is October, one third of the way into the month already, and I am sitting here with windows opened wide to welcome cool morning air, listening to the strains of music drifting over from ACL Music Fest.

What with it feeling like all the world converging upon nearby Zilker Park for a kinder gentler version of Fest this year, it made perfect sense to the Hub and I to pile into the car and head the other direction this weekend.

On the advice of Kathleen Scott of Hill Country Mysteries, we set our sights for Blanco generally, and the Redbud Cafe specifically. 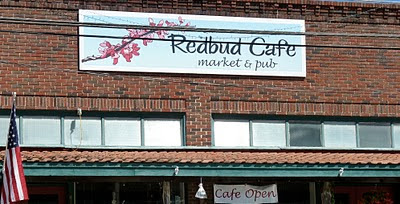 It was a lovely day, a reasonable hour long drive, and the cafe certainly did not disappoint.  In fact, there were only two letdowns for the day, one small and one slightly larger.
The small disappointment for the day was that by the time we wandered in after lunch the highly recommended Deutsch Apple bakery had sold out of nearly every portable potable.  I'd been warned this could happen which made it a little easier to be philosophical at the sight of shelves quite emptied of apple cakes and muffins. I still made do handsomely, bringing home a jar of Texas made apple butter and some of their delicious cookies.
The Big Nasty?   I'll get around to that in just a moment.  First the fun stuff....

We'd decided not to check out the Real Ale brewery this go round, saving that as incentive for a return trip on a Friday afternoon when their tasting room is open.

Instead we headed straight for the Square to check out the Redbud Cafe Market and Pub.  It was everything it was promised to be and more.....
Wandering in, my eye was first captured by a series of large wall displays featuring stenciled rainfall records for Blanco broken down by month and year. 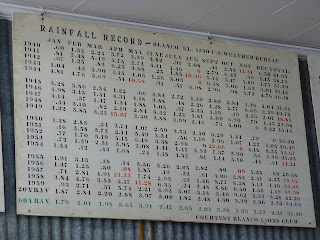 After dutifully checking to see what the accumulations were for the months/years the Hub and I were born,  I turned my attention towards how we'd get our lunch.

Here's the general drill.  You walk in, adjust your eyes, try to ignore the siren song of the pottery and gift shop beckoning through an open door to your right, and wander over to a bakery style counter filled with goodies.

You wrench your eyes up off the bakery items displayed and check out the menu for the day.  A friendly face at the counter will answer whatever questions you have, take the order for your lunch, and then if you are so inclined, guide you around the corner of the counter to your left where the Real Ale beers on tap are located.  The routine repeats, you ask any questions you have, get a sample taste as needed and then hopefully order the perfect cold brew to imbibe while you wait for your food.

We consoled ourselves for bypassing the brewery itself by each choosing a glass of a different one of the four types of Real Ale sold on tap at the Cafe.   The Hub thoroughly enjoyed their Oktoberfest with the Reuben sandwich he ordered that arrived nestled between slices of the most gorgeous marble rye bread I've ever seen.  I blissed out sipping a glass of Full Moon Pale Rye Ale in between bites of the amazing seasonal Pear and Bleu Cheese salad. 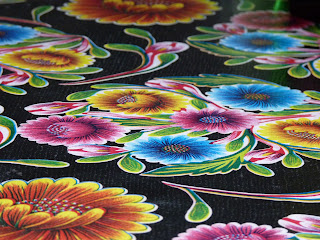 There we sat, settled in at one of several dozen oilcloth covered tables, munching and sipping to our heart's content while we soaked in our well appointed surroundings and people watched through windows looking out onto Blanco's town square.

I gotta admit up front I never expected to see so many gray haired pony tailed men in one place, especially not any place so far out into the Texas Hill Country.  It would appear from superficial inspection that bikers and old hippies have all but colonized the area.  I found that heartening for some reason I couldn't quite put my finger on.
In retrospect, the crunchier than expected nature of Blanco was probably just what I needed to buffer me from the Large Letdown that came as part of our ride back home.
Said letdown being the nasty shock that unfolded before our weary eyes as we took a series of exploratory turns onto smaller and smaller roads on the way back into Austin.  Every twist and turn of the selected county and/or ranch roads we explored made it painfully clear the blight of suburbia has spread in malignant rings far far outwards from Austin.  Developments jammed with houses have become about as ubiquitous (and to my eye as unattractive) as oak wilt.

I've watched the exploding census counts for our area and I guess I knew in my head those developments had to be out there somewhere, but passing through one huge subdivision after another gave made me a little heartsick as I realized how much territory has already been converted from more open spaces.
Yeah, I know, I am beginning to sound super duper geezery here and maybe now you're wondering how long it can be before I start nattering on about how great it was when sliced bread was 40 cents a loaf or moaning about my childhood trials walking barefoot to school through the snow, uphill both ways.  I promise I get it.  Growth inevitably happens and it isn't always awful.
I'll even admit to you the Hub and I both kept having our eyes and imaginations captured by For Sale signs offering acreage all along the road between here and there.   We pretend it wouldn't be any different for us to move out to the country.  That the house we might build or renovate would be greener and lovelier.  That our wanting to live away from the hubbub is an impulse totally removed from whatever brought all those other folks into their houses crammed into the hills surrounding Austin.
Maybe what we want is something different, maybe it isn't.  Nevertheless, knowing there are a bunch of folks out around Blanco letting their freak flags fly?  It is just about the perfect antidote to offset the impact of all those little boxes marching up and down the hills outside of town.

There's a pink one and a green one
And a blue one and a yellow one,
And they're all made out of ticky tacky
And they all look just the same.

And the people in the houses
All went to the university,
Where they were put in boxes
And they came out all the same,

And there's doctors and lawyers,
And business executives,
And they're all made out of ticky tacky
And they all look just the same.

And they all play on the golf course
And drink their martinis dry,
And they all have pretty children
And the children go to school,

And the children go to summer camp
And then to the university,
Where they are put in boxes
And they come out all the same.

And the boys go into business
And marry and raise a family
In boxes made of ticky tacky
And they all look just the same.

There's a pink one and a green one
And a blue one and a yellow one,
And they're all made out of ticky tacky
And they all look just the same.


Words and music by Malvina Reynolds; copyright 1962 Schroder Music Company, renewed 1990. Malvina and her husband were on their way from where they lived in Berkeley, through San Francisco and down the peninsula to La Honda where she was to sing at a meeting of the Friends’ Committee on Legislation.  As she drove through Daly City, she said “Bud, take the wheel. I feel a song coming on.”
Posted by TexasDeb at 4:39 PM

Hi Deb, I'm glad you enjoyed the Redbud. Great post! Your pictures were so much better than mine. Want to go on my next research day and do the photography? With photo credit, of course.

Too bad about Deutsch Apple Bakery...I guess you'll have to go back (early--if you had apple cake with coffee, you'd be justified in calling it breakfast, right?) Or you can get slices to go. I wouldn't have the willpower to wait, myself, but you're probably made of stronger stuff.

I know what you mean about sprawling among the hills. And about wanting to be farther out. Our plot is part of an old ranch. The charm is in the wildness. But I won't feel that way when townies move out and bring a desert of St. Augustine lawns to the acres around us.

PS Thanks for the link to Hill Country Mysteries!

KS - You are so welcome for the link - I am grateful for you bringing this treasure to my attention.

Thank you for putting up with my side rant. I really needed to get that out of my system. So far it sounds like your neighbors are not of the St Augustine desert variety. Hope it stays that way. Ours is the only non-lawn front on our street (so far!) but I'm hopeful to make converts every summer when it heats up and we have zero mowing chores to futz with.

Okay, this is embarrassing. I'm a native Texan, and I don't think I've ever been to Blanco. Maybe through it but not in it. Your delightful post makes me want to check it out! Plus I love Texas courthouse buildings!

Iris no need to be embarrassed - it was my first visit TO Blanco and I never even made it into the courthouse this go round. We do plan on repeat visits so no reason to try and see it all in one afternoon was our approach.

Now we realize how close it really is in combination with the assurance of a great place to grab a meal, Blanco just became a LOT more interesting.

And yes - thank you again to K Scott for pointing the way.