Late to the game

There are times when I consider myself an early adapter, fearlessly leading the way.  There are other times when I remain firmly planted in my chair, ducking behind my screen while I watch and wait to see how a process or technique will turn out for nearly everybody in the known webiverse before I'll try it.

Kale chips have been absolutely everywhere recently.  Over the past six months I am fairly certain I've seen some version of a kale chip recipe on nearly every food site I visit with any regularity. 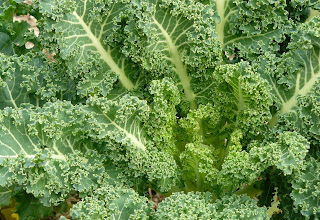 I remained unmoved.  Skeptical it could be so easy to trick entice my family into eating kale in any form.


I'd had kale in my garden for weeks now, but honestly, had been hesitant to use it much.  I keep reading how some people absolutely love it while others (and I harbor some concern several of us might fall into this category) find it too assertive tasting.
There are people out there who like arugula but can't quite bring themselves to eat kale.  Folks around here are not even huge arugula fans (except for me - I can't get enough of the stuff).  ChefSon likes kale, sure, but he'll eat nearly anything these days as long as it is well prepared.
How positive could I reasonably be that the kith and kin I regularly cook for, picky eaters one and all, would warm up to kale?
I think it was after reading 943 comments from Moms who swore their pickiest kid eaters simply love-love-LOVE eating kale when made crispy and salty, that I was finally ready to take the plunge. 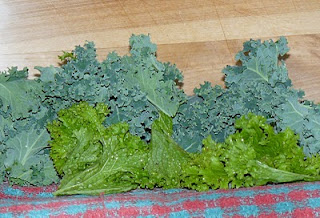 Be it so resolved:We will hereby eat some kale and that kale will be in chip form.

Still, enough time had to pass I could determine if any unfortunate aftereffects might develop from enjoying greens rendered into a slightly less healthy yet decidedly more fun snack food.  ("Could it be true that those "healthy" kale chips you've been feeding your family have actually been lowering their IQ?!  Harming their standardized test scores? Every parent needs to watch our late breaking story as KFUD undercover investigators reveal the secret the kale industry is desperately trying to hide.   Film at 11...").

So I waited.  No other shoe dropped.  No downside developed.  Pressure mounted for the AustinAgrodolce household to finally at least try a batch all our own.

With some teensy bit of trepidation I preheated my oven to 300 degrees F. 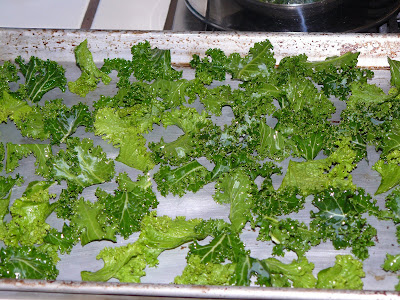 I harvested some kale, took the tough center ribs out, washed and dried it.

I put it in a bowl, sprinkled in a tablespoon of olive oil and tossed (and tossed and tossed) until at least some oil showed up on part of every leaf.

I spread it all out on a baking sheet, then sprinkled on some kosher salt.  Realizing how I've been accused of working for some sort of salt hoarding secret society of late I took a deep breath and salted some more. 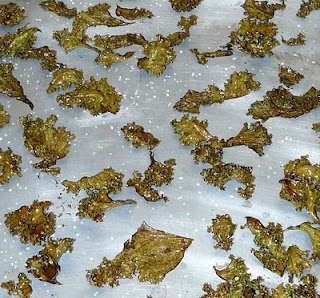 I popped the pan into the oven.  The recipes I've seen typically have the chips in the heat for about 20 minutes.  Some suggest stirring halfway, others do not.

At about 15 minutes I began to smell my kale pretty distinctly so I checked and decided my chips were ready.  I used a very curly kale variety and think that may have hastened the process a bit.

I waited for a minute to let the chips cool and tried one.

I have to say - I am intrigued by the way these chips melt in your mouth. I really like the earthy taste combined with that initial crunch and then the salt finish.  I think they are almost meaty tasting.  I'm pretty much an instant convert here, folks.  Now I realize how easy these are I am fairly sure this technique will be a repeater for me even if nobody else cares for kale chips at all.  As a matter of fact I am not entirely sure some part of me hopes nobody else will like these so they can be mine!  All mine! 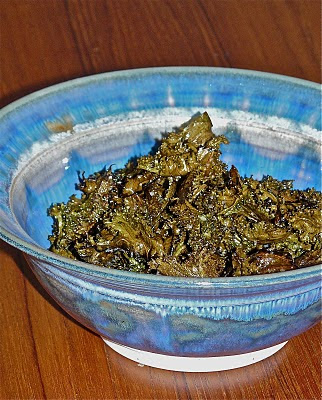 The rest of the jury is still out (asleep and/or out of town).  Will my pickiest of eaters go for Kale, The Chips?  Stay tuned....

PS - if you've seen kale chip making all around the internet and yet remain a bit on the fence as to whether or not you want to try them?  I say go for it.  This is easy and quick enough to try that even if you don't particularly enjoy the results I doubt you'll resent having at least given it a shot.  One particularly inspired use for leftover (ha! as if...) chips is to crumble them over popcorn.  What's not to like about that?  Crispy chippy bits on popcorn!  Double yum.

Now I find myself eyeballing the rest of the greens in our garden and wondering.  If kale tastes this good then what about oven crisped arugula chips?  Collards?  Broccoli greens?   Nothing may be safe from a run in the oven after today.

Thanks for being the guinea pig, Deb! I haven't tried my hand at kale chips yet, but I shall now. My kale's bolting, but there's enough left to salvage for this experiment.

Mine is bolting too Iris - as is nearly everything else in my garden just now. At least the bees are happy.

I cut the center stems out of my kale in an attempt to keep it leafing out longer. Hope you like the chips as much as I do!


randy's kale is outta control...
he and his roomy have pretty much let the garden go, so it is now over my head! wow-ee!
i mostly feed it to hunny bunny, but a pal requested a batch of chips next week so i'll be makin' more.
glad you liked them!

I've never heard of kale chips, Deb. And I was dubious about this...but we love roasted broccoli and cauliflower and brussels sprouts, particularly the little bits that get krispy. I'm pretty sure that some of the gigantic sacks of CSA greens in my fridge are kale...sounds like an Elite 8 snack for sure.

PPastry, you did indeed tell me so and you (and everybody else) were so on the money with this one. I am so happy to have finally tried them.

Kat: If you like the stray roasted brussels sprout leaf "chips" from roasting (I peel off loads of them accidentally on purpose) you will enjoy kale chips, no question. Just try a few kale leaves while cooking something else perhaps and see for yourself.

Hi Deb, thanks for your comment on the Shepherd's Pie. I had to smile, you nailed it...I'm on antibiotics now too. But Harry is MUCH better, Denny has turned the corner and I'll get over this in a week with drugs and jalapeno chicken soup.