When most folks have already put themselves on some sort of purification regimen, or at least instituted a cream and butter taper, we are still rocking the rich foods.

Because is it the Hub's birthday on the third day of each new year. 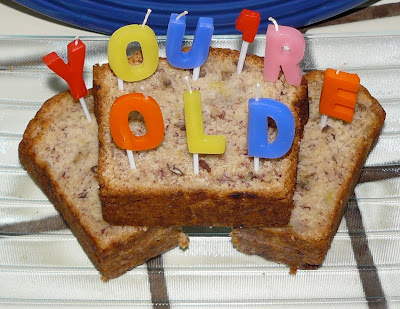 Cognizant of a lifetime of anti-climactic celebrations with a natal observation following so closely on Christmas and then New Year's Eve, I have made it my goal, nay my QUEST, to assure my husband gets a full on, pull out the stops birthday.

This year we knew we would have a scattered series of celebratory events throughout the season, and all for the same reason. Folks in our family work in health care and the food service industry, neither of which automatically takes a day off. Ever.

So between a several day to week run of broken up holidays, this season we ended up trying out not one but three new appetizers. Beating the odds, every one of them was a smash hit in its own way.

For those of you who are tantalized by the zesty and offbeat? I offer you the Rustic Rosemary Lemon Tart from the folks at Fine Cooking. 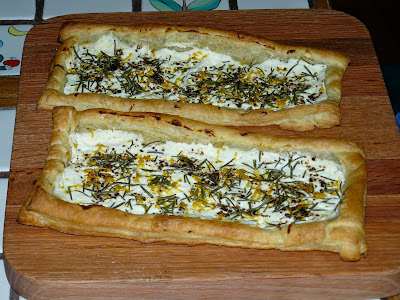 A compilation of Meyer Lemon zest, goat cheese and fresh rosemary leaves (all but the cheese and pastry sheets coming from our own gardens), it is fresh and rich without being heavy. I was concerned the rosemary would be overwhelming but such worries were totally unfounded. Turns out fresh rosemary leaves baked on top of a bit of goat cheese are wonderful and rosemaryish without being at all boorish about it.

Next up for those who are more into mushrooms, I suggest creamed mushrooms from Smitten Kitchen. 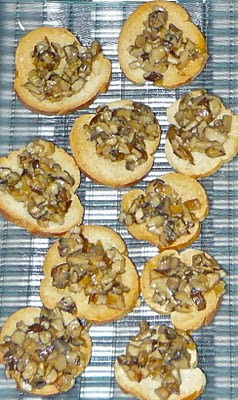 We made a half recipe so as not to end up with too many leftovers, and once we'd tried these, were disappointed in our supposed foresight. These are easy, quick, and yet offer a satisfying flavor that would suggest more time and attention went into them.

Finally, we had a slight redo of a walnut pesto recipe I'd spotted, also from Smitten Kitchen.

I know folks are firm walnut fans and they have their reasons, but being a Texan through and through I remain firmly convinced that just about anything a walnut can do, a pecan can do better.
With a large bag of toasted organic pecans already in the refrigerator, it was a no-brainer I'd take this cinchy pesto and do it up Lone Star style. 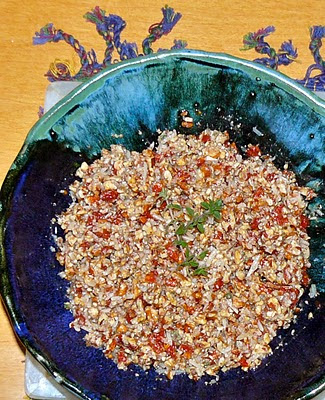 A processor does most of the work and about the only effort you'll put into this one is restraining yourself from finishing it all up before you offer it to friends or family as originally planned.
Or hell, post-holiday restraint be damned, just make a batch, toast up a baguette, open a bottle of white wine and settle in for a truly palate pleasing evening all by yourself.

Aside from my stubbornly substituting pecans in for walnuts in the pesto, we prepared each recipe as is. I gave you links to the original posting sites so you can travel over and enjoy the ambience while picking up the instructions for these road tested goodies.
I promise you, the most difficult thing you'll clear for any of these three treats is to share them generously. They are that good. And that easy. Win/win.

Bye for now. I hope you are enjoying these first few days of the year and if you are not? Then run to the kitchen and make yourself something wonderful. And that's an order!

I haven't yet made any of this post's ideas, but I DID make a version of your MOST EXCELLENT creamy mustard sauce, which I slopped onto some baked salmon and any side veggies in the vicinity. (I just subbed fat-free Greek yogurt for the sour cream and added a small squeeze of fresh lemon.) It was yummy, and I have some leftover for sandwiches, etc--thank you!

Great idea Iris (the Greek yogurt I mean). I have some of that sitting in my refrigerator and now I believe I know precisely what I'll be doing with it.

In case you'll be watching a certain football game Thursday (HOOK 'EM!) perhaps you can give one of the these small bite dishes a whirl. They'd be just right in front of the television....(especially if your team is playing well!).

Can I come to your house for MY birthday?

Love the look of these appetizers. They're perfect for our monthly women's dinner group. I printed out the pecan pesto and rustic rosemary tarts. I've got rosemary, lemons & goat cheese so I only need puff pastry. And the girls get together at my house next week...

PS The You're Old picture is too funny.

Kathleen: I'm still not sure my husband was amused at the candles.....so I'm gratified you liked them at least.

Enjoy the appetizers with your group - they were dangerously easy and each one delicious in its own way. I hold it as a Truth of Life that wonderful food shared with good friends holds zero calories.

So THIS is where you are hiding.
Keep on waiting for a new gardenista post and forgot about your kitchen life.
I find myself wondering about the state of your roasting tins as displayed in the header: Do you clean them in real life or are they scrubbed in photoshop, like I do my sink pictures?

I don't have photoshop Jo, but what an interesting idea - cleaner living through software! I keep looking for me in Gardenista too, but so far I've only gotten plants uncovered and hands wrung over the need for rain, no posting there. But you knew that....

Thanks for hunting me down!