In what was to prove a significant rookie error decades ago, I agreed to schedule the Hub's and my wedding ceremony in late December, over what was then his Christmas break from med school. I was a bit giddy with it all actually, so perhaps I could be forgiven for not understanding at the time that having our anniversary fall between our two mother's birthdays, not to mention just prior to Christmas followed shortly by the Hub's early January birthday would create an ongoing celebrational identity crisis.

Adding to the fun, perhaps I have not mentioned here how tricky Hub is to shop for gift wise? Planting a third gift opportunity proximal to both Christmas and his birthday was just plain dumb on my part. The ongoing gift idea distribution angst I experienced in the years that followed? I have nobody to thank there but myself.

And eventually the coup de grace was revealed. We got married during a commonly observed school break. This means, lo these years (and years!) later, when it came time to celebrate our anniversary as empty nesters, our nest was temporarily full again. Come late December, all absent students return home for the holidays. D'oh!

That last bit I mention just for effect. It really is not a downside. I love having my kids around, wedding anniversary or not. And yes, LawSchoolGirl is currently back in town. Which I am tickled three shades of pink over. So it turns out the Hub and I were observing our 35th (yes, yes, I got married when I was negative 12 years old) wedding anniversary this past weekend and as these things happen, the Hub was on call for a busy emergency room.

With no way to guarantee an uninterrupted meal time, we'd planned to celebrate our big day with a a nice quiet steak dinner at home. Including all available family members. In this case, since ChefSon was working, that meant LSG would be joining in on the fun.

LSG stated she felt a bit like she was horning in (although I promise you boys and girls, once you get to anniversary number 35, if you've been trying even a teensy bit you've already covered the Wow! bases pretty thoroughly). To alleviate that she proposed she would take over the major cooking duties. And in typical LSG style, as her gift to us, she upgraded the extremely simple menu I'd originally planned.

The first to fall was grilled steak. LSG had pan cooked steak at ChefSon's since she'd been home this year and was determined to share the technique. I had previously voiced my all too typical resistance to trying something new when something familiar was already appreciated. However, since LSG would now be doing the cooking she had the chance to gracefully overcome my objections.

It was decided: to top our dinner menu, pan cooked steak with a beurre rouge jus (and yeah I may be taking liberties with the French but come on....it is our anniversary dinner!).

Next to go were the horseradish mashed potatoes. LSG likes horseradish and she likes mashed potatoes, but she was feeling ambitious. A bit of an internet search produced a recipe for a horseradish gratin that got rave reviews on Epicurious. A quick check to see we had requisite ingredients on hand and et voila! Horseradish Gratin it would be.

I went out to harvest thyme for the steak and potato dishes, and while I was out there in the garden beds anyway, secured arugula and baby lettuce to add to organic romaine from the store for our dinner salad.

I'd already purchased a tiramisu cake (Hub's favorite hands down) and a nice Prosecco for toasting. I decided I'd make a Prosecco vinaigrette for the salad and before you could say Bob's Your Uncle! our Very Special Anniversary Dinner Menu courtesy of Preternaturally Talented Guest Chef LSG, was complete.

The gratin turned out to be pretty simple to put together.

We halved the recipe, figured out our substitutions, gathered our ingredients, and away we went. We assembled our mise en place. 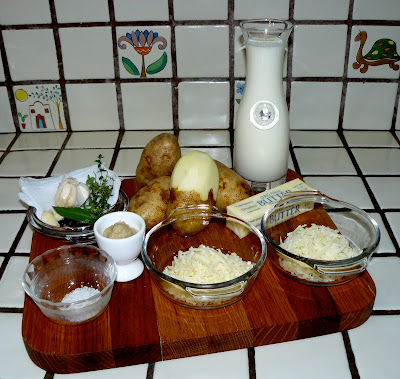 I showed LSG how I tie bouquet garni 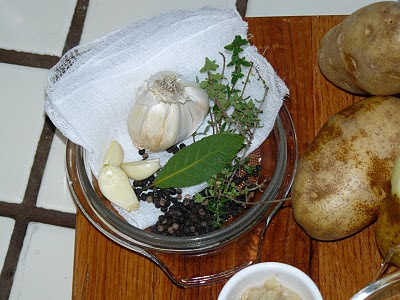 We carefully sliced the potatoes 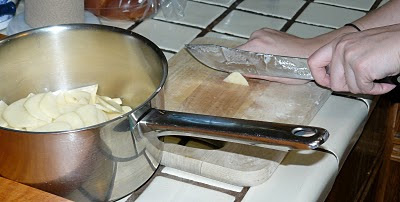 LSG cooked them in cream until just tender 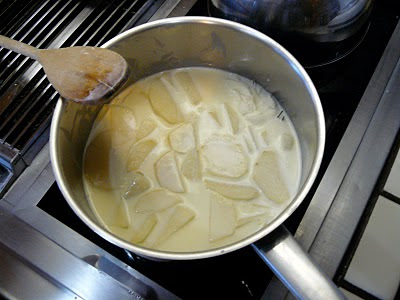 Once the garni was removed (we put our garlic in the garni proper since in the comments section for the recipe site people stated they'd run into trouble removing the garlic which was the same color as the cream in the pot) and the potato cream mixture was placed into a buttered shallow baking dish, LSG sprinkled on the grated cheese 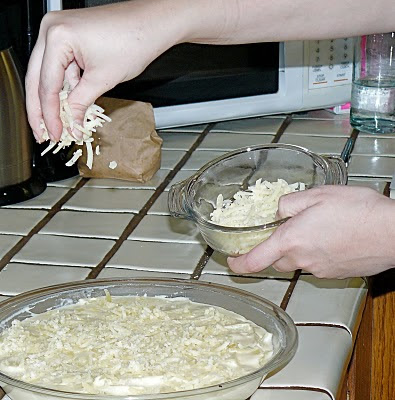 She baked it for 30 minutes and then checked for color. It was gorgeous! 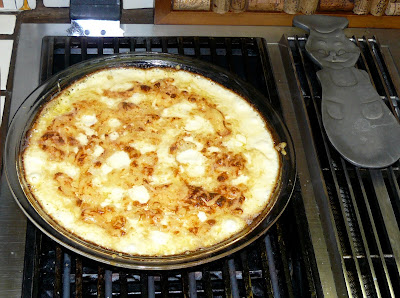 Addendum: Here is the recipe as we prepared it, just to be friendly...
Potato Gratin with Horeseradish and Parmesan [printable version]
adapted from Shaw McClain's Yukon Gold Potato Gratin Recipe for Epicurious 10/06
1/2 bunch fresh thyme
1/2 tbsp fresh black peppercorns
1 bay leaf
2 garlic cloves, peeled and smashed with back of knife
1 1/2 pounds potatoes peeled and cut crosswise into 1/8 inch slices
1/2 tablespoon sea salt
2 cups heavy cream
1/8 cup prepared horseradish
1 cup Parmesan cheese, coarsely grated
Place a rack in middle position and preheat oven to 400 degrees.
Generously butter a 1 1/2 gratin dish (we used a deep dish pie plate).
Make a bouquet garni with first four ingredients.
In heavy 3 saucepan combine potatoes, bouquet garni, salt and cream. Set over moderate heat and bring to a boil. Reduce heat to low and simmer uncovered until potatoes can just be pierced with a fork (begin to check at 10 minutes).
Take off heat. Remove bouquet garni and discard. Stir in horseradish.
Spread potato mixture in buttered dish and sprinkle with cheese. Bake until top is golden brown and potatoes are tender, 30-40 minutes. Let stand 15 minutes before serving.
I chose not to share photos of the finished plates in toto, but I rush to assure you the gratin recipe was amazing and lived up to several reviews where folks stated though they were full from their meal, it was hard to resist standing around polishing off the remainders. This dish tastes that good. The pan cooked steaks were done just to medium rare, and the herbed buttery red wine pan reduction sauce elevated every morsel to perfection on the plate.
Last to appear was the tiramisu cake decorated with fresh cut flowers, one for every decade (old! I am so old!) we've been married.

A hint from an old married lady who has decorated many a cake with flowers through the years:If you want a cake decorated with fresh flowers to be a uniformly pleasing experience, be sure to use pieces of masking tape or thoroughly coat the cut end of the flowers with melted wax. If you use wax, let it sit until it cools and you can see you've achieved a good seal. This assures the stem does not stealthily share anything indigestible with your cake surface that will eventually find its way into the mouths of your dinner guests. 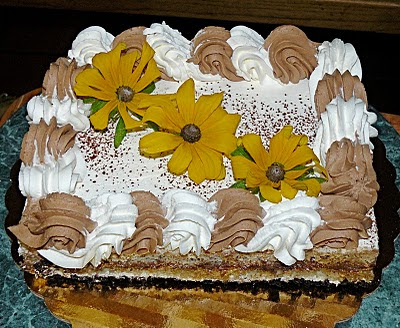 See? Pretty enough to eat and safe to boot so your guests will live to properly thank you for your thoughtfulness.
All in all a meal to remember, with not one but two new recipes to relish repeating. Let it never be said that having talented grown children around to help their parents celebrate anniversaries is anything but a gift all its own. I am so grateful for my son and my daughter, both of whom are the shiniest reflections of 35 years of marriage I could ever imagine.

Folks, this will likely be the last blast from these quarters until after the holiday hooraw has settled. I do have plans for all sorts of familiar treats to have on hand for our Christmas day gift sharing feasting.... Crock pot chili with corn bread the night before, a routine developed years ago to accommodate last minute shoppers and other schedule crunches. Day of, Cava Mimosas, Egg Nog, sausage kolaches, banana bread, sausage cheese balls, spiced glazed nuts, Monte Cristo bake, and tortilla soup. That should be gracious plenty to keep body and soul together while our sensibilities are busy being delighted by Santa's efforts on our behalf this year.

It will be lovely. Fun and funny and amazing because it is all of us, together, doing what we do best. Eating and drinking while enjoying each other's company. I hope for nothing less for all of you, a wonderful celebration in whatever way you do it best. Happy Holidays to each and every one. See you next year!
Posted by TexasDeb at 8:29 AM

Happy belated anniversary! The gratin and steak dinner sounds so good, especially since LSG's love was in the preparation.

Your Christmas plans sound just perfect. (The rest of my family's food and drink tastes aren't very similar to ours, but I'm up to the challenge of cooking some side dishes we can all enjoy.)

And aren't you glad you've got everyone home with you and won't be traveling? Cheers and peace, Deb.

Thanks Iris. Having watched your house renovation and knowing what I do about your garden (not to mention your libation recipes!) I am confident your side dishes will wow the crowd. This one, in fact, garnered folks lots of praise on Turkey Day. Let me know if you try it and what you think.

Merriest and Happiest to you and yours. Travel safely if you go visiting. I know you will always look for the joy in it all which means you will likely find it. Hope to see you back soon.

happy anniversary and happy hollydays and happy mother-daughter bonding!!
i'd love love love some of that gratin right about now.

Happiest Hollydays to you as well PPastry. Enjoy your time with your family and we'll be watching Austin brighten back up on your return!

Congratulations on 35 years and a happy family! Health and happiness beat anything Santa can bring.

That gratin recipe looks sinfully good. I printed it out for my next anniversary (2 CUPS of cream...will have to wait for an anniversary but I'll be happy in the waiting).

Have a wonderful holiday. And if you can, afterward, post the steak recipe too. Call it your readers' Christmas present.