OK I admit it - I am a week early with my sentiments. But today was one of those days on the interweb when one thing simply led to another.

I was blogging about January being Soup Month yesterday which had me thinking about the delicious WonTon Soup recipe I'd tried out from Jaden Hair over at Steamy Kitchen that was such a big hit around here. I have ingredients on hand to crank out another batch. If all goes well today, I hope to prep the wontons ahead to feature in tonight's dinner.

Jaden's site is one of several I subscribe to. Whenever she has new content posted I get an email alerting me so I never miss a recipe. 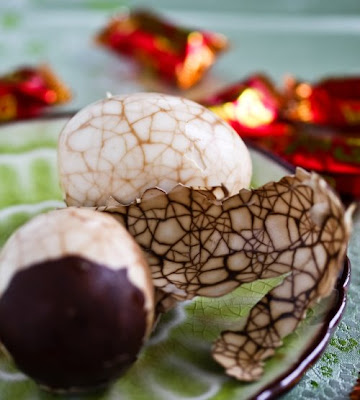 The most recent email I got involved a recipe she is featuring for Chinese Marbled Tea Eggs (photo from her website), a treat she shares prep information for so we can all get ready for the upcoming Chinese New Year. Gorgeous, aren't they?

This is a Year of the Ox, and because Chinese years weren't always numbered but rather follow a more cyclical pattern, different sources begin numbering in different sequences, so depending on who you go by, this will either be Chinese Year 4706, 4707, or 4646.

Sidebar:I hereby declare I will now calculate my own chronological age according to my (loose) interpretation of the Chinese system meaning I may declare myself to be variously 15, 16, or 55 years of age. This will lend a whole host of new meanings to the term "act your age" which I intend to employ to my advantage from this day forward. So let it be written, so let it be done. Back to Chinese New Year.

At some point Nian was supposedly frightened by a child dressed in red, at which time the color red became "lucky" and was widely used in celebrations. A group of Buddhist monks finally tamed Nian to be their mount (don't mess with Buddhist monks!) and the observations evolved to a tamer family gathering, called a "reunion dinner" supplemented with gestures and ceremonies all meant to bring good fortune to the celebrants. 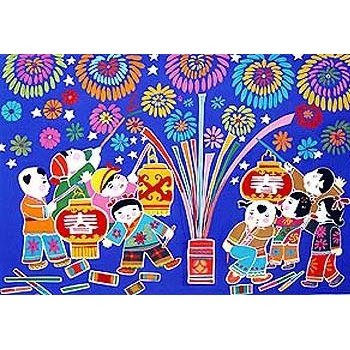 Children who bow and behave appropriately respectful to their elders get "red packets" filled with money in denominations meant to bring luck and good fortune. Various traditional dishes are prepared, fireworks are set off, and some families engage in a search for a perfect plum tree (not all that different from that perfect Christmas tree) that will be planted and decorated as part of getting the year off to a good start.

We aren't allowed to set off fireworks but plum trees do pretty well here in Central Texas. According to one site, the varieties Morris, Bruce (shown in photo), and Methley are especially well suited to our area. Plums will bear both blossoms and fruit, so why not get your year of the Ox off to a good start and plant a plum in your garden?

Another way to celebrate locally is to check out the Asia Market. According to many Austin natives, the most authentic Asian restaurant in our area is the Asia Cafe in the Market, located at 8650 Spicewood Springs Road. 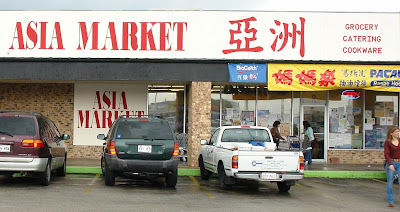 Whether you go to eat in the Cafe or to shop for ingredients for your own Chinese New Year Reunion Dinner dishes, the Asia Market is an inspiring spot. ChefSon discovered that for himself as documented in this post he wrote about some fabulous prawns he found there.

And you are not all on your own past putting together a menu for your Chinese New Year gathering. This China Sprout site is has a wealth of decorations and favors, inexpensively priced, all to help you bring a little China into your home.

If after you consult your Chinese horoscope you decide cooking something along the lines of this recipe for Pork Dumplings for a crowd is not in your stars,

you can always make reservations to join the Chinese New Year's Party at Kenobi Sushi Bar and Restaurant.

On Wednesday, Jan 21st, Kenobi [located at 10000 Research Blvd. in North Austin] will hold the "largest and most impressive event of its kind in Austin, to tribute to this tradition, as Chef Valentin unveils his new Japanese-fusion menu for Kenobi guests." To make reservations for the Chinese New Year celebration, call (512) 241-0119, or visit www.KenobiAustin.com.

"Chef Valentin will prepare a special four-course Chinese New Year table-service menu ($40 per person) featuring such tempting dishes as Asian Buckwheat Noodle Salad, a choice of Maguro Crudo or Sakana Cylinders, and a choice of Smoked Chilean Sea Bass or Asian Coffee-Rubbed New York Steak. For the fourth course, Chef Valentin will entice guests with a mini trio tasting. Diners may also opt to pair their feast with a selection from Kenobi’s impressive sake menu, or, for an additional $12, toast the New Year with a variety of premium Japanese sake flights."

So there you have it. It has been quite a trip past a simple reminder that January is Soup Month, but it has been fascinating all along the way. Now we can all be prepared with lots of whatever we'll need to get this Year of the Ox off to an auspicious start. Considering a lot of the rest of the news lately, that might not be such a bad idea, either.

Happy [early] Chinese New Year, Y'all! Have a great Year of the Ox, won't you?

Addendum: Keep an eye out this week for more Chinese New Year's Recipes from Jaden's Steamy Asian Kitchen. Today? Hundred Flower Blossoms from her Mom.
Posted by TexasDeb at 9:44 AM

those are gorgeous eggs.

They are gorgeous, aren't they? And you unveil their beauty as you peel them to eat, which is a sort of nihilistic process that weirdly appeals to me.

I am going to make some of my own eggs today and hope they will be as appealing (sorry! could NOT resist) as Jaden Hair's. Thanks for stopping in, Bee!