One of these things is not like the other

You see, this is a chief reason people who are trying to "eat light" or "eat healthy" or "eat right" - whatever positive euphemism you want to call your diet - this is why we get so very, very discouraged.

You take this box. It looks pretty good. The chicken portion is decent, not too large, not miniscule. It is sporting a deeply colored rich looking glaze which promises something other than the too typically dried out tough microwaved poultry pieces many frozen entreés rely upon. 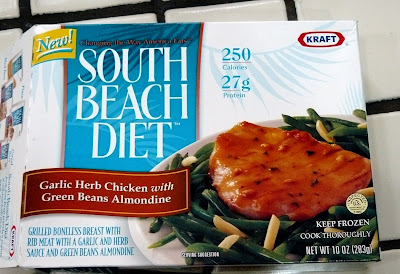 The green beans are nice, thin, delicate even, sprinkled with almond slivers for interest.

Overall, not a bad looking meal, going by the photo. As we eat first with our eyes, I am already halfway into this.

Then come the stats.

Oooh, you got me going, now! Moist chicken and a good sized portion of tender green beans, what's not to like? And when you open the box, more good news, the box is compartmentalized so your meat/glaze has one side while the green beans/almonds have their own little nest on the other side.

Sidebar: That is one of my daughter's primary complaints about most frozen entreés. She is one of those people who likes it when each part of her meal stays in its own place, never mingling pieces or juices unless, or until, she deems it appropriate. She is the kind of gal they invented those plates with the ridges to keep the sections separated for.

So this packaging concept would make her happy.

Once I opened the box, about one third of the green beans had apparently exchanged angry words with the remaining two thirds of the beans and had migrated in a huff over the divider to the chicken side of the box.

So when I reached the halfway cooking point and was instructed to "lift the film off the box, stir the sauce and spoon it over the chicken", I hit my first snag.

I faked it, but even so, what I ended up with, even after sorting things mostly back where they belonged (that sauce wasn't going back in its compartment so I didn't even try) was a dish that looked like this. 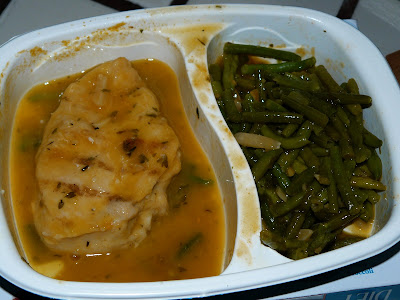 Now, take a gander at the photo on the box one more time.

And then look again at what I ended up with.

Everything tastes ok. But just ok. The chicken is moist, the sauce, well. I am glad the sauce is not particularly strongly flavored because did I mention it spread everywhere? The beans are, not too sucky. I liked the almonds.

This sort of bait and switch is precisely why people who are trying to eat healthy often lock themselves into a closet with a quart of ice cream and a spoon and keep eating until the screaming noise in their head stops.

The outside of the box says to you "eating healthy is a good thing, you are a good person for eating this, you will not suffer if you buy this product - just LOOK!".

The inside of the box says to you "you are a total loser for being too heavy and having no self control and having to eat this instead of a nice lunch consisting of real food. This is your punishment for taking up space and using up the air the skinny people might need later to breathe in deeply after they exercise the second time for today.".

I was actually hungry when I opened this box. I didn't finish it. That nearly never happens. So yeah. If I bought a bunch of these? I would totally lose weight. And eventually probably my will to live.

this totally made me laugh out loud and sigh in recognition (and second the loss and will to live. and for me it would mean I zippppped to kerby lane stat for pancakes)

It does work the other way too. Check out those blogs that compare photos of fast food to the real thing. I despise microwaveable food tho.

Ohhh mmmmm Kerbey Lane pancakes. You are absolutely right Miz, those puppies ought to be standard issue in hospital ICUs to encourage people to want to continue to live.

Shannon I'll be honest - I do not despise microwaved food - I think having something all hot and ready to eat in a few seconds/minutes is the BOMB.

But you are right - there are some foods that suffer mightily due to the nature of the way those ovens heat things up. Soggy hot nachos? Ick and double ick. An 8 minute cooked potato? Yeah baby!

i have thought about doing reviews of microwave meals since i live off of them quite often...
have you tried any lean cuisine meals? they really do have some mighty fine ones... with crispy fresh-ish veggies and all.
the butternut squash ravioli are freakishly good in my opinion, and the snap peas actually snap. :)
annnd only 7 weight watcher points! yeah!
(i'm writing this in the morning and getting hungry, sad.)

95% of the people in my office eat frozen dinners every day - and we have a FULL kitchen in our office!

My daughter doesn't like sauce in general, so this would have totally freaked her out!

Ppastry: I do eat my fair share of Lean C meals. I agree they are a cut above. My attempt at the South B meal was to see if I could spend less and get similar results. Fail!!!

Biz: I hear you. I never quite understood how people could microwave a frozen meal every day with a full kitchen at their disposal. Heating leftovers would be preferable occasionally, right?

I guess that is at least better than eating out every day. Definitely less expensive.

hahahaha, I came via Jugalbandi's post and this totally made me laugh like crazy - for at least 10 min until tears started pouring which usually doesnt happen that easily. I have never gone in for packaged foods yet..but this post sure made me feel good about it! Guess better hit gym for extra hours than go for these :) Great post! Will revisit when I need something to lift me up :)

DK: Welcome! Glad you had a good laugh. I'm not always a funny funny gal but hope you'll check in regularly nonetheless. In between your visits to the gym, naturally.