To Link or Not to Link? The saga continues...

A not so short story to illustrate how messy this whole attribution of recipes thing can get.

You recall that shampoo commercial where a smiling model (with perfect hair) coos on camera about how she tried a particular product ? She talks about how she told two friends (here the screen shot of her smiling faces doubles)..."and they told two friends" (the screens quadruple)...her voice over continues "and so on...and so on..." as the television screen progressively fills with multiple shots of her smiling face with her impeccably styled blonde hair and the sound tracks multiply to reinforce the effect.

Then there is that HBO feature, "The Buzz". Celebrities are interviewed about their upcoming shows, about what they are watching, all intended to build interest on the part of the general public in whatever HBO is up to. The graphic for the feature is another illustration of how word of mouth multiplies, spreading the buzz throughout, well, throughout the "hive".

Yup. The hive. That'd be you and me, fellow honey bee. 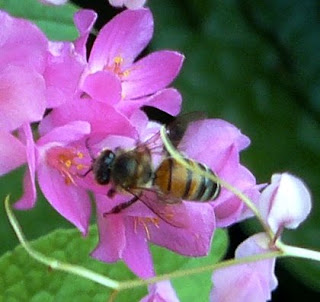 Recipes are similar, the enthusiasm about them spreads just like the excitement generated around a new show or a great hair care product.

Good recipes spread by word of mouth, or now more likely by post of blog, as each person posts, another person reads that, tries it and posts it, then more people read it and try it and post it and so on...and so on....

Case in point. Today I received email notification of a new post to a favorite blog of mine, "Feelgood Eats" written by Sue Bette in which she recaps a recent Canned Tuna "Quest for the Best" challenge, and shares a great summer salad recipe featuring tuna and green beans. 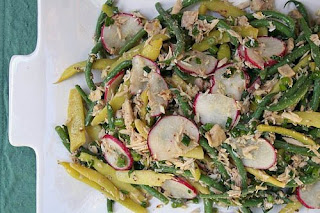 Feelgood Eats appeals to me not only because Sue Bette keeps an eye on the nutritional content and benefits offered by recipes, but she also demonstrates a consistent regard for the sustainability of the resources involved. She connects the dots for folks, showing the impact on the environment for eating certain foods or using certain products.

I share her concerns and deeply appreciate that she goes to the trouble to investigate and educate her blog readers as to why they should be concerned too. Feelgood Eats is all about whole, seasonal, and local foods. It is a great resource, accessibly written, and presents precisely the type of overview we need more of in food writing.

But back to the linking issue. I'd read the Canned Tuna Challenge and have some responsibly fished canned tuna already in my pantry. I was primed to make "tuna something". 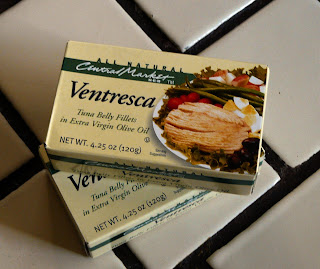 In today's post, Sue Bette presents a recipe that looks tempting to me but represents a combination my family wouldn't ordinarily go for. However, at the end of the post she has featured links to three additional recipes, one of which (Pasta with Tuna, Arugula and Hot Pepper) caught my eye immediately as a great prospect for dinner tonight.

So I point and click and voila! I am taken to another regularly visited and referenced blog, this one called "Simply Recipes" , featuring the writing of four different authors, including the originator Elise Bauer, who seems to be the writer behind the posts I am typically drawn to. 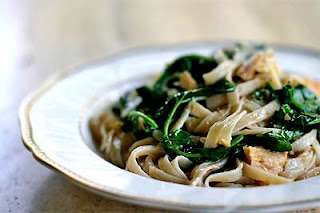 (photo credit Elise Bauer Simply Recipes)I check out Elise's post about tuna and pasta (referenced by and linked to by Sue Bette's post) and the second sentence reads "I came across this recipe on Sher's What did you eat? blog, where she got it from the San Francisco Chronicle."

I went back just to check, and the SF Chronicle recipe was featured on March 7, 2007. Sher's post on it was written several days later. Elise posted on it this March 14th, about a year later, and I just stumbled across this daisy chain of links to the recipe today, nearly five months later.

I am sitting in Central Texas in August of 2008 getting ready to gather ingredients to prepare a recipe that was originally printed in a San Francisco newspaper in March of 2007.

It will be a delicious dinner tonight, but it would never happen without people sharing the information, in this case via a series of linked blog posts.

Some would maintain that this increasingly typical manner of roundabout recipe sourcing potentially violates intellectual property boundaries, but I heartily disagree. I believe sharing is at least half the reason to formulate a recipe in the first place.

was printed specifically for people to use. Fletcher is the author of several books on food and wine, and her column has won several James Beard awards. I do not own her books and have not read them (yet) but feel secure the focus of her writing is to encourage people to eat and drink and enjoy doing so.

The recipe for pasta and arugula, along with several other really good preparations for greens (I encourage reading the whole article) was provided for folks to actually prepare the dishes and enjoy the meals, not just to read about it and forget. Further, the recipes allow readers not only to prepare the dish once and enjoy it, but to duplicate that experience on demand, and to share that freely.

The bottom line for me is this: a recipe holds and even gains value based upon it's utility to reliably produce an enjoyable dining experience. Aside from wonderful anecdotal surrounds several authors are known for, and the occasional line drawings or beautifully photographed food stylings included, published recipes exist to be put into practice, not admired as an art form.

As opposed to the recent dust up over that kitchen gang who seem to feel they can perfect a recipe so that it can only be used with credits and links by their permission and without any alterations or substitutions, most of the reliable sources for recipes are more than happy to have their recipes used, shared, and enjoyed.

Sure there are those exceptions, legendarily stingy local cooks who will share their recipes on request only to delete some key ingredient or technique note to insure that they and they alone are able to reproduce the results.

Enough is enough already. I propose we allow common sense and decency to prevail. Be honest, play nice, give credit where credit is due, but for heaven's sake when you come across a recipe that is great, don't keep it to yourself. Share it so others can benefit. Isn't that what writing about eating is good for? 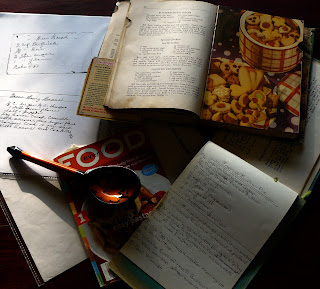 As the saying goes: Woes shared are halved. Joys shared are doubled. A good recipe is a joy. Share it!
Posted by TexasDeb at 8:36 AM