I Did It My Way

If this is not your first visit (and if it is - WELCOME!) then you already know I rarely just take a recipe and follow it as written. Pish, how easy would that be?!

I almost always end up changing something about a recipe and there are lots of reasons for this. Laziness, lack of ingredients, lack of a certain tool or piece of equipment, substituting in an ingredient for one I know somebody won't eat or substituting in an already prepared element for something a recipe prepares from scratch, reducing the quantities for our little party of two. They all apply from time to time.

Generally the direction I head with tweaking a recipe moves it from difficult to easier, from lengthy to quicker. But last night? Not so much. 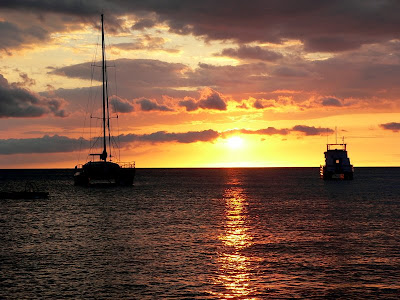 Last night I had planned a sort of Resort Adventure Dinner for my sweet husband because this summer we aren't taking any full on vacation trips. We are amongst the many this year who are trying out a "staycation" instead. Hubby and I used to take our family to the Big Island of Hawaii every summer for a stint at the Kona Village Resort where we all, young and old alike, could relax and play and eat and drink to our heart's content in one of the most beautiful places on earth.

I figured OK, we aren't going away, but that doesn't mean we can't have a wonderful evening meal. 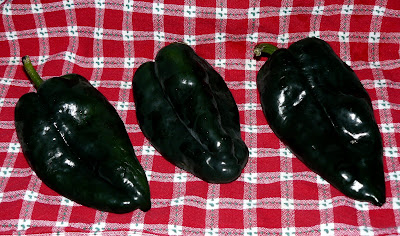 So when I spotted this recipe for Roasted Poblanos with Creamy Shrimp Stuffing in the Whole Foods newsletter I knew I had the start of something good.

You will note the WF version calls for frozen pre-cooked shrimp. Ordinarily I would be a fan of such a move. But now, when I am trying very hard to be more aware and more responsible with sourcing our food, especially our protein, it gets harder and harder to buy convenience foods with a clear conscience. 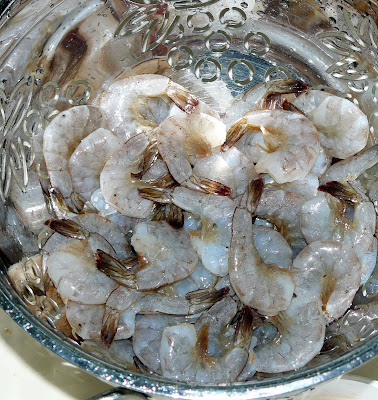 So ix-nay on the frozen aybeebay shrimp and hello to the bag of wild caught, responsibly netted shrimp already in my freezer that required cooking and shelling before I could begin to prepare the dish. Buh-bye speed and convenience, hello ability to sleep at night. Onward.

Here is the recipe as written. Following it I will list the other tweaks I made to produce a lovely resort style dinner at home.

Baby shrimp are widely available frozen and precooked, so keep a couple of bags in the freezer for a versatile ingredient for a variety of meals. Mildly spicy with a creamy filling and a crunchy golden cheese topping, these peppers are sure to become a summer classic. Serves 6

Meanwhile, put shrimp, sour cream, green onions, cilantro, cumin, salt and 1/2 cup of the tomatillo salsa into a large bowl and toss to combine; set aside.

Using a paring knife, scrape off and discard skin from peppers. Make one incision down the length of each pepper and carefully remove seeds. Stuff each pepper with some of the shrimp mixture. Pour remaining 1 cup tomatillo salsa into a large baking dish and spread out with a spoon to cover the bottom. 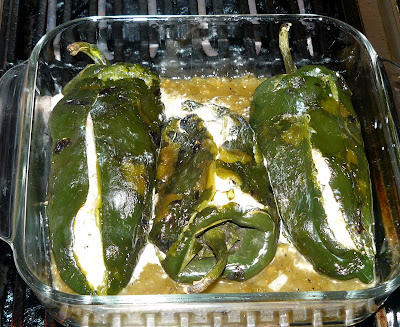 Arrange stuffed peppers in dish and top with cheese. Broil until cheese is bubbly and peppers are hot throughout, 5 to 7 minutes. Serve peppers with more tomatillo salsa spooned over the top, if you like. 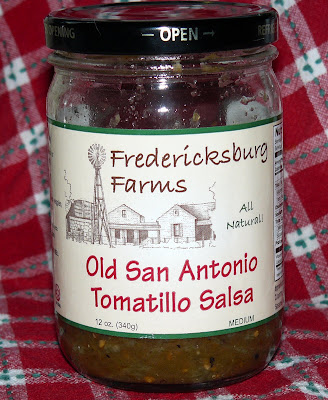 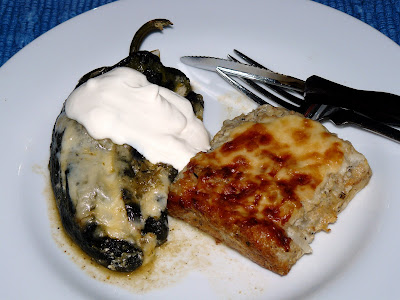 Now for my tweaks.

Obviously, I boiled, shelled and chopped my own (harrumpf!) responsibly netted shrimp. I reduced the recipe in half seeing as there are only two of us set to enjoy the results. I will admit that although I am warming some, I am not a huge cilantro fan. To me, when overused, it comes across as a soapy flavor that is way too reminiscent of certain episodes from my childhood when I repeated a term I'd overheard used by grownups that I was convinced would provoke gales of laughter and mostly provoked a quick swish with Ivory Soap as supervised by my Mom, instead. I had basil on hand, plenty of it, and had recently really enjoyed a shrimp with basil and jalapeño dish at Suzi's Chinese Grill. So cilantro was out, and basil was in. I had onions from my garden that were not green but are still fairly young and sweet so buying special onions was out and using the ones on hand was in. 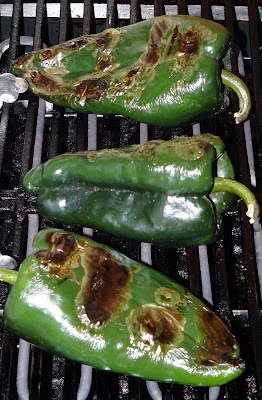 Finally, I just roasted the peppers on my grill because I wanted to work ahead and have the peppers sitting in a dish ready to bake in a 350 degree oven for 30 minutes while my husband and I sat out on our back deck to enjoy our view and a glass of wine, which we did.

Let's recap. I halved the recipe. Subbed in my own freshly boiled then shelled, cooled and chopped shrimp. I used basil for the cilantro, regular onion and oh, that's right- I served mine with sour cream rather than more salsa on top. I did spoon some of the salsa from the pan on top first but that seemed gracious plenty to me. I baked the recipe in the oven rather than sliding it up under the broiler. If I had used the broiler and left it on during the additional prep time it took me for the shrimp, I would have pretty much rendered my kitchen into a heat island all it's own. No thanks!

All the tweaks yielded a deliciously crisp yet creamy, mildly spicy reasonably light meal for two. I used up some of the rest of the eggplant casserole made earlier this week, it reheated beautifully in the oven right along with the peppers and was a nice balance to all the pepper biz going on in our entreé. 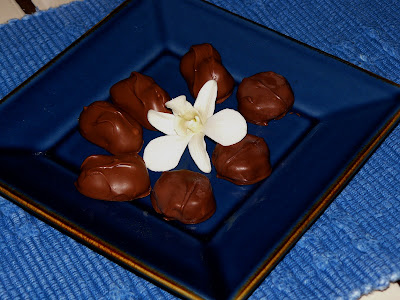 I finished up with some chocolate covered macadamia nuts plated with an orchid flower for fun. Not quite a trip to the islands, I'll grant you, but faster, less expensive, and a delightful finish to the work week and kick-off to a weekend of fun together in the Texas sun.
Posted by TexasDeb at 8:19 PM