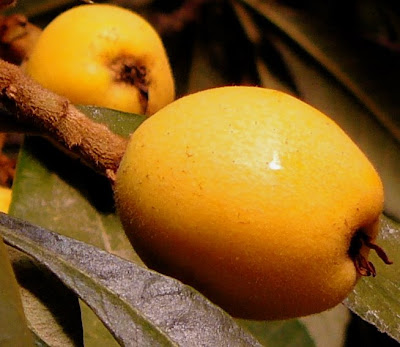 I am embarrassed to admit my family has been watching loquats ripen, fall to the ground, and spoil, all without even attempting to harvest any for ourselves. I can't recall how long this has been the case. I originally bought two loquat trees in one gallon planters over 15 years ago and now both trees are as tall as our two story house.

Similarly, I don't recollect when the trees began to develop full fledged fruit, but I do know that my neglecting to pick the dropped fruit up out of the area underneath the two mature trees at one point resulted in a sea of baby loquat trees, completely covering their part of the yard.

I finally reached my breaking point and decided to clear the small trees out. I gave away as many as I could and composted the rest. At least a half dozen times while I was clearing out one set of saplings, I'd be hit on the head by a small loquat falling to the ground. About the size of ping pong balls or smaller, they were strange to me, usually still fairly green, and just didn't seem worth the bother.

Somehow, all that changed. I don't know if it was all the rain last year, the result of clearing out the hundreds of tiny competitors for nutrients, or a certain age being reached, but this Spring our two loquat trees were noticeably laden with fruit. Good sized fruit. Good sized golden fruit, some of it at least ripening easily within reach of a ladder.

None of that might have made much difference except that I am different this year. Having read Michael Pollan's "Omnivore's Dilemma" and Barbara Kingsolver's "Animal, Vegetable, Miracle", I am determined to grow more of my own food. I was fortunate enough to score a spot on Tecolote Farm's CSA basket delivery list this Spring and have already stretched my usual choices of what to eat while meeting the challenge of preparing and cooking what is locally ripe.

On top of all that I have been working with my husband to take areas of our yard out of grass and into garden beds where we have planted native flowers, various culinary herbs, and several vegetables.

Bottom line, to have this abundance of fruit on two trees ripening within a few feet of my bedroom window was not an opportunity I would choose to miss again this year. Carefully opening a loquat, taking out the seeds, peeling it and slipping the slightly firm flesh into my mouth sealed the deal. They are a wonderful combination of peach, apricot and cherry flavors.

Out came the ladder and I hand picked a bag half full of loquats. 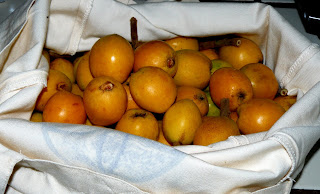 I've never made jam before, but with several pounds of ripe fruit on the kitchen counter and countless pounds more steadily ripening on the trees, I knew I'd have to find some way to preserve as much of this bounty as we could possibly eat, and share the rest with my friends, neighbors, and the local wildlife. (Credit where credit is due - the birds, squirrels and bugs have been enjoying our loquats all along. It was only the humans who were missing the loquat boat.)

I adapted the recipe for peach jam that came with the instructions inside the box of pectin:
4 cups finely chopped loquats, seeded, peeled, with inner membrane removed
2 tablespoons fresh lemon juice
5 1/2 cups sugar

Use a food processor on "pulse" to chop the fruit. Process it in two batches, pulsing 4-5 short bursts until the fruit is finely chopped but not pureed.

Remove from heat, skim off foam, and place in prepared jars for processing. Process in boiling water bath for 10 minutes. 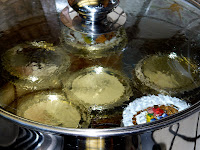 The jam has not cooled long enough for me to test for sealing or to try the results, but the jars sure enough LOOK like they've got regulation jam inside and the lids all popped, just like they were supposed to.

I did learn a couple of things. Loquats are much smaller than peaches so the work involved in pitting and peeling simply takes longer. It took me the better part of an hour to prepare the fruit for chopping. After that, everything went pretty quickly. I discovered that the loquat peel comes off easily - I could use the side of a spoon to both pull the interior membrane around the seeds off and to peel the skin. It often came off in only one or two large pieces.

I also decided that the jam recipes call for enough sugar that I will try a batch of not so ripe loquats next for a slightly tarter jam. Past that if I still have loquats available and the will left to preserve more jars, I will try to put together some version of a loquat/jalapeño salsa.

As a first time canner, I learned that size matters. Yes, sure, a no-brainer for real, but the jars I purchased were too tall to allow for 1-2 inches of boiling water to cover in the tallest pot I have. I figure on using those taller jars for other projects and I will keep an eye out for a taller pot at my local Goodwill store. And in the future I will buy shorter jars that will fit in the pots I have on hand.

I can barely wait for the jam to cool sufficiently to test if it sealed and set properly. 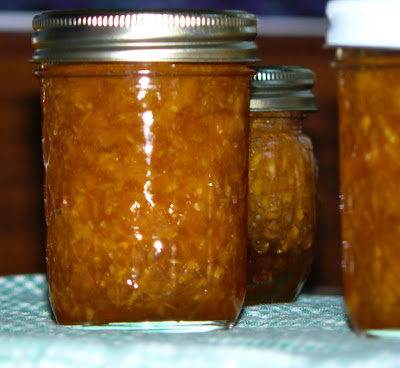 After all these years of looking at loquats, and pulling out baby loquat trees, it will be truly rewarding to be enjoying the fruit itself. In the next few days, I will prepare a pork loin with a loquat reduction sauce. Loquats, welcome to the family table.

If you have something you prepare from food you have grown - check out this web site dedicated to that very prospect:.

This sounds really tasty. Good for you for using the loquats you've been growing, and thanks for sending this post to Grow Your Own!

I used to live in an apartment complex that had a huge tree near the parking lot. But people were not interested in the fruit at all (except me). I really miss them now, but hope to grow my own tree soon. I love loquats, they are both sweet & tangy.

Hello Texas Deb!
I'm writing to you from a Television production company in Wales (UK). We are currently researching for an Item within a Nature series - and we wish to focus the Loquat fruit. We are having some difficulty finding the fruit - in any form at the moment. Do you happen to have any of the fruit still on your tree? do you have any whole loquat frozen o'r preserved in any way? do you possibly have some seeds left over from when you did the Jam? do you possibly know anyone in the area that sells Loquat in any of the above forms? I appreciate your help, and wish you all the best. God bless you.

EWJ: No fruit on the loquat trees at this time of year. Fruit occurs in the springtime only. Seeds might be found on the ground under the trees. Loquats are not native to our area - I feel certain you might find some in the UK in private gardens.

I'm not aware of anyone selling loquat fruit in the US.

All I have are photos and those are here on the blog. Best wishes!

Thanks Alot Texas Deb - very usefull to know! Have a good day!

I saw your post and looked up some information for you. If you type in Loquats and the city you are in, you may find the answer you seek. I found this link when I typed in Loquats UK.

I hope this information helps you.