What you see in your own garden might not be what you want...

but it is what you've got.  You might as well make your peace with that.

But oh, I so do not.  I am covetous of what I see on other folk's blogs all the time.  I fall prey to envy on every level, from the macro to the micro.  I want this flora, if I only had that fauna!  A portion of my angst revolves around timing, as I wonder why my own fill-in-the-name-of-your-recently-posted-blossom, hasn't bloomed here yet.

"OK," I thought to myself, "calm down, aphids are insect life too. Its totally cool the way the ants farm them, and maybe the little suckers will draw in some ladybugs.  Ladybugs are awesome.".

So this morning out I went with my camera, determined not to waste any more energy regretting what my fennel plants were not hosting, and to pay a little better attention to what was happening among the fronds.  I was not disappointed. 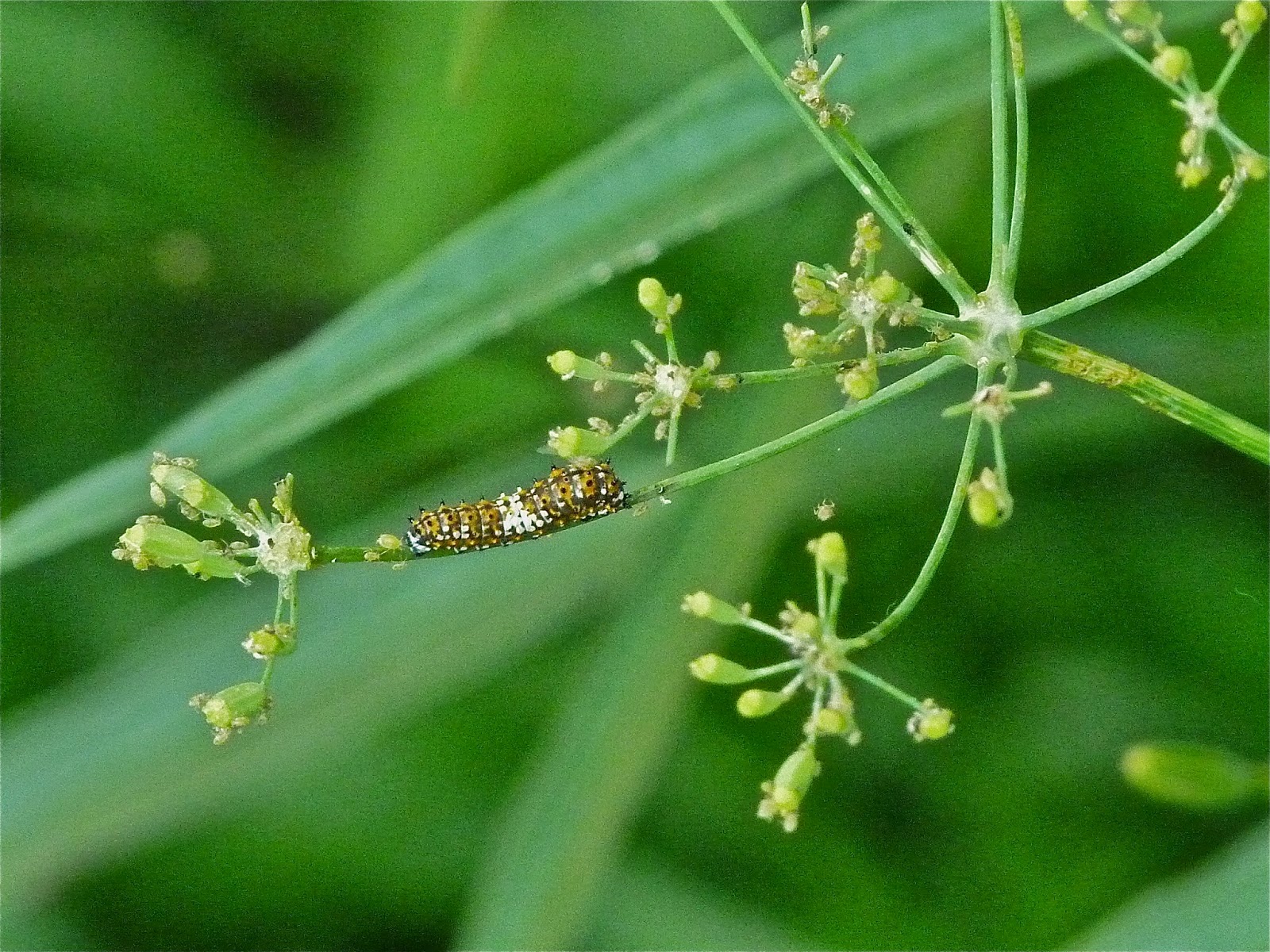 The usual suspects were there all right, aphids aplenty along with their farmer ants, but I also counted three or four eight-spotted forester moth caterpillars. 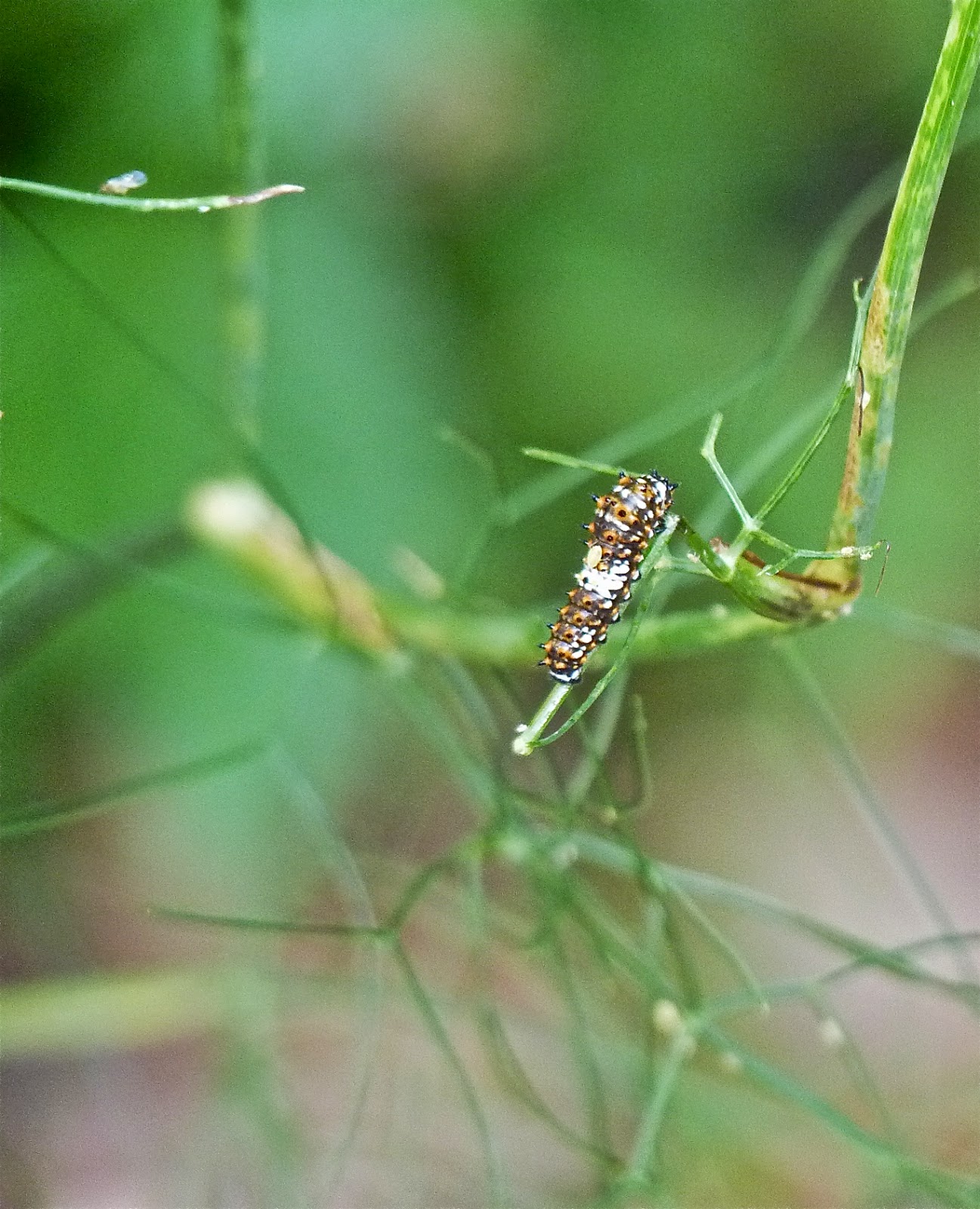 As I'd hoped for, with so many aphids in play, an adult ladybug was busy at work, eating her (his?) duly allotted five thousand plus aphids of the average ladybug's year long life span. 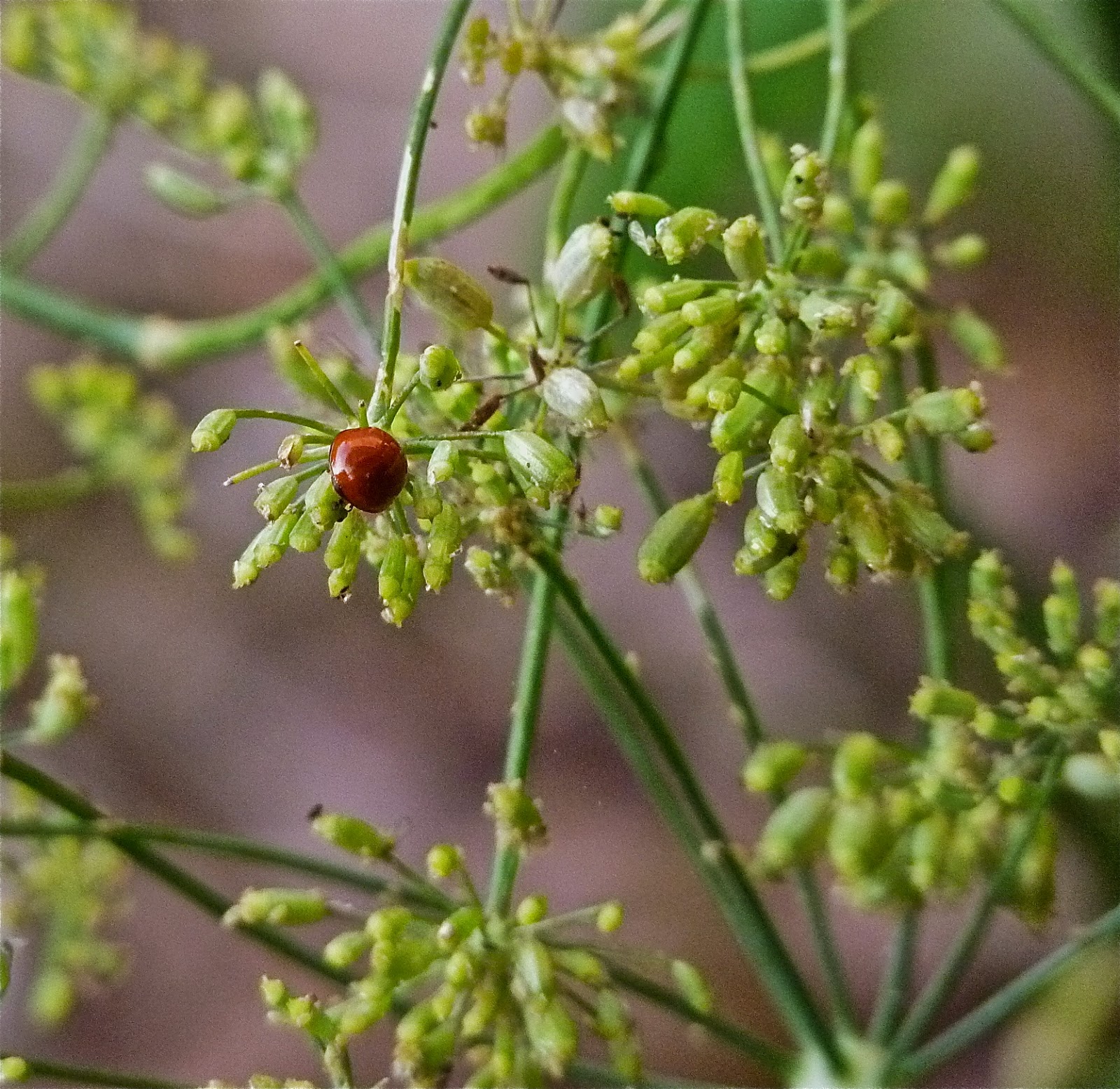 Also noted?  What I am pretty sure are Cryptolaemus montrouzieri larvae, which resemble a small mop head in action.  Looks like this one has something cornered there at the end of that frond. 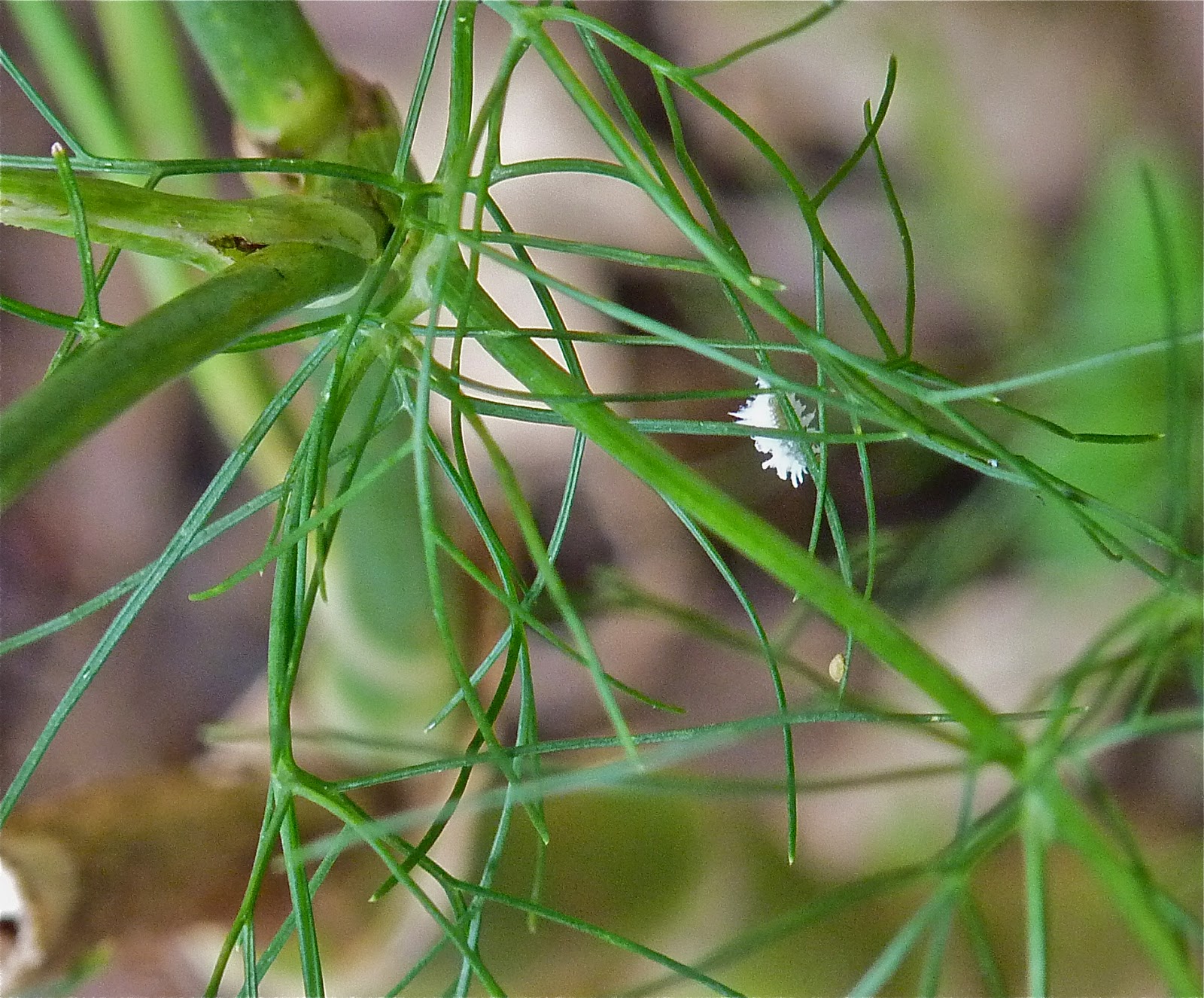 These preferentially eat mealybugs and are indeed commonly called Mealybug destroyers, but the larvae especially will feed on aphids when that's the predominant bug on offer. 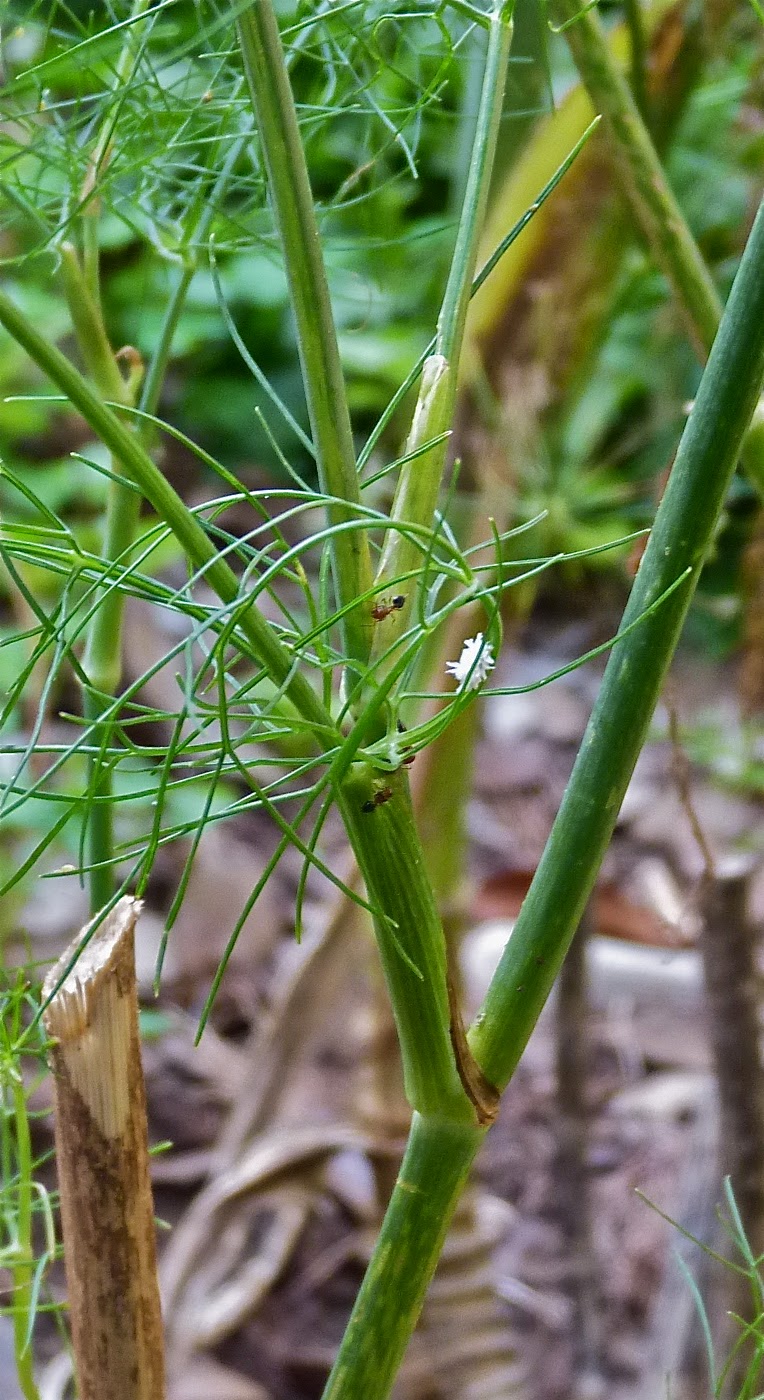 Cryptolaemus grow up to be another form of ladybug beetle, bicolored though unspotted, and as with their cousins, are native to Australia and New Zealand. They were introduced here as biologic control agents against agricultural damage caused by aphids, mealybugs, scale and the like.  The white stuff you see is a waxy substance excreted to discourage attacks, especially from ants, as the two insects have seriously competing interests concerning the best use of any given aphid population.

So maybe I don't have the targeted, coveted swallowtail caterpillars happily munching away on my aphid beleaguered fennel this year.  It is what it is. And I have seen swallowtail butterflies daily especially around our citrus plants.

Maybe I'll just wait a couple of weeks more before I count out the possibility of swallowtail caterpillars altogether.  Stranger things have happened.


This post is my contribution for August to Wildlife Wednesday, a new meme occurring the first wednesday of each month, fresh to the blogosphere and hosted by Tina at My Gardener Says. Thanks to Tina for hosting, and to you for reading. Glad you dropped by. Hope you'll feel free to post about your own wildlife, and join in on the fun.

Per Tina:  "Post your wildlife wisdom, then leave a comment on this (My Gardener Says) blog along with a link to your blog so all can share in new information, experiences and maybe even some chuckles about wildness in our gardens!"

Look at you and your caterpillars! It's so funny that you start with the envy-of-what-other-gardeners have thing. I was just looking at your last post, last night and drooling over the CandyLand garden you have and thinking, "Oh, that's so pretty." Ha! We all have that, I guess. Back to wildlife. The fennel has been so interesting to me this year, with the caterpillars, aphids, ladybugs, etc. I've left mine just to observe and it's been quite a show. Your photographs are great, as usual--that last shot of the giant swallowtail (/)--just perfect. Thanks for participating and keep an eye on that fennel--it hosts some cool stuff.

Tina: You too could have a CandyLand - grocery store bromeliads thrive in the shade as long as their little water cup middles are attended to. There's one by the front door I dump my overnight water glass into every AM. I think of us as symbiotic...

Fennel is becoming one of my favorite plants. None of the humans here want to eat it but everything outside wants to set up shop there. I have plans to put in more!

As Tina says ... great shots. =)
The first time I purposefully left aphids on a plant (with the hope of attracting lady bugs) I was pretty nervous. I worried that they would multiply to the point that they would spread to other plants. But it doesn't seem to happen that way at all. The lady bugs really did find them and ate them up. That fascinates me. And some plants reliably do attract aphids. Milkweed for one. I kind of think those plants must need aphids. I have thought that maybe the sucking causes the plant to produce stronger toxins. I would love to test that theory out someday.

I was leery of leaving the aphids to their own devices but I've done it without meaning to so many times I've gotten a bit careless about them. My fennel is looking pretty shoddy at the moment but is the plant's stress what drew the insects to it or did the insects create the stress? I'm going to plant more fennel in a sunnier spot next year and I'll leave this patch in its shadier place as a control. Science never rests!

I know what you mean. I get inspiration from other gardeners' blogs, but I also get envious. I constantly never have enough time to do everything I want in the garden - to plant the plants I want, to take care of everything just so and to manicure it to perfection. Oh well, my garden still brings me a lot of joy, as I'm sure yours does. You may not have the swallowtail caterpillars - but you certainly have the butterflies! Butterflies have been scarce in my garden this year. Only a few queen butterflies have been hovering around my garden.

Rebecca: Thanks for dropping in! I rarely get queens - have seen but one monarch here. I have trouble getting milkweed going though I hope to address that this coming fall. My point of course - we get what we get and ought to learn to work with the advantages our microclimates offer.

I love butterflies preferentially but am always happy to have bees buzzing - they seem a lot less picky about which flowers they'll visit. And, bees, you know? In trouble, absolutely necessary to agriculture on any scale large or small and anything I can do to help them out is my obligation and my pleasure.